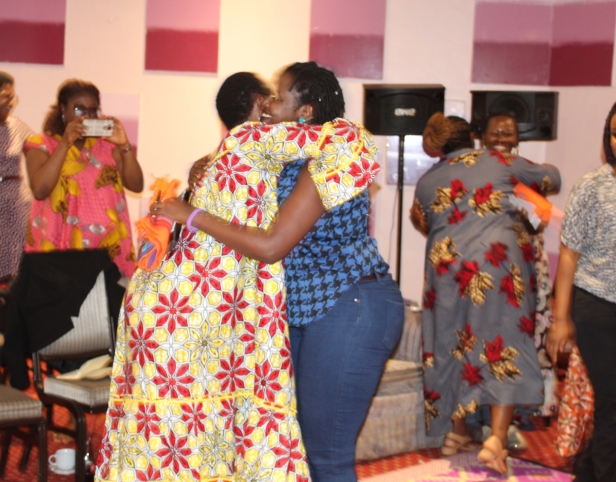 The essence smelt right, the candles burnt subtly but visibly, colorful mats, cushions and bitenges (African fabric) beautifully and skillfully laid out, it was time for the feminist dance. I have come to the realization that nothing compares to feminist spaces where we are free to challenge ourselves reenergize and re-strategize.

This is what the jointly convened Urgent Action Fund-Africa and Uganda Feminist Forum hosted by Akina Mama wa Afrika Sister-Sister conversation was all about. With the ever energetic Hope Chigudu as the chief steerer, Eunice Musiime the Executive Director Akina Mama wa Afrika and Jean Kemitare the program director at Urgent Action Fund Africa, the tone for the meeting was set as one to celebrate, connect and interrogate the state of feminist organizing in Uganda. The conversation was organized against the back drop of an Urgent Action Fund-Africa staff reflection and team building retreat held in Kampala.

The introductions and greetings were done in the native language which mirrored the diversity in the room, sisters had gathered from almost all corners of Africa. Why greet in the native tongue? Leah Eryenyu, AMwA’s Research, Advocacy and Movement Building Manager shared that it was to channel the authenticity of our native language and also because in our traditions, we genuinely wanted to know how the other person was. The sisters’ description of where they came from not only gave us a hearty laugh but we were also able to appreciate the diversity that was in the room.

To kick start the conversation, an opportunity was provided to Caroline Kiarie the Grant making Programmes Coordinator from Urgent Action Fund to share with the Ugandan sisters about UAF and areas of focus. An interesting concept of the Feminist Republik was also shared for participants to identify with and plan to connect.

Did you know that women have been organizing even before the colonial period, that the despotic times of Idi Amin Dada never stopped them either? A study commissioned by UN Women Africa and presented by Ms. Florence Butegwa on the State of Women’s Movement in Uganda provided the foundation for the conversation. The study revealed that the movement is still vibrant despite its fortunes being tied to the political economy of the country at each of the critical moments of organizing. The study found that the women’s movement is modest in documenting and claiming both visible and invisible achievements in their work making it easy to quickly move onto the next challenge without owning successes.

The study further affirmed strong partnerships that the women’s movement has fostered with the state and other critical stakeholders. It was indicated that the women’s movement was key in having the inclusion of Chapter Four in the constitution and ensuring that the constitution was gender responsive. The movement, it was noted has built capacities and produced women leaders, women that are now leading institutions and regional organizations. The movement through the Uganda Feminist Forum has provided a platform for getting a lot more young women involved in the movement.

However the women’s movement has also been constrained by limited funding to the feminist ecosystem, shrinking space for organizing, limited rural-urban linkages, low documentation and tensions between generational approaches to organizing. Florence noted that that the diversity should be channeled towards strengthening the movement rather than a point of diversion and conflict.

The August sitting was equally resolute that there is need for greater investment to truly transform the women’s movement into social movement where all diversities are appreciated and included, ensure that our practices are informed by theory and popular feminist education to raise consciousness on gender inequality. The convening ably reflected the resolute with a diverse panel that comprised of Dr. Josephine Ahikire an associate professor at Makerere University school of Women and Gender, Jay Abang, a queer feminist working with Health Rights Initiative and Khatondi Soita, a radical secularist feminist who is a law student at Makerere University.

Dr. Josephine emphasized that the women’s movement is a social movement, one that exists because there’s a system of oppression against which all women in their diversities are fighting. Ms. Khatondi stressed the importance of naming, the systems of oppressions we are fighting to dismantle and naming ourselves as feminists. While answering whether we can talk about the women’s movement without NGOs, Jay Abang mentioned that to a larger extent it is not possible for it is the NGOs that create funding avenues and spaces that facilitate the continuation of the work of the movement.

“The very critical nature of feminism instructs us to interrogate power, grounded and rooted in our history and context and appreciating that such spaces enable us to deconstruct these aspects.” – Ndana Tawamba, the Executive Director of Urgent Action Fund-Africa.

What is a feminist gathering without a celebration of life and love? The evening was summed up with entertainment by songstress Afrie and poet Arinda Daphine. We ate, danced, sang and praised the Goddess for a successful rejuvenating convening. Ooh, there were lots of hugs.

Uganda Feminist Forum 2019: Call for Papers and Art–Deadline Extended to 23rd June
A new frontier on tax justice from a feminist perspective in Uganda
Catalysing a Movement of Young Feminist Leaders in Uganda