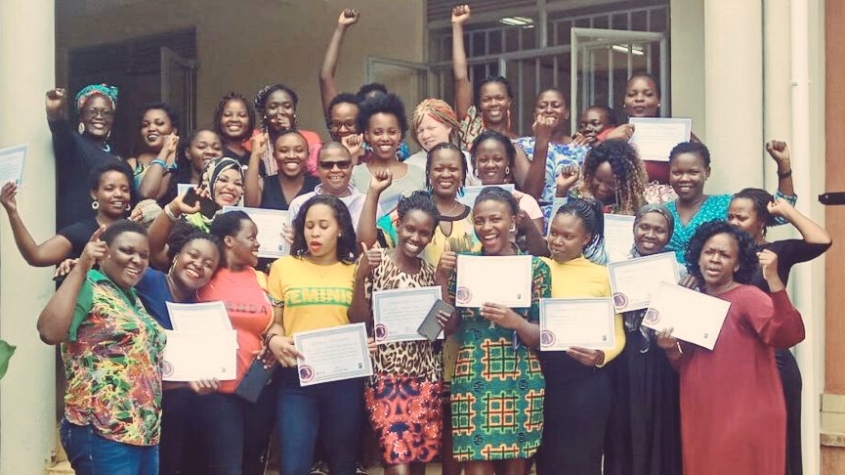 The 25 young women who were trained, capacitated and released to the Feminist movement in Uganda together with AMwA staff and faculty

Seeking to strengthen existing and build new alliances and networks to challenge oppressive norms and power structures in Uganda through collective voice and movement building, Akina Mama wa Afrika with support from the Open Society for Eastern Africa (OSIEA) conducted a five day Feminist Leadership & Movement Building training from 18th – 22nd February 2019 for 25 young women in Kampala, Uganda. The training targeted young women in their diversities with demonstrable leadership qualities and interest in advancing women’s rights with an aim of strengthening their feminist and transformational leadership capacities to effectively participate in leadership and decision making.

Governments in Africa have made legally binding commitments to respect, protect and fulfil women’s rights, recognizing their intrinsic value as well as the synergies between women’s rights and wider prosperity. The translation of equality before the law into positive outcomes for women has remained problematic. Entrenched inequalities, discriminatory social norms, negative cultural practices and dominant patterns of economic development have hindered implementation. Women’s rights matters are continually pursued with a slow pace while the situation of women remains precarious.  In Uganda, as a result of limited participation in political and decision making spaces, women have endlessly faced multiple discriminations and injustices such as violence against women, unpaid care work, discrimination in employment to mention but a few. This state of affairs underscored the urgent need to build a strong and accountable movement, held together by solidarity in sisterhood, and an unimpeachable value system; so that it is able to withstand pushback from those with power, and collectively make demands for women’s human rights and reject a culture that normalises injustice.

The training covered the modules of Personal Mastery, Feminist Theory and Practice, Feminist and Transformational Leadership and Understanding My Human Rights of our African Women’s Leadership Institute (AWLI) and was facilitated by Ms. Hope Chigudu, Tushabe wa Tushabe, Ms. Mildred Apenyo and Ms. Eunice Musiime, our Executive Director. Personal mastery allowed the participants to not only locate themselves as activists, but also provoked them to reflect on different aspects of their lives in terms of practices, development, well-being and self-care as critical components of feminist leadership development. During the session on Feminist theory, the young women linked their gendered experiences to more systemic factors that denote the nature of struggles of women in society particularly in the context of Africa as an approach to theoretical underpinnings of how feminist theory, analytical frameworks and ideologies have evolved. In learning about feminist leadership, the sisters realized that the practice and application of feminist leadership demonstrated the different forms of using power for social transformation. One of the key aspects of feminist leadership highlighted was building both individual and collective leadership for movement building to amplify the voice of feminism.

As with all AMwA’s leadership trainings, the training adopted a participatory mode where group work was employed as well as using creative ways of delivery such as nature walks and role plays which generated discussion and enabled participants to reflect and apply the content of the training to their lives. Some of the other key themes highlighted during the training were the need to understand human rights and women’s rights and their links to attaining feminist goals. Participants reflected on the different ways they have been agents of patriarchy chief of which was the subconscious prioritisation of men over women in their lives. At the end of the five-days, the young women were able to make commitments to the feminist agenda and the fight for women’s human rights. They identified issues of concern to women in Uganda and developed plans that they would carry forward at personal level and as a collective.