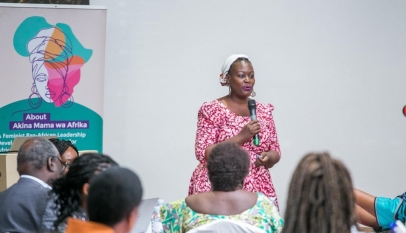 The symbolic status, tokenist, and descriptive representation of women in decision-making and political spaces calls for a radical political transformation in the hegemonic structures, systems, and societal norms if women are to lead and thrive in public leadership, especially in visible spaces such as politics. Women leaders are persistently scrutinized on issues as broad-ranging as their suitability and capabilities to perform leadership roles, considered subordinate to men in leadership, and experience disproportionate visibility and systemic discrimination. Despite decades of affirmative action and interventions geared towards addressing structural inequalities, women remain underrepresented and with limited influence in decision-making and political spaces.

Our calling as AMwA is to disrupt the dominant patriarchal leadership and infuse feminist and transformative leadership approaches as an alternative model of leadership.

It is also imperative that the new form of African leadership whether in government, politics, private sector, civil society, and scholarship, constructively interrogate the obtaining realities in their different fields of work or existence from a decolonial approach. This interrogation can take many different forms and guises, but central to such analysis, there must be an eagerness to challenge established norms and theories in order to bring new thinking to subjects such as economics, leadership, and development as now even the established former neo-liberal economists have been questioning what used to be preached as fact. In the wake of the COVID-19 Pandemic and the economic stress, macroeconomists from various ideological backgrounds are now re-examining some of the discipline’s dogmas, questioning what were thought to be infallible certainties, and stressing the importance of new knowledge. Hence, the need for a feminist pan- African leadership approach to women’s political and civic leadership and Africa’s development becomes imperative.

The Power of Dialogue programme seeks to enhance the collaboration of political and civic actors to participate in accountable political processes. The power of dialogue is an opportunity for creating intersectional spaces of engagement between civic and political actors with a special emphasis on women, youth, and other marginalized groups such as differently abled people; to jointly contribute to shaping the agenda for dialogue with a view to realizing the much needed synergetic progress on the governance front. The Power of Dialogue programme is being implemented in Uganda, Kenya, Ethiopia, and Sudan by a consortium steering group comprising Akina Mama wa Afrika, Center for the Mediterranean and International Studies, Gorée Institute: Center for Democracy, Development, and Culture in Africa Netherlands Institute for Multiparty Democracy. Read the press release here