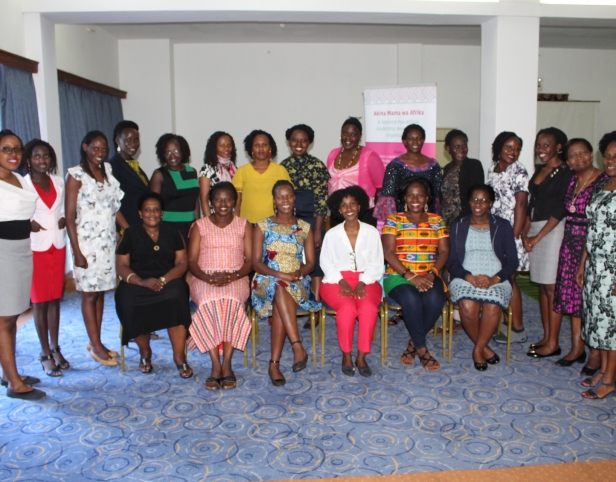 Thursday 22nd August 2019 had a whiff of history about it as 27 women gathered to demand a seat at the table of tax discourse. On that day, two births of note happened; first AMwA began in earnest, the project on plugging illicit financial flows for women’s economic empowerment and secondly, a movement of women-led tax justice advocates was born.

Men overwhelmingly own the factors of production. An Oxfam statistic states that men own 50% more of the world’s wealth than women and 86% of corporations. This concentration of wealth gives men immense power to control and influence social, cultural, political and economic dimensions of people’s lives.  It is no wonder therefore that discourse on the economy, and taxes in particular are dominated by men who create policies in their favor that allow them to amass even more wealth at the expense of billions of people, many of them women.

In 2015, the Mbeki High Level Panel reported that Africa loses about 50 billion US dollars annually to illicit financial flows. Although illicit financial flows can be categorized as money gained from criminal activity (human trafficking, poaching), or from corrupt dealings, the bulk of the resources are lost through tax abuse (tax avoidance and tax evasion). In Uganda, about 2 trillion shillings is lost annually to trade misinvoicing which is a neat trick corporations use to either under declare or over declare the value of goods, depending on whether or not it will lessen their tax burden. The amount of money lost here alone could almost fund the entirety of the 2019/2020 health budget in Uganda.

In “All About Power,” Srilatha Balitwa posits that in order to challenge injustices, we need to understand power and how it manifests. In the same spirit, the women convened to deepen their understanding of illicit financial flows, and to identify the sites of power that drive tax injustice and to unpack how this impacts gender justice. Participants at the convening learnt that enabling factors for illicit financial flows are numerous. One of the reasons discussed was the global financial system that is set up to benefit the global north at the expense of the global south, in a continuation of extractivism and exploitation along colonial lines.

Africa is said to be a net recipient of aid. About as much aid comes in to Africa as leaves in the form of economic exploitation, building the economies of the world’s global cities such as London and Zurich. This is in no small part contributed to by tax wars waged by low developing countries as they try to attract foreign direct investment (FDIs). In order to attract FDIs, countries lower their tax rates to make the prospect of doing business as attractive as possible. This practice is encouraged by the World Bank and International Monetary Fund structural adjustments policies which encourage poor countries to liberalize and open up their economies for private entities. IFFs also continue unchecked because of secrecy jurisdictions in tax havens which allow a veil of secrecy that enable companies to operate without disclosing their financial information. The extraction from poor countries is also enabled by Double Taxation Treaties which advantage corporations to pay taxes in jurisdictions where they will pay very little or no taxes at all, at the expense of the poor communities with less negotiating power.

Why should women care about this at all? Ms. Jane Nalunga, the Country Director of SEATINI criticized the phenomenon of pink washing; where companies do not center the experiences and demands of women in engagements but instead simply tack a “with a gender perspective”  to appear progressive. This convening looked to push back against that exactly. It sought to move women’s voices, opinions, experiences and impacts on taxation from the margins to the center. The majority of women do not own personal wealth which means that resource mobilization for the greater good is of great interest to them.

With the continued loss of resources to IFFs, the gendered impacts are immense. With a reduced resource basket because of IFFs, finances that would have been used for public services such as health, education and care services on which women depend are cut. In a society where women are primary care givers in hospitals, and spend a considerable amount of time on unpaid care work such as babysitting, an infrastructure that responds to these needs with paid hospital minders and public day care centers would reduce this burden considerably. IFFs also encourage states to pass regressive tax policies that shift the burden of tax payment to the already poor through increasing taxes on commodities. Since women spend the bulk of their income on household items like cooking oil, sugar and soap, a Value Added Tax on these commodities shifts the burden to them. Furthermore, with a small resource basket, countries rely more and more on debt financing and debt repayment at the expense of basic services to the poor. Uganda’s debt servicing bill was the second highest item on the budget at 2.9T shillings, ahead of the health budget.

The laws against IFFs in Uganda are lacking and outdated. The repercussions are not strong enough to deter the vice while implementation remains limited – Hazel Birungi

All these factors helped to clarify why it is important to emphasize and centers the gendered impacts of illicit financial flows. The meeting ended with participants drawing up strategies on how to tackle the problem locally and globally. Some of the clear advocacy issues identified included the need to engage with policy makers to renegotiate some trade and investment policies which have disadvantaged the country.  The collective also explored avenues for connecting to global tax justice movements including drawing on recommendations made in the Bogota Declaration on Tax Justice for Women’s Rights. What was clear at the end of the convening was that the women were ready to invade and occupy spaces that have historically been closed off to them in order to influence policy and practice in their favor.

Making Tax A Women’s Issue
Where is the money? Why Illicit Financial Flows Are a Violation of Human Rights.
Catalysing a Movement of Young Feminist Leaders in Uganda