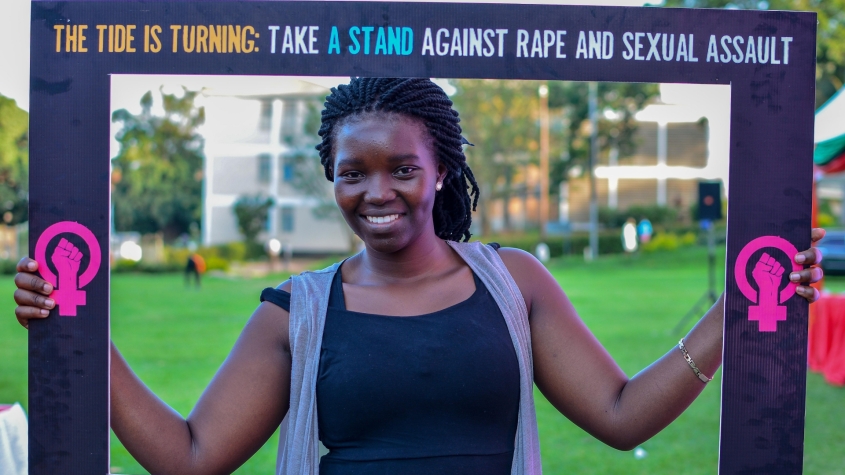 In April 2018, Rachel Njoroge Njeri reported Edward Kisuze an administrator at Makerere University to the police for sexually molesting her. He was proved guilty and suspended from Makerere University which sparked off a debate on sexual harassment by staff at Makerere University on different social media platforms. Female students in higher institutions of learning have for a long time had to endure sexual harassment which has consequently bred a culture of stigma, trauma, loss of self-esteem and poor performance among others. In Uganda, sexual harassment is one of the under-reported crimes due to the fear of being stigmatized and retaliation from the offender thus making the environment for the victim more hostile. This makes endurance a common response for young women to sexual harassment. Sexual harassment is a form of violence against women; it is a prohibited and unwanted behavior that causes harm to the victim. Despite both national and international efforts to eliminate this evil, there is still an increase in the number of cases reported.

Femme Forte in partnership with Akina Mama wa Afrika and Urgent Action Fund hosted an equip circle on 30th August 2019 to address sexual harassment at institutions of higher learning. The equip circle created a safe space for young women to have an in-depth and thorough conversation on the definition and manifestation of sexual harassment. The equip circle targeted 30 young women from institutions of Higher Learning and 5 women from the mainstream women’s movement that are doing work around harassment. Participants were drawn from an online application system of registration as well as letters to the student guilds to nominate young women to attend.

The equip circle created a safe space for young women to have an in-depth and thorough conversation on the definition and manifestation of sexual harassment.

The conversation was facilitated by Leah Eryenyu the Research, Advocacy and Movement Building Manager. She led the young women into identifying their expectations which were mainly learning and unlearning certain concepts, understanding why sexual harassment is a continuous issue and how to address the issue. In response to the expectations, Ms. Eryenyu noted that not all expectations might be met during the equip circle but in 4 months, a series of talks were going to be organized. She highlighted that it was a safe space to talk about these issues without judgment or intrusion and keeping things in confidence, so as to begin in the process of healing for our sisters.

Leah added that the reason why the equip circle focused on sexual harassment at university was because of the incidents on the media where a custodian in a renowned student’s hostel called Olympia in Makerere, Kampala was sexually harassing the female residents. The young women started an online petition to kick out the custodian.  The Gender Minister of Makerere University student’s guild organized a consultative meeting with various stakeholders to discuss a way forward. In this meeting, it was agreed that the gender minister would set an ultimatum for the management of Olympia to suspend the custodian and allow further investigation. On the 20th of August 2019, the custodian was finally suspended from the hostel.

She noted that the conversation was to define sexual harassment and how it manifests and why there is need to create a space for sharing. From the sharing by the participants,, it was observed that sexual harassment in many educational institutions majorly happens due to the manifestations of unequal power relations, where women are most likely to be victims of sexual harassment because they more often lack power, are more vulnerable, are insecure, lack confidence, and have been socialized to suffer in silence. Students raised cases including being asked for sexual favors, erotic language, and unwelcome physical conduct of sexual nature.

She asked what the participants’ experiences were with taking course units with a known abuser. In response to this, it was mentioned that students give each other tips such as avoid smiling, and missing lectures. She added that there was a myth that when a woman’s no, means hard to get. We live in a culture where women do not have sexual urgency and if they do then they are labeled sluts. Some cultures say that a man should not be refused and that a woman’s no, is never that, she will eventually say yes.

We live in a culture where women do not have sexual urgency and if they do then they are labeled sluts.

Also, many girls believe that in order to keep a relationship, you need to have sex with the guy. Some girls at the university feel obligated to wash and clean a guy’s house, dubbed as housewife duties. When a girl is friendly with boys and gets sexually harassed then she is blamed.  She narrated a case of a musician who denied the pregnancy of a woman because she was physically disabled. He claimed that he could not have had relations with her until she showed evidence of their naked pictures.

Students requested for such conversations given that they were not informed of sexual harassment broadly and safe spaces where they can run to for support without being ashamed or victimized. They promised to always speak up in case of such issues and requested for counselors they can talk to where they need support. Ms. Penelope Sanyu, the Executive Director of Femme Forte thanked participants for committing to share and show up. She urged them to trust one person with their story.

16 Days of Activism Against Gender Based Violence
Challenging and Transforming Male Privilege and Power to Tackle Sexual Harassment, Rape and Defilement
Building a Movement of Young Women Equipped To Respond To Limited Participation of Women in Leadership and Decision-Making