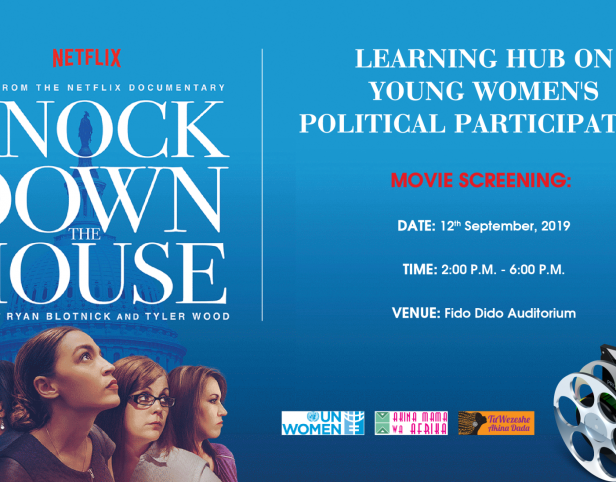 Young women in politics suffer double discrimination by age and gender despite women’s proven abilities as leaders and agents of change as well as their right to equal participation in political processes. While all young people are hindered from participating in active politics because of their lack of experience, young women are doubly hindered because of patriarchal perceptions and sexism. Such structural challenges coupled with limited access to finances, sexual harassment further keep young women from getting involved in democratic governance. Among other avenues such as leadership trainings and mentorship programmes, for young women to effectively participate in leadership and decision making spaces, there must be a robust support system to uphold them on their political journeys. With the power of a Feminist movement behind them, young women in politics will be supported to take up space beyond dancing at political functions.

With this in mind, Akina Mama wa Afrika held a learning hub session on young women’s organizing in leadership reflecting on the strength of autonomous movements to bring out about lasting change. The learning hub sessions are quarterly gatherings aimed at deepening young women leaders’ knowledge, advocacy skills as well as providing a space of sharing ideas and acquiring skills to effectively influence key stakeholders, politicians and policy makers around key feminist and women’s issues. Integrated into this initiative is that the young women leaders disseminate the knowledge they gain to their networks.

The conversation was primed on the screening of the documentary, Knock Down the House (https://www.youtube.com/watch?v=_wGZc8ZjFY4&t=2s) which sparked off conversation around grassroots organizing and identifying alternative leaders to the current establishment who will deliver the change the country and especially women need and to unearth the difficulties of running a campaign as women, younger and older. Knock Down the House is a 2019 American documentary film directed by Rachel Lears. The film follows four female Democrats who decided to run for Congress in the 2018 United States elections: Alexandria Ocasio-Cortez of New York, Amy Vilela of Nevada, Cori Bush of Missouri, and Paula Jean Swearengin of West Virginia.” It revolves around how a young bartender in the Bronx, a coal miner’s daughter in West Virginia, a grieving mother in Nevada, and a registered nurse in Missouri build a movement of insurgent candidates to challenge powerful incumbents in Congress. One of their races becomes the most shocking political upsets in recent American history.

Moderated by Helena Okiring, a movement building coach and  a TuWezeshe Akina Dada mentor, the conversation featured a panel comprised of Hon. Alice Alaso, a former member of Uganda’s parliament and the current Deputy National Co-ordinator of Alliance for National Transformation, a newly formed political party in Uganda; Phyllis Wanjiru, a young queer woman passionate about changing the dynamics of HIV programming for LBQ women and Naima Isa, a legal and youth officer at the Young Women’s Christian Association (YWCA). In the discussion, the panellists spoke about their lived experiences in leadership in comparison to the lives depicted in the documentary. These included having to mobilise and build networks from the grassroots having come from hard up backgrounds but also being women.

All driven by the desire to fight injustice, some of the challenges highlighted by the women leaders included sexual harassment, gendered demands of their lives such as ‘balancing politics with their personal relationships and the overall lack of resources. They attested to the fact that belief in self is key in keeping women in decision-roles in a patriarchal world. A key outcome from the conversation is that Betty Mujungu, a TuWezeshe 2017 fellow declared that she would be contesting for Member of Parliament for her district in the 2021 general elections.

By strengthening the AMwAzon’s movement and building alliances with similar movements, AMwA hopes that oppressive norms and power structures will be challenged through collective voice thus contributing to increased representation of young women in leadership spaces.

“For one of us to make it through, a hundred of us have to try.” –Alexander Ocasio-Cortez, youngest woman in the U.S. Congress