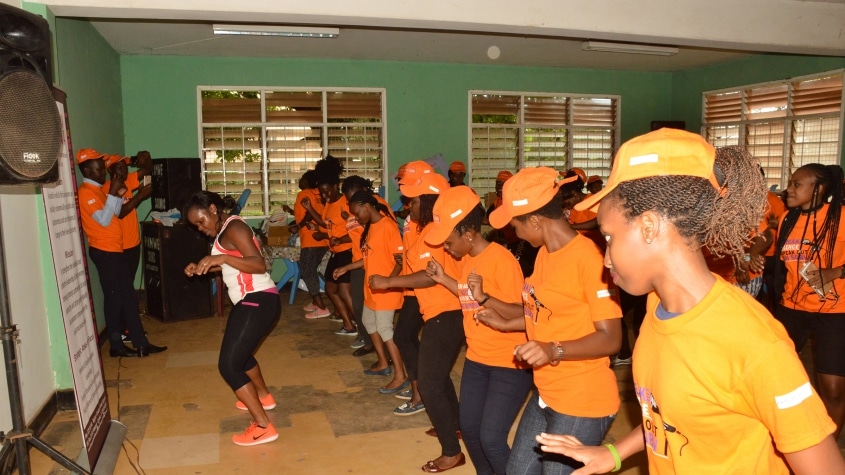 “I heard of a student couple where the girl would be beaten by their boyfriend. They rented a hostel room together. It is common for couples to co-habit.”

Sexual and gender based violence is undeniably an all-too common and devastating challenge that continues to shake us every day. For women and girls at the university, cases of being sexually harassed at internship sites or even by friends while having fun at bars flood the media on a daily basis. To make matters worse, the brave survivors of these acts against humanity have literally nowhere to run since some of the available policies are lacking and the police stations do not have special reporting procedures for rape and sexual assault. Such violations against women and girls are key in frustrating ambitions of achieving Sustainable Development Goal 5 on Gender Equality and Empowerment of Women. Akina Mama wa Afrika was delighted to join the rest of the world in commemorating the 16 days of activism against sexual and gender based violence. For us, it was time to challenge and contest male engagement in the fight against rape, sexual assault, exploitation and harassment.

In line with our strategic objective of increasing recognition of women’s rights, gender equality and women’s empowerment in decision-making fora at all levels, Akina Mama wa Afrika took last year’s 16 Days of Activism Campaign to Makerere University in a bid to confront the vice that violence against women and girls is at the university. We recognize that gender equality cannot be achieved without the involvement of men and boys because improving women’s status and advancing their rights yields benefits for whole societies, not just women and girls. However, the change we seek is taking a snail pace.

Responding to this, we crafted ways on how to effectively engage men in preventing and mitigating against violence at the university, in communities and even at home. Recognizing the multiple roles men play not just as perpetrators, but also as partners and family members, as witnesses, as service providers, as community leaders and decision makers, and in some cases, as survivors themselves, we stepped out to encourage men and boys to abandon harmful stereotypes, embrace respectful, healthy relationships, and support the human rights of all women, everywhere.

Akina Mama wa Afrika successfully hosted two key activities under the theme: Are You Man Enough to Stop Sexual and Gender Based Violence? The purpose of the activities was part of efforts to eradicate sexual and gender based violence especially at Makerere University by cultivating environmental awareness. Two Zumba and Aerobics Classes Against Sexual and Gender Based Violence were held at Mary Stuart and Africa halls to establish a platform for students to create a public dialogue on sexual and gender based violence. The discussion created a much needed space for sharing of experiences and identification of strategies to address escalating sexual violence cases at higher institutions of learning. The extensive discussions highlighted issues of power dynamics, socialization, traditional and cultural practices that continue to push men away from the fight against Sexual and Gender Based Violence not forgetting the outcry that they too are victims. AMwA recognized the need for increased efforts in creating awareness against SGBV as many students lack concrete knowledge about the vice.

“Ending Sexual and Gender Based Violence is our generational challenge. Men who use violence have been socialized to believe that it is natural, it is not! Misogyny hurts men too and they must stop being bystanders. Break The Silence! End the Violence!–Eunice Musiime, Executive Director, Akina Mama wa Afrika

In addition, Pearl Mirembe, Maria Alesi, Patricia Humura, and Andrew Karamagi were hosted in a tweet chat on 30th November 2017 in collaboration with the Center for Constitutional Governance. The chat was aimed at challenging male engagement in the fight against violence against women and girls. The discussion was held prior to the 16 days of activism campaign at Makerere University to create awareness about the Zumba against SGBV event at Makerere and also bring together thoughts from the online audience on how men can be engaged in the fight against sexual and gender based violence. The key issues that stood out include the fact that a lot has to be done to realize full and effective male engagement and de-construct the social and political structures.