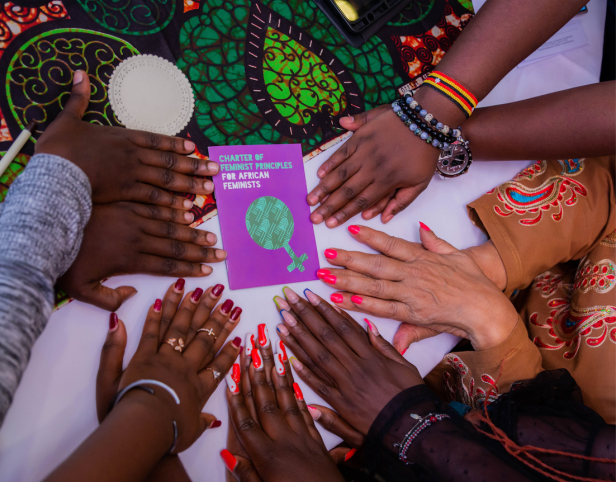 On a cool September evening, somewhere in Kampala-Uganda, a hall rang with peals of hearty laughter typical of old friends reuniting and the bubbly chatter of new friendships in formation. Wherever the eye rested, stirrings of joy abounded. In one corner, gifts of artisanal soap and scented candles passed from one hand to another, while in another corner, bits of news, personal and national, were traded.

These joyous sights and sounds belonged to a group of sixty African feminists who had come from Sudan, DR Congo, Uganda, Ethiopia, Tanzania, Kenya, and Rwanda to convene for the East African Regional Convening organised under the umbrella of the African Feminist Forum. At this forum, African feminists gathered to spend some time deliberating on strategies to counter the gale of fundamentalism sweeping across the world and with it, bearing seeds of conservative heteronormative patriarchal ideals, rigid homogeneity, and fascism.

Under the steerage of feminists of varying identities, the event ran from 25th to the 28th of September and featured a profound discussion examining fundamentalism and how it manifests in governance, the economy, and individual spaces. These feminists are committed to the cause and are organising on various fronts; academia, grassroots movements, non-governmental organisations, and political leadership among others.

Through its track record of oppression and destruction, fundamentalism as we have come to know it in historical and contemporary times is indeed a fatal social poison that wounds and kills both the flesh and spirit. There’s never been a better time to take on this sinister force that is chiefly designed to subdue. The zeitgeist demanded that feminists convene to confront this wave of fundamentalism that was causing the rollback of the rights of women, girls, people from the LGBTQIA movement, and other marginalised populations.

To infuse the participants with the mojo needed to take on the task of confronting and strategising against fundamentalism, the fiery Kenyan feminist scholar Dr. Awino Okech, was elected for the task. Ahead of the reflection, Dr. Okech set out to name the creature we were up against and lead us into a study of its anatomy before returning to the furnace to forge a weapon for it. Dr. Okech offered much-needed insights on the subject through her keynote speech, pointing out that fundamentalism sits at the intersection of belonging, authoritarianism, and religious fundamentalism and that it takes on different forms in different contexts.

Using historical and contemporary examples at national and global levels, from Germany, India, Brazil and Kenya, Dr Okech explained that fundamentalism which often combines nationalism and religion is a reaction towards the advance of modernity and also nostalgia for the past. She further pointed out that the advance of fundamentalism manifests in the form of moral panic that culminates in moral policing through surveillance and curtailing civil liberties.

She shared examples of Iranian women protesting against the veil as part of their broader struggle for transformative justice, the election of a hyper-religious president in Kenya, Italy’s ushering in of a far-right political party, and the overturning of Roe Vs Wade as clear indicators of the rise of fundamentalism. She submitted that given the nature of the kind of fundamentalism we are up against, it is only wise that our strategies against it take on a transnational, cross-movement, and trans-disciplinary nature in order to defeat it. She encouraged us to stand in solidarity with each other, resisting on others’ behalf whenever their human rights are infringed on because in preserving and protecting the liberties of others, we do our own. Our chances of survival and triumph over these forces, Dr. Awino said, depends on how well we learn from the past. This means that we have to engage with the bodies of knowledge of our feminist ancestors to see the strategies that worked and failed and use that knowledge to forge our way forward.

Dr. Okech’s keynote was a primer for the discussions that ensued at various feminist cafes set up on governance, economics, sexual integrity, and bodily autonomy against the background of fundamentalism.

Ugandan Feminist scholar and educator, Sarah Mukasa submitted the need to create an ecosystem that responds to the issues at hand while learning from our past, to not lose sight of the bigger goal of social transformation. Professor Sylvia Tamale, a Ugandan feminist scholar, and educator, in another rousing speech on decolonizing knowledge, implored feminists to engage vigorously with feminist writings and works and to write and document with equal verve so as to keep us flooding the past and our future with light. In support of this point, Dr. Awino Okech emphasised the importance of building and visibilising African feminist knowledge systems by citing African scholars. She called out young feminists’ inclination towards quoting feminist scholars from the west while ignoring African scholars entirely.

On resisting religious fundamentalism, Theology scholar, Professor Mombo Esther shared her thoughts on her work with the Circle of Concerned Theologians, a group of women theologians that dedicate their lives towards amplifying Pan-African and inter-religious theological perspectives of African women.

After days spent in collective reflection on the work to be done towards combating fundamentalism, the convening came to a close. At this point, the four days had cultivated an understanding that within and amongst us, was sufficient courage, resilient bonds, and wisdom to put up a resistance against the forces threatening our liberty. We felt that no matter how hard the fundamentalist gales blew, we would remain unbowed. In the joyous moments of exchanging words of hope and embracing each other goodbye, the words of Nigerian poet, Ijeoma Umebinyuo came to life:
“You call me sister not because you are my blood but because you understand the kind of tragedies we both have endured to come back into loving ourselves again and again.”