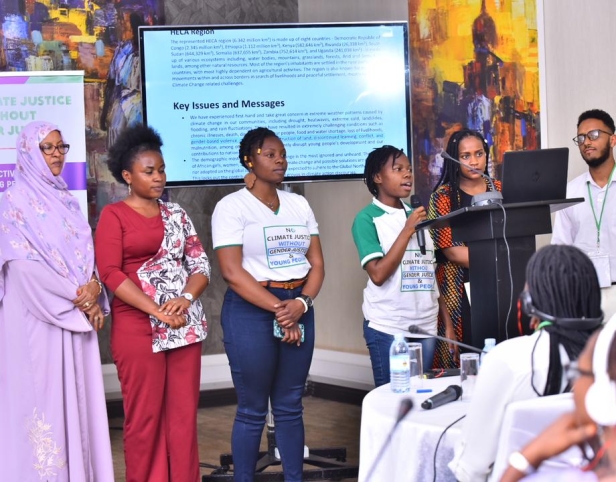 Every other month a disaster of apocalyptic magnitude rocks a corner of our world. When it is not relentless rains burying communities under water, it is a long, drawn-out famine that leaves a trail of shriveling bodies, young and old. There was a time when the climate crisis was spoken of as a distant future thing. Today, news about the climate crisis has become the soundtrack of our present-day life, and living in the thick of it, some of us cannot afford apathy anymore. In Africa, there is deep concern about what kind of future will be inherited by young people in their diversities with this looming crisis. But unfortunately, the track record so far shows that the very people who have much to lose; African women, young people, and poor people in their diversities– have been and are still largely excluded from shaping their future.

As part of AMwA’s COP27 roadmap, together with Oxfam and FEMNET, we co-convened a regional gathering for young women on climate justice and gender justice. From 23 -26 of August 2022, 40 young feminists from the Horn, East, and Central Africa, including Uganda, Kenya, Somalia, Rwanda, South Sudan, Ethiopia, Zambia, and DRC, convened in Kampala to discuss the threats to their interconnected struggles of gender and climate crisis. Three days of stringing their experiences with gender and climate crisis together and developing bold and disruptive strategies to transform their world culminated in a position paper for COP27 that describes their role as young feminists in achieving climate and gender justice. Young feminists unraveled the current situation in South Sudan, where the low-income families most affected by the drought and famine exchange their daughters for bride prices in the form of cows. Also, in Ethiopia, the high prevalence of sexual violence is experienced by young girls and women moving long distances to find water or fuel for home use. In Uganda, activists who grew up in communities built on reclaimed wetlands shared about the incessant floods that forced them to drop out of school from time to time. With these stories, they highlighted the common thread linking gender and the climate crisis in their countries and the oppressive patriarchal, colonial, capitalist, and racist systems whose indefatigable penchant for exploitation of natural and human resources has hollowed out the planet.

By the end of the convention, the young feminist activists had come up with a communique and position paper that illustrated the experiences of African women, girls, and gender-expansive persons in the context of the climate crisis. The communique also provides recommendations and proposed solutions around financing, inclusion, information, and the centering of young African feminists in climate and gender discourse.