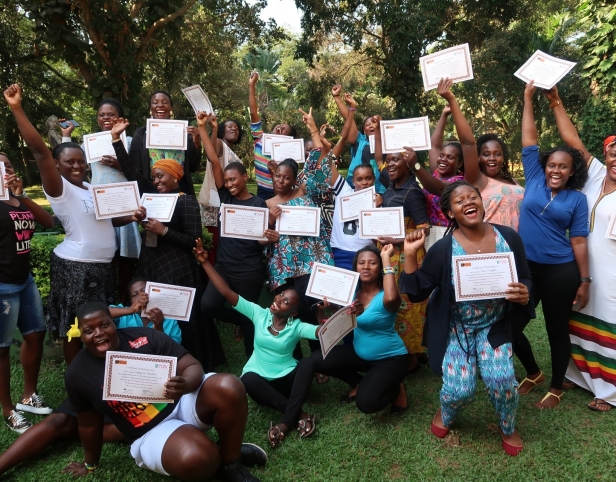 From the Millennium to the Sustainable Development Goals, the need to safeguard the rights and wellbeing of women and girls has become central to all aspects of development politics. The fight against all forms of sexual and gender-based violence has become a leading issue in law courts and communities, while the presence and visibility of women from the arts through to politics, business and media has increased dramatically. Yet with women comprising only 23% of all Parliamentarians in Africa and with only 302 female cabinet ministers in a total of 1,348, more needs to be done to ensure that the concerns of women and girls are articulated at all levels of decision making.

The path to a socially just world and achieving gender equality begins with increased access to and participation of women in decision making spaces to highlight the plight of women and girls and develop strategies for the betterment of our standards of living. Feminists and women’s rights activists have not ceased advocating for improved representation of women at all levels of leadership, in public and private entities.  Today, together with FORWARD UK, Sub-Sahara Advisory Panel in UK and Children’s Dignity Forum Tanzania, we are convening a Women in Leadership Symposium to interrogate the state of women’s leadership in Uganda and reimagine transformational leadership development models that work for women in the 21st century.

We are also here to celebrate the gains made in young women’s leadership over the last decade under our leadership programs: The Tuwezeshe Akina Dada Young Women’s Leadership and Mentorship Programme supported by Comic Relief and the Young Women in Leadership and Mentorship Programme supported by UN Women Uganda. Having strengthened the leadership capabilities of about 75 young women in Uganda and more than 100 outside Uganda, they today demonstrate confidence and ability to influence and shape decisions about their bodily integrity, rights and entitlements including accessing services, ability to seek justice and make informed choices in their lives. The young women are part of a robust network, fighting for the rights and freedoms of women and girls across Africa and the diaspora and have received mentorship from some of the most innovative and influential women leaders. Through their social action projects, the young women leaders have reached out to over 1,500 stakeholders in their communities such as young women, policy makers, opinion leaders, and the general public and also influenced policy at local, national such as at Parliament influencing the Sexual Offences Bill and international level including the Commission on the Status of Women and the European Development Days.

As we take stock of the advantages of developing leadership capacities of young women which build a strong case for women’s uninterrupted participation in leadership, we urge the government of Uganda and relevant stakeholders to strengthen efforts towards fulfilling their commitment to increasing women’s representation and meaningful participation at all levels of decision making in line with the instruments that the country assented to such as the Beijing Platform for Action and the Protocol to the African Charter on Human and Peoples’ Rights on the Rights of Women in Africa.

About Akina Mama wa Afrika (AMwA) is a Feminist Pan-African leadership development organisation that aims to strengthen the individual and collective leadership of African women, forming strategic partnerships, to tackle patriarchy and attain gender equality and women’s empowerment for a just and secure Africa.

TuWezeshe Akina Dada which is part of the Common Ground Initiative (CGI) is funded by Comic Relief, and co-funded by DFID, seeks to strengthen the links between UK-based African Diaspora and women in Africa across the generations using effective and innovative approaches to tackle violence against women and girls; targeting Uganda, Kenya, Tanzania Somaliland, and UK.

Reimagining Leadership in the 21st Century at the Women in Leadership Symposium
Reflecting and strengthening the mentorship component of the TuWezeshe Akina Dada project in Uganda
Tuwezeshe Young Women’s Leadership Conversations: Keeping the Sistahood Alive