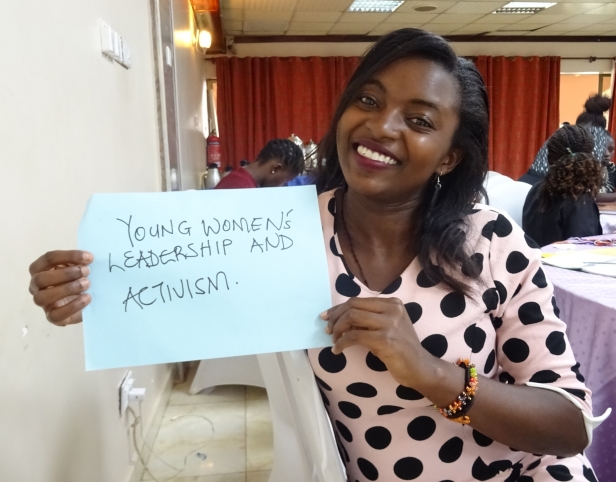 It is in the 21st century that an increase in the number of women occupying leadership positions as a result of the efforts of feminists and women’s rights activists has been recorded. Studies show women’s leadership in the 21st century as more transformational than that of their male colleagues in a context which is still largely male dominated. On 12th February, women leaders from far and near convened to celebrate the gains of advancing women’s leadership in Uganda and reflect on existing models of leadership development that diverse actors have employed. The space created by Akina Mama wa Afrika in partnership with UN Women Uganda and Comic Relief under the TuWezeshe Akina Dada program also sought to generate new energies and strengthen ideas and inspiration to shape the future of women’s leadership development in response to the leadership challenges of this era.

In a panel style conversation, Jacqueline Asiimwe, the CEO at CivSource Africa, set the stage for the day’s deliberations by guiding a discussion on Good Practices in Leadership Development from the perspective of various leadership development institutions. These included FORWARD UK, MEMPROW Uganda, FES Uganda and Akili Dada which were represented by Naana Otoo-Oyortey, Sarah Nakame, Maria Alesi, and Kate Kiama respectively. While FES Uganda focuses on involving young women who are socially active and politically interested by guiding them to articulate themselves properly in various spaces, similarly, the core elements of the TuWezeshe model of leadership are power to, with and within, self-care and the peer network. Sarah shared her experience nurturing young women’s activism in schools emphasizing the importance of drawing on our experiences as women to inspire and encourage mindset change. This was strengthened by Akili Dada’s reflections on exercising feminist mentorship to inspire and guide young women in their leadership journeys.

Miria Matembe, a pioneering female politician in Uganda together with Phoebe Namulindwa, the RDC of Luweero district and an alumna of our African Women’s Leadership Institute (AWLI) were joined by Rebecca Karagwa and Nura Ali, both Tuwezeshe fellows in a panel discussion where they each shared their experiences advancing women’s rights in their communities and countries. The conversation was facilitated by Celine Baragwiha highlighted the need for intergenerational perspectives when assessing women’s leadership development. Dr Miria emphasised that leadership is about service to the people and that when a leader makes their cause a people’s cause, they will be joined by the masses. Rebecca urged young women to be goal oriented and stand up for the goals no matter what. Taking us to Somaliland, Nura Ali narrated the numerous challenges women face in realising their rights that are entrenched in strong patriarchal notions such as that women’s leadership is a Western idea.

The biggest challenge I have found is when men ask how being a young woman, I am able to lead – Phoebe Namulindwa

Participants then broke out into sessions which addressed current, cross-cutting issues and concerns affecting women in different contexts. Talking about young women’s leadership and activism, Patricia Humura, a Tuwezeshe fellow, and Annet Birungi, UN Women Uganda fellow actively engaged the participants in a discussion about good practices and strategies that will strengthen their capacities to generate change. Doris Mugambi from Akili Dada moderated a conversation on transforming young women’s leadership through entrepreneurship development which brought together professionals from different backgrounds that advised young women present on how to build sustainable projects that enhance economic liberation of women. Tackling burn-out and mental wellbeing was addressed by Phoebe Murungi and Misha Matovu Camarra who invited participants to share their experiences and provided participants with a number of tips on practising mental wellbeing in daily life. Last but not least, different forms of sexual violence and sextortion were discussed led by Shira Natendo, Fionah Komusana, Nura Ali and Naima Isa Sebbi – all alumnae of the African Women’s Leadership Institute. This conversation allowed participants to understand sexual harassment and its manifestation. Participants also shared personal experiences, which encouraged collective, in-depth reflections, and how to address these.

The symposium came to a close with a commitment from partners to continue supporting the development of young women’s leadership as well as the building of a strong and sustained movement that will relentlessly push for the betterment of the lives of women and girls on the continent.

Reimagining Leadership in the 21st Century
Tuwezeshe Young Women’s Leadership Conversations: Keeping the Sistahood Alive
Building a Movement of Young Women Equipped To Respond To Limited Participation of Women in Leadership and Decision-Making