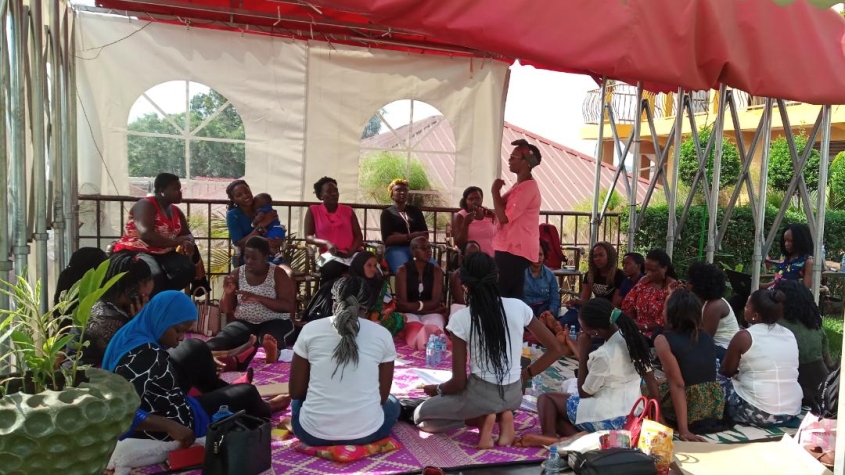 It is through mentorship that the Feminist movement in Africa and beyond will be sustained and strengthened. Mentorship is the oil that keeps the wheels of young women leaders moving ensuring that they have solid foundations to develop as capable and effective leaders. In a world where women leaders must work twice as hard as their male counterparts, it is through mentorship that they can be further equipped to participate effectively in governance and influence decision making processes.

Akina Mama wa Afrika (AMwA) under the auspices of the Tuwezeshe Akina Dada project which seeks to build young women’s capacity to tackle Gender Based Violence held a mentorship retreat for her mentors and mentees on 25th January 2019. By bringing together fellows, mentors and young women advisors of the TuWezeshe project, AMwA sought to reflect on and strengthen the mentorship component of the TuWezeshe project. In her opening remarks, Leah Eryenyu, our Research, Advocacy and Movement Building Manager, emphasized that the meeting aimed to build individual leadership abilities of the young women, create a stronger bond among the TuWezeshe mentors, fellows and YWAP, assess the state of the mentorship program and strategize on the way forward. It was a space for the younger women to connect with the older, trailblazing women in the Uganda women’s movement and cultivate meaningful relationships with one other to be able to transform and navigate their lives and communities.

To enable participants appreciate the role of mentorship in leadership while reflecting on their individual growth, the event was largely interactive with participants exposed to a number of practical tools such as videos and exercises. The team watched a video on the power of mentorship from which they drew lessons on how to better their relationships. The video reinforced the fact that in order for a mentor to unleash their mentee’s full capacity, the mentorship must be intentional from the start and went ahead to differentiate mentors from role models emphasizing that mentors usually walk the journey with their mentees.

From the video, I am challenged to pass the valuable mentorship that I have received on to other young women and girls. It is not enough to receive it, I must pass it on! – Patricia Humura, TuWezeshe 2017 fellow

Discovering the various aspects of life we share with people in our circles usually deepens our relationships with one another. In order for mentors and mentees to get to know each other better, they took part in an exercise where they identified similarities and differences, ranging from details as minute as singing in the bathroom to traveling to the same destinations. Some realised that they shared aspirations with one another and would build on these to strengthen their bonds while others appreciated that there is more to the mentorship relationship than just emails. To further understand why each person acts the way they do, participants carried out a temperaments exercise code named ‘Are you a lion or a peacock?’ which revealed the different personalities of the team.

Examples of mentorship relationships that have worked were celebrated. The mentors and mentees present shared lessons learned along the way and the various steps they have taken to build their relationships such as being focussed and committed to the mentorship, the boldness to share their vulnerabilities and harnessing the power of social media to connect better. Among the impediments to the mentorship program are the fact that there are general lapses in communication between mentors and mentees, the busy schedules of the concerned parties, the unwillingness of mentees to learn and unlearn, long distances between participants that inhibit physical meeting. For a formal mentorship program, mentors advised that a proper orientation into the mentorship program must be carried out at the beginning of the journey.

Participants concluded by developing action plans that will enable them achieve their individual and mentorship goals. Using the ‘Wheel of Life’ tool, they assessed their stand in life in the different aspects of Family, Faith, Fun, Firm, Finances, Fitness, and Friends and developed plans to better balance the 7Fs of life. Sisters committed to supporting one another realize their dreams of self-care, financial growth among others and hold each other accountable.