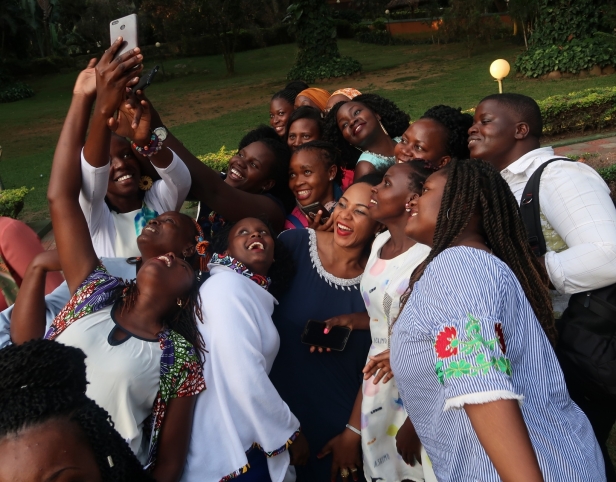 “What does it mean to be an effective feminist leader?” This was one of the questions asked and answered many times over at the TuWezeshe young women’s leadership retreat hosted by Akina Mama wa Afrika on behalf of the TuWezeshe Akina Dada Africa-UK Young Women’s Leadership and Empowerment Movement in partnership with the Foundation for Women’s Health Research and Development, Sub-Sahara Advisory Panel and Children’s Dignity Forum supported by Comic Relief. The mentorship and leadership strengthening retreat held on 11th February took the form of plenary discussions and workshops aimed at enhancing the leadership capacities of young women to be able to influence and shape discourse in the feminist movement, as a sisterhood.

…we became a movement”

The retreat had three major objectives – first to share learning from the 4 year young women’s leadership journeys and to create a safe space for networking and reflection on conversations about young women’s leadership. The retreat also sought to provide the Tuwezeshe fellows with an opportunity to explore emerging issues and strategize on how to sustain their movement. Fellows present were from Uganda, Tanzania, Somaliland and the UK. Naana Otoo-Oyortey, the Executive Director at FORWARD welcomed the participants enthusiastically. She noted that the most important part of her work was training young women to become leaders through availing and providing mentorship opportunities for them.

Participants then responded to questions exploring their leadership journeys, sharing highlights, challenges and the lessons they learned along the way. Nura Salad, a Tuwezeshe Fellow from Somaliland named tradition as a challenge they face in their work noting that they face difficulties with the older generation trying to silence the younger generation especially young girls and urging them to remain silent. This, she reported, has not deterred them. In fact, due to their work raising awareness and educating young girls on social justice issues, they are now known as the “tuwezeshe girls.”

“The project enhanced my confidence along with knowing my strengths, opportunities, weaknesses and threats.”

“I learned better communication skills, especially on how to be outspoken and unapologetic”

Panel discussions on the participant’s social action plans delved into topics like policy on sexual violence and sexual harassment in schools and higher institutions of learning. AMwA’s young women leaders under the TuWezeshe Movement discussed their meeting with the parliamentary select committee investigating sexual harassment at institutions of learning in Uganda, an opportunity which they used to push for the passing of the Sexual Offences Bill. On a panel analyzing mentorship experiences, Elliot Orizaarwa, an AWLI mentor and Executive Director of Women and Girl Child Development Association (WEGCDA), emphasized the usefulness of mentorship for young leaders and the need for these relationships to be nurtured. Kate Kiama, Programs Manager at Akili Dada, went ahead to define feminist mentorship as a process that builds empowering reciprocal relationships of solidarity, mutual learning and support; that enables the advancement of the larger goals of feminist social transformation in our own lives, in our work, and in our social contexts.

“Challenged me to be better, inspired by peers and networks”

“Taught me to pay attention to inclusion and diversity”

“Taught me how to motivate others”

This space was created to enable both implementing partners and the fellows to take a step back, evaluate their progress so far and strategize on ways in which they can improve their reach and impact and it did just that. The day ended with a re-commitment and renewed energy dedicated to the cause of women’s leadership. The critical mass of young women brought together under the Tuwezeshe fellowship pledged to continue tackling issues affecting women and girls through their various social action projects using strategies like digital advocacy, conversations, poetry and other creative outlets.

Reflecting and strengthening the mentorship component of the TuWezeshe Akina Dada project in Uganda
Amplifying the Actions of Young African Women in Their Fight against All Forms of Gender-Based Violence
Tuwezeshe Akina Dada:Revolutionizing Young Women’s Leadership to Combat Gender Based Violence