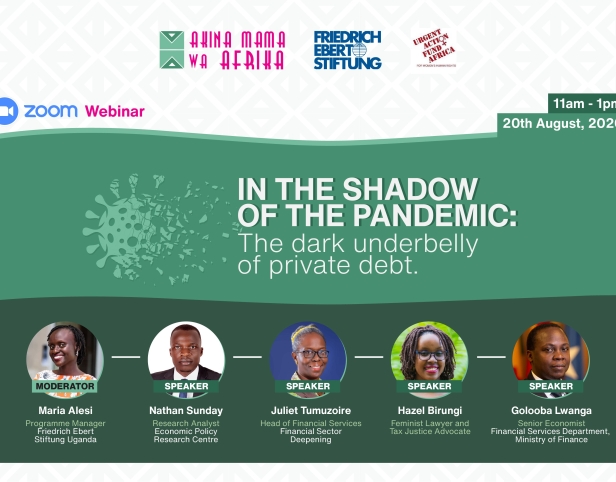 People borrow money for a myriad of reasons; to get an education, manage medical or financial emergencies, travel, pay existing loans, start a business  or expand it. Debt is one of the ways people cope but more so now, during the Covid-19 pandemic which has ushered in a major ongoing global economic crisis and caused a recession in most nations.

We held a webinar themed, “In the shadow of the pandemic: The dark underbelly of private debt”, to delve into the problem of debt in Uganda, exploring feasible solutions to achieve solvency.

The webinar hosted jointly with the Friedrich Ebert Stiftung-Uganda and Urgent Action Fund- Africa, on 20th August, analysed how the debt problem in Uganda has been exacerbated by the pandemic and policy measures, and the implications this has on the wider national goals and objectives.

He added that gender, age and regional differences are apparent in the statistics with women  having lower incomes than men, despite borrowing from the same institutions, at the same rates. “This is a disadvantage to women because they have lower incomes on average than men yet they borrow from the same institutions as them and at the same terms. The interest payments therefore consume a bigger percentage for women than men,” he said.

Elaborating further on gendered household debt, Hazel Birungi, a lawyer and tax justice advocate noted that women suffer from long term debt problems to a greater extent than men. 61% Ugandans getting into debt to purchase everyday necessities are women because as caregivers, they are in charge of domestic affairs.

She mentioned that commercial banks are rarely an option for women to get loans because they do not trust women. As such, women opt to borrow from Village Savings and Loans Associations (VSLAs), friends, family and digital lenders who not only advertise aggressively; but are also a quick and accessible option with the possibility of acquiring more debt in real time.

However, despite the convenience of these options in terms of documentation, collateral requirements and transaction costs, it is to the disadvantage of women as they tend to be more expensive in the long run. This was exacerbated by the lockdown and consequent closure of businesses which forced women to borrow more to stay afloat.

In addition, people who relied on daily incomes were heavily compromised. This situation could worsen knowing that about 2-3% of the working population has lost 100% of their income. Challenges of this nature have reduced people’s ability to pay loans and interest.

The challenge of borrowing coupled with the inability to pay the loans and interest is worsened by the abusive lending practices individuals are subjected to at the pre and post purchase point of the loan process, as revealed by Juliet Tumuzoire, the head of financial services at Financial Sector Deepening.

“Borrowers are often not aware that interest rates and price changes over the loan period.  Under internet lending for instance, there is uncertainty about the total cost of credit, access fees and the rights of the borrower,” she said.

However, when credit is well administered, it becomes a driver of economic growth and development. As such, there is a need to build and maintain confidence in the financial sector through clear regulations on consumer protection and changes in the economic business environment.  Players in the financial ecosystem must advocate for and enable policy reforms to accommodate innovation to keep up with consumer changes, promote client grievance and recourse mechanisms, as well as improve borrower awareness of financial services options. Harmonizing consumer protection policies and guidelines, and clarifying messaging standards especially for digital interfaces would also go a long way in combating abusive lending practices.

Tackling the “Shadow Pandemic” of Domestic Violence During COVID-19
COVID-19 Chronicles: Life in the clutches of a global pandemic
The Informal Economy in the grip of the pandemic: Sharing experiences and strategies for a resilient recovery