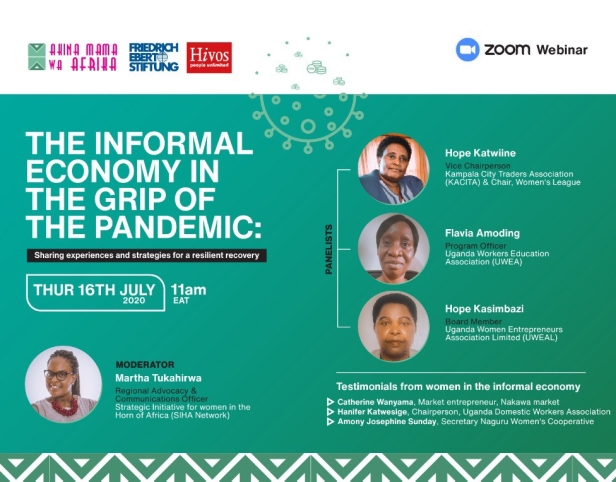 Over 50% of Uganda’s GDP is attributed to the informal sector and more than 80% of the labor force work is in the informal sector according to the Uganda Bureau of Statistics (UBOS,2014). A report by the International Labour Organisation (ILO) stated that women-owned businesses by 2014 had outpaced male-owned businesses by 1.5 times (236% compared to 153 %.). According to the report, though women own 44% of the businesses, they are mainly engaged in self-employment (86.2% of working women).

However, what the statistics do not show is that most of the informal businesses owned by women entrepreneurs in Uganda are neither registered, regulated, insured nor do they have an address or business plan. Most of these businesses operate with no definite source of funding, booking keeping or accounts. They run on money borrowed from relatives, friends. In addition, the women who run these businesses survive on hand to mouth because these businesses generate daily incomes.

These were amongst the most affected businesses by the lockdown which led to the closure of business all across the country.

To interrogate the impact of Covid-19 on the informal sector, we convened a webinar on July 16, 2020, with key stakeholders in this sector in partnership with Friedrich-Ebert-Stiftung Uganda (FES Uganda) and Hivos. We also explored possible remedies and mechanisms that can be adopted by state and non-state actors for a resilient recovery from the impact of the Covid-19 pandemic.

The women shared their lived experiences in the different fields of entrepreneurship, domestic work, trade and vending. Kasimbizi in her remarks noted most of the affected women entrepreneurs are single mothers who despite their meager resources are expected to shoulder the burden of reproductive care while also assuming  productive roles at work.

The story was not so different for domestic workers who decried an increase in the amount of work due to the lockdown yet they continue to earn peanuts. In addition to being mistreated, some domestic workers are not paid due to their bosses suffering pay cuts or being laid off.

Sande from the women vendor’s co-operative shared that the prohibition of street vendors from trading left them without an income to fend for themselves and their families. She noted that this increased cases of domestic violence as most street vendors are married to boda boda men (motorcycle taxis common in Uganda), who were also rendered unemployed due to the lockdown and restriction on movement of motor vehicles.

“Domestic violence has become too too high because most of our husbands are at home. If you ask for money for food, you end up quarrelling with your husband because he is not working and doesn’t have money,” she said.

However, unlike street vendors, women in the market were permitted to work during the lockdown, on condition that they stayed in the market. However, Catherine Wanyama, a vendor at Nakawa Market in Kampala decried the deplorable and unsafe state in which they worked.

“When it rained, we had to sleep in a hotel room with a group of other people or take shelter in an unfinished building. There were no bathrooms available so we had to bathe in the toilets,” she said. In addition, Catherine says women suffered losses from damaged goods due to the reduction in the numbers of customers and the rising use of middle men who purchased directly from farmers.

Similarly, Betty Lunkuse, the Home-Based Workers’ Chairperson said their financial vulnerability increased during the lockdown as money lenders increased interest rates yet the burden of rent and debt repayment was not eased by the government.“Money lenders are charging an interest of up to 28% on a loan of UGX 250,000 shillings yet we are not making money during this period,” she said.

However, not all was gloom. Hope Katwiine, vice Chairperson of the Kampala City Traders Association noted the positive impact the pandemic has had on some women. “Some workers have made money through making masks and sanitizers. The lockdown has also changed the mindset of traders to consider online trading and other forms of income generating activities like farming,” she said.

She called upon the Government to intervene and reduce the interest rates by commercial banks as well as enforce loan rescheduling. Speaking on behalf of the traders, she also called upon the Uganda Revenue Authority (URA) and the Kampala Capital City Authority (KCCA) to desist from high-handed methods of enforcing compliance.

The African Women’s Leadership Institute has shaped me into a resilient woman
COVID-19 Chronicles: Life in the clutches of a global pandemic
Tackling the “Shadow Pandemic” of Domestic Violence During COVID-19