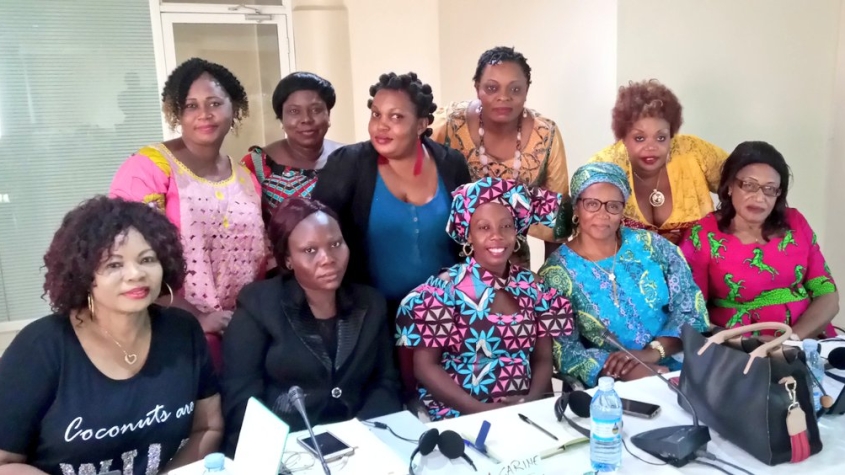 Despite the progress made in Africa towards increasing awareness of women’s human rights, there is still a gap in some countries. With the persistent abuse of women’s rights in the Central African Republic, Feminist and transformative leadership is a strategy in evolving change from unfair laws, discriminatory systems in socio-economic arenas which have taken over the political space. As we strive to dismantle patriarchy, establishing active actors in different countries will lead to a bold and transformative movement of women that advocates for the demystifying of Sexual and Gender Based Violence. With support from Amplify Change, Akina Mama wa Afrika conducted a Training of Trainers workshop in Kampala, Uganda for ten women to accelerate the implementation of the Kampala declaration in ending impunity in CAR.  The training brought together women from the civil society organisations, political sphere, government, legal sector, and business among others. At the end of the training, the participants identified as active allies who will continuously engage women in areas affected by war in order to have women lead in peace and security.

Eunice Musiime, the Executive Director of Akina Mama wa Afrika (AMwA) set the scene by welcoming participants to Uganda and gave them an overview of AMwA and the work she does striving to contribute to the full equality of all African women by strengthening their individual and collective leadership and by forming strategic partnerships to tackle patriarchy and promote a just and secure Africa. In her keynote address on the state of peace and security, Ms. Claire Hawkins, Women Peace and Security specialist at UN Women described how UN Women has supported countries in conflict including Central African Republic. She highlighted that UN Women supports women’s full and equal representation and participation in all levels of peace processes and security efforts.

To enable participants gain a deeper understanding of women’s human rights, Ms. Francoise Mukuku a lawyer and human rights activist from Kinshasa, Democratic Republic of Congo took participants through the legal and policy framework on women rights. She stressed that women’s human rights frameworks provide a lens that allows us to look at the problems that women face every day. She also explained some of the regional, national and international laws that provide for the rights of women. Dr. Sylvia Tamale a professor of law at Makerere University expounded on feminist theory where she urged women leaders to always learn, unlearn and re-learn their ‘truths’ although it is a challenging process . She noted that we tend to forget and think that our truths are the alpha and omega not knowing that as feminists we must be conscious regarding everything. Dr. Sylvia urged all trainees to be critical thinkers, put feminist lenses to everything and always diagnose situations to do with women because no one can help women without knowing why they are marginalized.

Most women’s knowledge and contribution is culturally marginalized and treated as an anecdotal, women are regarded as people who cannot know or do anything about life around them and that is why we need herstory rather than history. – Dr. Sylvia Tamale

In training participants on Feminist and Transformative Leadership, Ms. Eunice Musiime, urged all participants to carry out personal tests as leaders. The tests sought to differentiate a leader from a manager where a leader shapes culture, sets direction, breaks rules, uses conflicts and takes risks while a manager enacts culture, plans details, makes rules, avoids conflicts and minimizes risks. She noted that leadership is having the capacity or ability to lead and influence a group and went ahead to explain the five levels of leadership namely; position, permission, production, people development and pinnacle.

Helena Okiring, a human rights activist, trained on movement building where she noted that movements are important because there is much people can do in a collective. She urged trainees to focus more on the root issues because all that a movement needs to be successful is 3.5% of the population.

Movement organizers are very particular about which battles they choose and they deal with tackling the root causes of problems. – Helena Okiring

She took participants through different exercises of collective organizing as a means to take action.  They explored movement-building and its modalities as a means for creating change.  Movement building is ultimately about creating bottom-up change – driven, directed and nurtured by those most affected by particular issues. They also explored concepts of solidarity, networks and partnerships – and looked at how this can feed into movement building activities.

I have seen light. Today, NGOs are formed and their power is not streamlined because they do not work together. They fight and get divided by their different egos; they cannot get women into participation. Through collective efforts, NGOs can lead better – Participant

Hope Chigudu, a Feminist activist with decades of experience in feminist movement building and feminist leadership development trained on personal mastery in regards to how participants can situate, know and develop themselves. She explained the different chakras and noted that if humans were not energy then they would not eat or communicate. She further noted that being grounded means one can do anything and any human being that is not grounded or rooted dries up. According to Hope, being rooted is the beginning of happiness and personal mastery and in order for it to happen one must have self-awareness.

Catalysing a Movement of Young Feminist Leaders in Uganda
Re-orienting and strengthening the journey of feminist and transformational leadership at the African Women’s Leadership Institute
AMwAzons Meet Select Committee On Inquiry into Allegations of Sexual Violence in Institutions of Learning in Uganda, Submit Recommendations For Institutions of Higher Learning