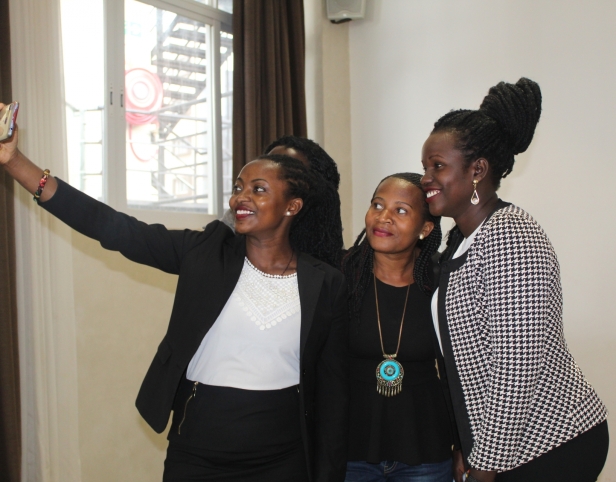 The path to a socially just world and achieving gender equality begins with putting an end to sexual violence and prioritizing women’s health, right and wellbeing.  Young people’s empowerment has for long formed a foundation of any social change or movement. The TuWezeshe fellowship is a growing movement against SGBV and as with all growing movements, must be strengthened. On 20th November, young women leaders under the Tuwezeshe Akinda Dada fellowship were brought together by AMwA supported by FORWARD UK and the Children’s Dignity Forum Tanzania to have their leadership and advocacy skills enhanced to be able to effect greater change in their lives and communities, in addition to the change they are already creating.

In her opening remarks, our Executive Director, Eunice Musiime encouraged the TuWezeshe fellows to be accountable and build credible brands. She further urged the fellows to work together noting that for one to grow, they must move along and partner with like minds. She then guided participants in a check-in session where the participants explored the different aspects of the fellowship they appreciated and what they thought could have been done better. The fellows, who attended AMwA’s leadership trainings in 2017 and 2018 respectively, then went ahead to share about their community action initiatives – where they were supported to reach out to their communities. The projects ranged from creating clubs at village and university level to training journalists on gender sensitive reporting, to mention but a few. The strategies employed included the use of creative arts, research and dialogues to amplify women’s and girls’ concerns.  Altogether, the fellows reached a total of about 1,500 stakeholders in Uganda.

Participants were then guided through sessions on safeguarding and effective advocacy where they were encouraged to develop personal and organisational safeguarding policies and develop advocacy strategies respectively.  They learned that effective advocacy involves influence of public policy, laws and budgets by using evidential facts to create the change the community wants to see. It involves building relationships through networks and collaborating, with different stakeholder and with the community, creating clear and concise messages, knowing and understanding factual information in different spaces.  They shared some of their personal experiences influencing different spaces. Gloria Mutyaba, a 2017 fellow noted that she had influenced global advocacy at the Coalition for Lesbian Women to open the space up to include more African women. Similarly, Patricia Humura shared about how she influenced global advocacy at the AIDS 2018 Conference to ensure that more youth from African countries are included in future conferences. Participants were also led in a session where their report writing and monitoring and evaluation skills were strengthened.