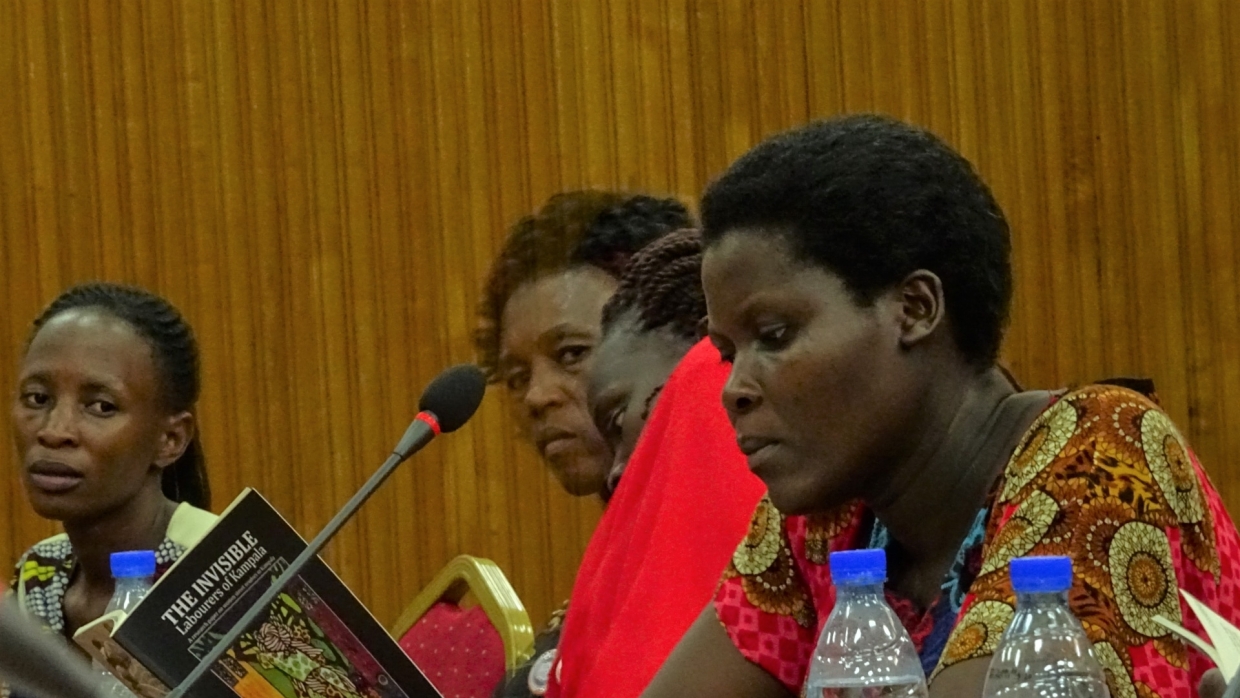 ‘As human beings, there’s a respect that we deserve because all of us have our rights. Even when we are on the streets, everyone must respect us. Something that does not happen most of the time…’

A woman vendor from Naguru market

Nothing less than my interaction with the Parliament has inaugurated my journey into the women’s rights movement of Uganda. My curiosity could not grow bigger as Beckie, one of the AMwA sisters, and I walked down the corridors of the official buildings. Akina Mama wa Afrika had been invited to the Public Forum Meeting organised by SIHA Network, which gathered women street vendors, the Uganda Women’s Parliamentary Forum (UWOPA), and civil society organisations.

Fifteen women from the neighbourhoods of Naguru, Wandegeya, and Kawempe of Kampala took the lead at the meeting. Seemingly calm on the outwards, they took a step forward to speak up about their daily experiences of insecurity, sexual harassment and marginalisation. All dressed in different clothes, shapes, and colours, they represented a community of women who, despite constituting an integral part of the national economy, still live in its shadows. Their stories of violence and humiliation became true in front of my eyes; stories that my mzungu eyes had failed to see and recognise. At the end of the meeting, one of them came to say goodbye and told me, ‘In Parliament! I cannot believe I am here today talking to these politicians when no one in my life has addressed me with any single word other than for bargaining my already-low prices…’.

Their stories took us to the streets, to their houses where fear invades them upon the possibility of another episode of violence, taking them back to the pain of memories. Another consumer, another police officer, could enter their room again. They also shared with us the fear of being dragged to the cold floors of prison for a crime they are not committing. Particularly interesting to me was the image of some Parliamentarians only being able to reply and empathise with these women through their role of mothers: mothers who deserve a better situation for the sake of their children.

‘In Parliament! I cannot believe I am here today talking to these politicians when no one in my life has addressed me with any single word other than for bargaining my already-low prices…’.

As the meeting went on, their expressed suffering was gradually transformed into anger and determination. A determination that had already been bubbling up, bringing their voices back to break the silence. They shared with us the initiatives they are already undertaking towards the building of a collective action, which especially makes use of social media as a tool for expression and empowerment at the individual and collective level.

That day these women stood up and spoke up for all their fellow female vendors who work day and night on the streets to feed the country and provide for their families. I dare to say that the share of their personal and collective realities has been an eye-opener for many of us. In their endeavour for protection, rights, and respect, these women taught me a lesson of bravery and perseverance. And so, the walls of Parliament witnessed that day how the women on the street markets of Kampala stopped being invisible.

Accountability in the #MeToo Movement; Fighting Sexual Violence at the Workplace in Uganda
Blossoming Women’s Leadership for Decent Work in the Horticultural Sector in Uganda
Clipping Thorny Rose Bushes: Stories of Women Working on Flower Farms in Uganda