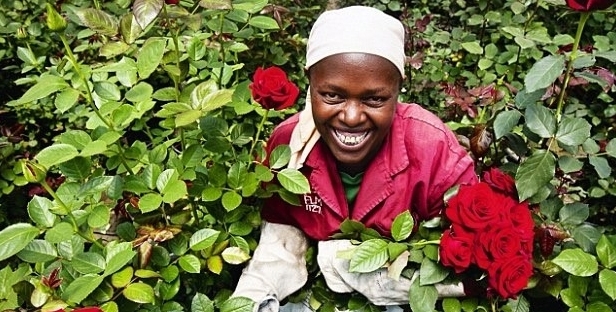 In 2014, flowers contributed 38.7 million US dollars to Uganda’s GDP. Although women contribute 60% to 75% of the labor force in the horticulture industry, their labour is mainly concentrated in the lower stages of the value chain. Women work as labourers – digging, weeding, harvesting, sorting, packing and labeling flowers. Despite women being favoured over men in picking and sorting of flowers because of their soft touch, their value does not translate into commensurate pay or protections and benefits, nor does it put them on a path to leadership. The documentation of women’s lived experiences is crucial to identifying institutionalized injustices and collectively working to dismantle them. Akina Mama wa Afrika shares the oral herstories of three women working on flower farms, documenting their everyday lives, achievements, dreams and aspirations.

Joyous and spirited, Rebecca Acayo, Fatuma Nakimuli and Specioza Aude come from three different flower farms in Uganda. Aged 24, 27 and 50 respectively, their experiences on these flower farms are similar characterized by low and unequal pay, gendered roles and the desire to become self-employed. All single mothers who are independently raising their families, Rebecca and Specioza are supervisors at their farms while Fatuma was recently promoted to a grafter after being a harvester, a role she is proud of taking up. A week in their lives involves daily care work since the burden of looking after their homes rests on them, 11 hour days at work – 12 during peak seasons such as Valentine’s, Christmas and Mother’s Days with only one day off, a position that results in them leaving their children under the care of their relations, particularly Rebecca and Fatuma.

Their smiles fade when they talk about the challenges and limitations they face at the workplace. While the women workers appreciate that they earn a salary which has enabled them pay their bills such as education costs, the amount received does not translate into a living wage leaving them unable to save and spend beyond their basic needs. Their workplaces are largely influenced by patriarchal norms where even with a desire to occupy leadership roles, they are often relegated to gendered roles. Fatuma expresses her distress as to being unable to work in the spraying department, which she ably could and which earn her a higher pay, because she is a woman.

I have been in the same position for 11 years unable to receive a promotion because I am not well-qualified. I am only educated to Primary Six level – Specioza who despite this, revels in her ability to teach others on her farm, who have gone on to excel, narrates.

There is a twinkle in their eyes, a glimmer of hope, when they talk about their dreams. Aspirations of self-employment in real estate and agriculture in the near future. For now, theirs is a unanimous demand for a salary increment.

Akina Mama wa Afrika contributes to the Women@Work Campaign, a global initiative by Hivos that advocates for decent work for women, through the women’s leadership project where we seek to address both structural and practical needs that hinder women’s ascension to positions of leadership.