For every 100 people you meet in Uganda, only 8 have medical insurance. A walk further down the street will reveal that more women have verbal employment agreements than men. This simply means that for many Ugandans, particularly women and girls most of whom are in the informal sector, social protection is still out of reach. Under the auspices of the Women@Work Campaign with support from Hivos, in partnership with Friedrich Ebert-Stiftung (FES) Uganda, we convened a policy forum targeting relevant government ministries, policy makers, workers from both the informal sector, Trade Unions and other stakeholders for a dialogue designed to propose remedies for protection of workers. We sought to accelerate the enactment and implementation of existing social protection policies for women in formal and informal employment for gender equality and equity.

While both women and men face a number of risks and are entitled to social protection, women face multiple and intersecting forms of oppression which intensifies the risks they face. Because of patriarchal dictates, women are seen as caregivers, relegated to performing unpaid domestic duties which prevent them from securing their own income, making them susceptible to shocks. Given that Uganda’s major social protection systems are contributory and mainly accessed through paid formal employment, women have less access to them given their low labour force participation. Juggling work with women’s maternal functions, during and immediately after childbirth, without maternity and childcare benefits effectively ejects women from the workforce. The conversation on social protections is important to ensure that women are protected as they face a higher risk of falling into poverty. Because the promotion and protection of workers’ rights is of utmost importance in creating a robust and productive economy contributing to a country’s national development, their welfare should be paramount in the planning process. 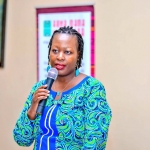 Notably, the conversation on the gaps in social protection cannot be had without linking it to neo-liberal capitalist ideology that looks to cut corners and maximise profits, at the expense of workers’ welfare. To enable participants understand the current landscape on social protection policies and practices for women workers in Uganda, Dr. Madina Guloba, a research fellow with the Economic Policy Research Centre at Makerere University presented a paper on the Gender disparities in social protection in Uganda. She noted that one of the barriers women face in accessing social protection is their high participation in unpaid care work, including a lack of awareness that social protection is a right. A panel also was hosted to share results-oriented approaches, strategies and identify areas that require enhanced commitments. On the panel were Mr. Stephen Kasaija from the Ministry of Gender; Hon. Flavia Kabahenda, a member of Uganda Parliamentary Forum on Social Protection; Ms. Rebecca Ssanyu from the Uganda Social Protection Platform & Ms. Janepher Nassali, the General Secretary of UHISPAWU, a trade union for workers in the horticulture sector in Uganda. The panel discussion revolved around building alliances and strengthening partnerships for action in support of social protection policies and practices. 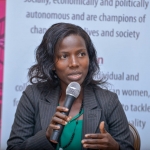 UHISPAWU is creating awareness among flower farm workers on social protection programs so that they can demand for the services. We have established structures that help workers in the horticultural sector in addressing issues of SGBV and any other Human Rights Violations. However, the Ministry of Gender needs to carry out regular inspections so that they understand issues that affect people in the horticultural sector especially to do with terrible working conditions – Janepher Nasali

Hon. Flavia revealed that resourcing for social protection is limited as the Ministry of Finance largely looks at schemes as having no returns on investment. She further noted that there is need to consider checks and balances to compel sectors to comply with social protection mechanisms, in the same way the Gender and Equity Compliance certificate is now required of MDAs to have their budgets approved. Another key recommendation suggested was for the government to provide favourable schemes that suit women both in formal and informal sector. The forum served as a platform to harvest recommendations to influence the 63rd Commission on the Status of Women.

To better influence the CSW process, AMwA also participated in the pre-CSW process at the Africa CSW63 Ministerial Consultation held in Cairo from the 3rd to the 6th of February.  The main purpose of the consultation was to discuss and agree on an Africa Common Position for CSW63, which all Member States can use to inform their statements and negotiations for the Agreed Conclusions in New York.  The convening came up with a number of recommendations to feed into the CSW 63 outcome document. Some of the recommendations made here included to strengthen the policy legal and institutional environment on social protection reiterating that there should be a guarantee that all social protection systems are rights based and are in line with international and regional human rights frameworks.

Statement: International Women’s Day 2019
The Beijing Dispatch: Call for articles on progress in achievement of women’s rights and gender equality as the Beijing Platform for Action Turns 25 – Deadline Extended
Cultivating a Culture of Discourse; Inclusivity and Equality as a Generational Mandate
Click To Comment