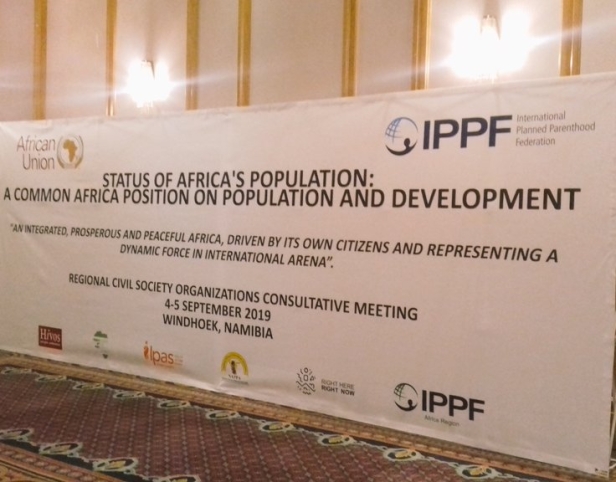 In July 2012, the African Union Summit mandated the African Union Commission to identify Africa’s priorities for the post-2015 Development Agenda in close consultation with Member Stated and Regional Economic Communities. Later in May 2013, the African Union Summit further established a High-Level Committee of Heads of State and Government to sensitize and coordinate the activities of African leaders and build regional and inter-continental alliances on the Common African Position (CAP) on the post-2015 Development Agenda to promote and defend African common positions on issues of interest to the continent and its peoples. This would pave the way for the continent to cement its stance in global platforms.

The consultations aimed at beefing up the upcoming African Union led CAP ensuring that CSOs voices are incorporated in the main document as well as interrogate synergies and complementarities with the existing SRHR and population and development policy instruments such as the Addis Ababa Declaration on Population and Development (AADPD) and Agenda 2063. The meeting sought to identify contentious population related issues and concerns in Africa with solutions and recommendations and to identify civil society’s role in the implementation of the CAP.

Participants were introduced to the CAP by Dr Margaret Agama-Anyetei, the Head of Health, Nutrition and Population Division, Social Affairs Department, at the African Union Commission and thereafter reflected on the existing Population and Development related policies in Africa specifically the AADPD and the Maputo Plan of Action (MPoA). Notably, Bob Munyati from Accountability International provided a comparative analysis of the MPoA (2007 -2015) and the MPoA (2016 – 2030) highlighting the improvements in the 2016-2030 document. However, he noted that issues affecting key populations remain overlooked even in the latest plan of action as they were before. He recommended that to better monitor the implementation of the MPoA among African countries, there is need for improved data collection mechanisms, active participation of civil society in important spaces in order to more emphatically push the agenda as well as improved shadow reporting to further hold governments accountable.

One of the challenges facing the effective implementation of the MPoA is that while the points of contact for the ratification of the Maputo protocol were ministers of gender most of whom were women, the points of contact for the MPoA are ministers of health who are mostly men unfamiliar with the advancement of women’s and girls’ sexual and reproductive health rights.

In two break-out sessions, participants interrogated the population issues at country, regional and continental level as well as the challenges and divergent views and approaches to addressing population issues at these levels. Some of the population issues and challenges raised were gender-inequality, HIV/AIDS, Xenophobia in light of the recent events in South Africa, unemployment, inter-generational gaps, lack of access to information and governance issues including war and conflict to mention but a few. Findings from the CSO online survey on population and development were shared and validated. According to the survey, the main issues of concern to Africa’s population are climate change, gender inequality, unemployment, an aging population and issues of migration and mobility.

National, regional and continental population and development priorities were identified and recommended to the AU for inclusion in the final CAP document. These were identified in four groups and included: maternal mortality, unmet need for family planning and SRH services, human trafficking, poor quality of education, climate change, gender inequality e.g. women’s participation in leadership and decision-making spaces, HIV/AIDS and unemployment. There was a general consensus in the room that there would not be a Common African Position if issues affecting key populations were not taken into consideration. A 12-month roadmap was developed to hold the AU and governments accountable on the rollout and implementation of the CAP once finalised. CSOs committed to holding their governments accountable on issues of SRHR through the regional scorecards on SRHR and the country reports on the AADPD.

We must have the hard, difficult and uncomfortable conversations. We cannot have a common voice if we are leaving so many key populations out – Kaone Gaothuse, Youth representative, Youth Advisory Board, Botswana