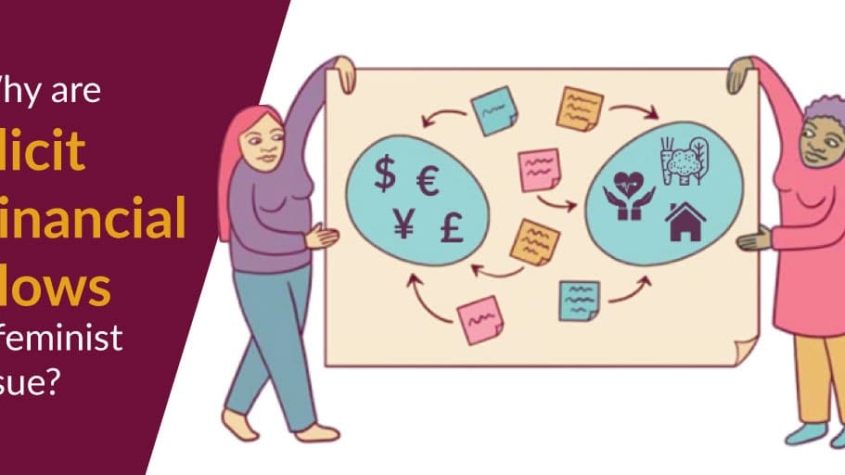 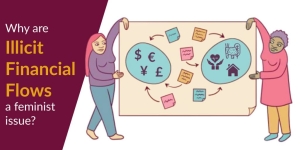 The 2015 report of the High Level Panel on Illicit Financial Flows (IFFs) from Africa (Mbeki report) estimates the continent to be losing about 50 billion dollars annually in illicit financial flows. IFFs can be defined as the movement, from one country to another, of money or capital that is illegally earned, used or transferred. Something illicit may be legal but may be unethical as it goes against the established social rules of a community. For example tax avoidance by Multi-National Corporations (MNCs) usually happens when loopholes in the law are exploited to enable companies dodge paying their fair share of taxes. This is not necessarily illegal but is unethical as it exploits the community’s resources but does not pay what is due. The sheer scale of IFFs and their negative impact on poor communities and women in particular flags it as an issue of concern that requires action.

In 2018, the Association of Women’s Rights in Development (AWID), Akina Mama wa Afrika and other partners came together to create a collective process to make feminist analysis on IFFs more accessible to feminist and social justice movements, so that they can claim those resources for gender, economic and social justice. Download the facilitation guide here.

IFFs can be broken down into three categories; proceeds from corrupt dealings like giving bribes to secure tenders; proceeds from criminal activities like poaching; and proceeds from commercial tax abuse like tax evasion and avoidance by MNCs. The Mbeki Report’s approximation of 50 billion US dollars lost in IFFs annually is said be double the Official Development Assistance (ODA) that Africa receives.  ODA is defined as government aid designed to promote the economic development and welfare of developing countries. Further, a report by the Global Financial Integrity titled “A Scoping Study of Illicit Financial Flows Impacting Uganda” estimates that Uganda loses about 2 trillion shillings annually to IFFs. That’s almost equivalent to Uganda’s health budget of 2.3 trillion shillings. The report also cites misinvoicing to be the largest measurable source of IFFs in Uganda. Over and under-invoicing of commercial imports and exports led to a loss of 6.7 billion US Dollars between 2006 and 2015.

IFFs generally go on unabated because of exclusionary global financial systems designed to favour Northern economies by facilitating the transfer of resources and raw materials to the Global North at the expense of Southern States. Most of the exploitative relationships are established along colonial lines with imperialist countries denying sovereign southern states the power to make decisions over their own economies. Furthermore, the race to attract more Foreign Direct Investment (FDIs) has led to the “tax wars” phenomenon where countries compete against each other for the lowest tax rates or highest tax exemption in order to attract investors. This race to the bottom effectively short changes citizens as investors pay next to nothing in exchange for exploiting local resources. Another enabler of IFFs is the establishment of secrecy jurisdictions or tax havens which put, many times illegally gotten wealthy out of reach of scrutiny and taxation. Most major cities like Switzerland and London have secrecy jurisdictions where many African leaders have stowed wealth stolen from citizens.

A set of methodologies and tools were developed to be applied and adapted for different learning and exchanges spaces, for further understanding and strategizing around this issue. Download the facilitation guide here.

Resources lost due to IFFs rob communities of crucial capital needed for development. In illustrating the impact of IFFs, the Mbeki report suggests many African states would have made crucial gains in attaining Millennium Development Goals if resources had not been lost. “Without IFFs, the Central African Republic would have been able to reach the Millennium Development Goal (MDG) 4 on child mortality in 45 years compared with the 218 years at current rates of progress. Other striking examples are Mauritania, 19 years rather than 198 years; Swaziland, 27 years rather than 155 years; and the Republic of Congo, 10 years rather than 120 years”

It is important to note that IFFs have a disproportionate impact on gender justice. A small tax base generally leads to budget deficits that compel governments to prioritise areas to finance, many times leaving social services as an area of concern. Key areas such as education, health and care facilities which have a direct impact on women become vulnerable to budget cuts. Furthermore, IFFs impact negatively on the economic development of countries leading to unemployment. Women are hit hardest as women are more likely to be unemployed than men. They are also more likely accept lower quality and lower wage jobs. Lastly, IFFs lead to regressive tax policies which shift the burden of tax payment away from corporations and onto individuals. The Over the Top Tax on social media and the Mobile Money tax in Uganda are two such examples. Mobile Money revolutionized access to finances for women who previously could not keep accounts at banking institutions. The tax effectively shrank women’s access to quick financial services which were crucial to their participation in the global market.

The state of IFFs in Uganda and Africa therefore merits the popularization of its understanding in order to build a movement to collectively advocate for stricter financial regulation and corporate accountability. According to United Nations Economic Commission for Africa-UNECA, taking prompt action to curtail illicit financial outflows from Africa will provide a major source of funds for development programmes in the continent in the near future. However this will require the adoption of laws, regulations and policies that encourage transparent financial transactions. Getting justice activists to understand the issue of IFFs and demand for accountability is one such step.

To gain a deeper understanding of illicit financial flows, the context in which they operate and their social and gendered impact in Uganda, download our facilitation guide here.

A new frontier on tax justice from a feminist perspective in Uganda
Making Tax A Women’s Issue
Where is the money? Why Illicit Financial Flows Are a Violation of Human Rights.