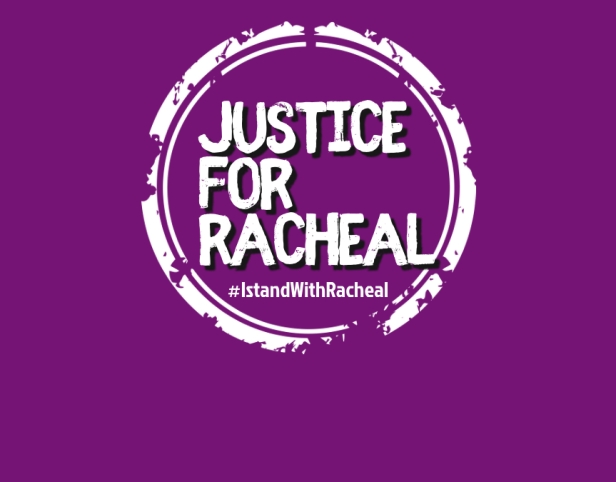 On September 29th, 2020, Edward Kisuze, a senior Administrative Assistant at Makerere University was convicted of the offence of indecent assault against Racheal Njoroge, a former student at the university. Outrageously, while the offence committed by Kisuze attracts a maximum sentence of 14 years, he was sentenced to only two years imprisonment or a fine of UGX 4,000,000, which he promptly paid and walked away a free man.

Racheal documented the assault, hoping that she could disprove the scores of people who constantly question and undermine the experiences of survivors. However, this evidence was instead used to vilify and re-traumatise her. The public’s reaction to the photograph circulating online proved that rape culture pervades our spaces and there is no vested interest in holding perpetatrators accountable. No matter the evidence and the facts of the case, the woman will be held solely responsible for sexual violence perpetrated against her . The photograph was picked apart and treated as tabloid fodder with many people looking at the assault as another salacious piece of gossip about a supposed ‘affair turned sour’, and not a gross violation of a woman’s body. The media, which constantly trivializes the experiences of survivors, played a role in enabling this disgusting discourse, calling it a “romantic act.”

Racheal’s life has never been the same again after that vicious and gruesome violation of her rights and abuse of her body. She has since been traumatized by social media trolls, lost her relationship with her father, and also lost friends and opportunities. During her trial, she attended a job interview she thought had gone well only to be asked to ‘sort her issues because her photos were all over the internet’. In spite of this, Kisuze’s penalty was a slap on the wrist. And now he is shamelessly appealing the sentence, sending Racheal into another spiral of pain and shame.

As the women’s movement, we are incredibly disappointed in this judgement but ultimately not surprised, as we have been primed to never expect justice from a system designed to favour perpetrators. However, as citizens with rights and entitlements, we remain relentless in our
pursuit of accountability and shall not rest until justice becomes a given, for women in all their diversities.

We therefore protest this sentence and appeal in the strongest terms. Women in Uganda have for long waited in pain and silence for a demonstration of justice for survivors of sexual violence. Accommodating this appeal will  expose the limitations of Uganda’s legal system which encourages women to report violence and assault on the one hand, but  punishes offenders with bare minimum sentences on the other.

How does this system deter sexual offenders? How do women in Uganda continue to exist in a system that does not believe them?

It is time that the court set a precedent. Perpetrators like Edward Kisuze should be held accountable for their actions with maximum punishment and no redress. We demand that:

To Racheal Njoroge, the women in Uganda stand in solidarity with you. We are sorry that after two years of having to face your abuser in court, this appeal opens up fresh wounds and keeps you from getting closure. We are angry, hurt and disappointed, just like you are, that this system once again let you down. We will keep trying. We will keep showing up in ways big and small, even if just to hold your hand.

We call upon all women in Uganda to show stand with Rachel  and share messages of solidarity  using the hashtag #IstandWithRacheal. If the justice system won’t hear us, we shall use all the tools at our disposal for our voices to be heard. We need justice for Racheal, and justice for all survivors of sexual violence!

16 Days of Activism. The Tide is Turning: Take a Stand Against Rape and Sexual Assault
Reimagining Leadership in the 21st Century
Submission to Parliamentary Committee On Inquiry into Allegations of Sexual Violence in Institutions of Learning in Uganda