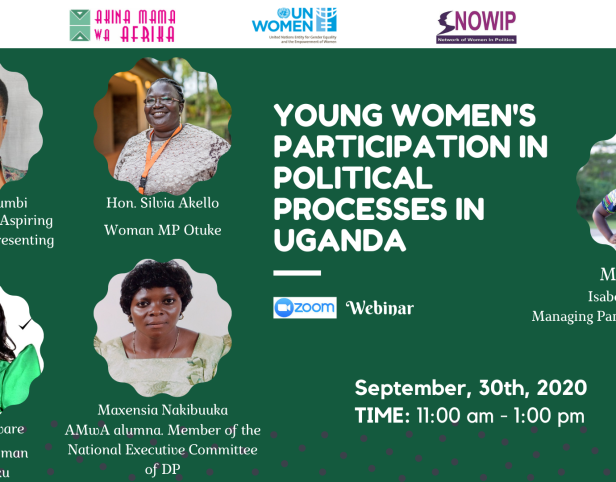 A lot of changes happened in Uganda’s political scene due to the Covid-19 pandemic. The Electoral Commission announced that elections and campaigns would be held virtually; a very challenging situation for new entrants in the political scene. We also witnessed cases of violence across the country especially during the National Resistance Movement primaries; as well as complaints about lack of funding for political activities by the various political parties. These and more challenges continue to paint the political space in Uganda; disproportionately affecting  women in the political space.

The purpose of this webinar according to Chipo Bangira, AMwA’s Feminist & Transformational Leadership Manager, was to discuss the challenges and opportunities available for advancing young women’s participation in electoral processes, specifically in regard to the 2021 general elections. “I wondered how possible it would be for the new entrants to breakthrough and penetrate the political atmosphere. I also wondered if this wouldn’t be a loophole for some people to abuse the electoral process,” Nasirumbi said, while she shared about how she felt when the Electoral Commission announced that elections would be virtual.

The panelists also shared their experiences being marginalized and restricted to only affirmative positions by the electorate and men who do not fully understand the role of women in politics. “When you contest for a direct position, the electorate ask why you are wearing a trouser; meaning why are you contesting for a position for men. This pushes us to limit ourselves to the affirmative positions,” Akware said, adding that voters consider being unmarried as a sign of irresponsibility. “If they find out that you are divorced, they think you failed in your marriage and will fail as a leader. When they find out your husband comes from another district, they ask you to go and contest in your husband’s home district because that’s where you belong,” she said.

Nakibuuka while sharing about the threats deterring women from participating in politics mentioned that elections in Uganda today are marred with violence characterized with fighting, arrests, teargas and bullets; which scares some women from actively participating in elections. Achom shared that politics in Uganda today is very toxic for women. Women are considered more for presentation rather than representation. “You walk into a room with a man who is shabby but the first thing they’ll consider is how she is dressed,” she said, adding that “Men continue to enjoy privilege. When we go for a radio show at 9Pm, a man cannot be raped on his way back but something could happen to me at that time. You find that I am on the lookout and worried every other time”.

Discussing collective actions that would encourage more participation of women in politics, the panelists pointed to the need to strengthen their solidarity as women in the political space despite their political divide. “We need more women in the politics space who are feminist minded. I insist on feminist minded because if we have a feminist sister in this space, then she will understand what these women face and be able to help,” Achom said.

In her closing remarks, Agripinner Nandhego, the UN Women Program specialist for political participation & leadership said the forum is useful for young women in politics to share experiences and learn from each other. “As a country, we have an existing legal framework that encourages women and youth participation in politics. The challenge however is that despite these existing legal frameworks, young women continue to face challenges within the political parties and also within society. My thinking is we can work together to continue educating people in the society through civic education that women have a right to take up leadership and once they do take up these positions don’t question their abilities,” she said.