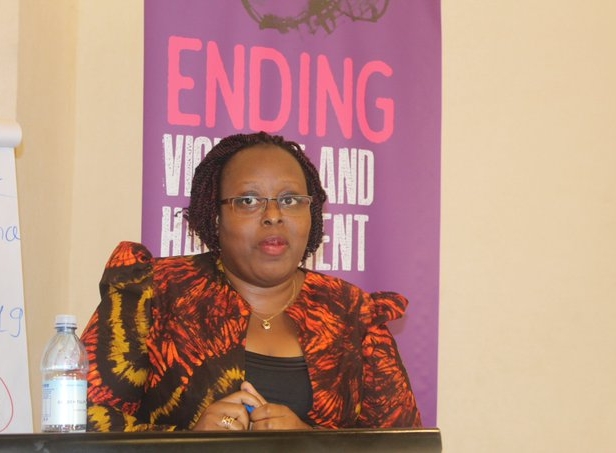 On 21st June 2019, the International Labor Organization (ILO) Convention 190 (C190) on Violence and Harassment was adopted in a historic moment that ushered in a fresh set of protections for workers and established global standards to end gender based violence and harassment in the world of work. The centenary International Labor Conference voted overwhelmingly in favor of the convention as a result of the combined efforts of women workers, unions, parliamentarians, journalists and human rights activists. The convention is the first of its kind with a specific focus on Gender Based Violence (GBV) and Uganda, like many other ILO member countries adopted the convention, signaling a commitment to domesticate and implement the aspirations of the framework.

Ahead of the 16 days of activism, a global campaign to end violence against women and girls, Akina Mama wa Afrika (AMwA) in partnership with the Uganda Hotels, Food, Tourism, Supermarkets and Allied Workers Union (HTS-Union) and the Uganda Horticulture Industrial, Service Providers and Allied Workers’ Union (UHISPAWU) with support from Hivos hosted an advocacy strategy meeting to deliberate on the newly passed Convention to strategize on avenues for ratification, domestication into national law, and its implementation to create safer work environments for women workers. The goal of the 21st November forum was to build and strengthen collective actions to accelerate efforts to ratify the convention in Uganda. 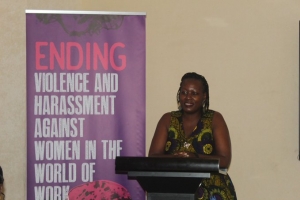 Violence and harassment in the world of work disproportionately and uniquely impacts women, prohibiting them from fully realizing their human rights. It is therefore important that there is consolidated support from all actors to ensure that the ILO Convention 190 is ratified in Uganda. This will be a step closer to ensuring that women’s rights are safeguarded and workplaces made safer for women and all employees – Eunice Musiime, Executive Director, AMwA

In a keynote address that unpacked the provisions of the Convention, Hon. Martin Wandera the Director of the Labor at the Ministry of Gender, Labor and Social Development stated that the ILO convention 190 is the first normative standard aimed at ending violence against women in the world of work. He added that the Convention stipulates that violence at work, whether physical or emotional is unacceptable and that Convention 190 seeks to protect the rights of employees, employers, volunteers, interns, job seekers and all other stakeholders at workplaces. In his address, he further noted that adoption was simply the beginning and had to be followed by wide ratification and domestication. He highlighted the steps that the government has undertaken to ensure that Uganda ratifies the Convention. These included carrying out a rapid review of the Convention, reaching out to the Solicitor General and mobilizing labor unions and civil society to push for the ratification. 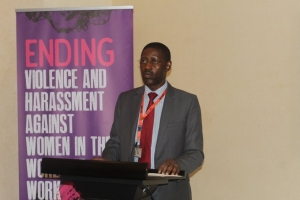 The Convention makes it clear that governments, employers and workers in the world of work, have a role to play in providing and sustaining a work culture that is based on mutual respect and the dignity of human beings – Hon. Martin Wandera

Following the pace set by Hon. Wandera, Vicky Kanyoka, the Africa Regional Coordinator at the International Domestic Workers Federation stepped in to share the journey to the adoption of the ILOC190 in June. She noted that the lived experiences shared by workers in the informal sector were key in the process of the adoption of the convention. The consultations also involved conducting workshops to educate, create awareness and generate demand for action on violence against women at regional level ahead of the ILO conference with both workers from the formal and informal sectors.

My takeaway is that we need to strengthen collaboration with grassroots movements. Even when the Convention is domesticated, grassroots and local organisations must be sensitized about the C190 so that they are able to champion change at local level. – Participant

Also present was Hon. Robina Rwakoojo, the Chairperson of the committee constituted by the Parliament of Uganda to investigate sexual harassment at institutions of learning in the country. She reiterated the findings from the investigation which revealed that sex for marks and rape are the most rampant forms of sexual harassment especially at institutions of higher learning. One of the recommendations made by the committee was for background checks to be made for all teachers and lecturers.

A panel comprising Susan Aciro from the National Union of Women with Disabilities in Uganda (NUWODU) and a TuWezeshe Akina Dada fellow; Janepher Nassali, the Secretary General of UHISPAWU; Assumpta Namaganda, the Deputy Secretary General at the HTS-Union and Jessica Mwijuka representing women market vendors then delved into the manifestations of sexual violence in the world of work. The panelists moderated by ActionAid International’s Harriet Gimbo narrated various experiences women face in their spaces and the mechanisms they have put in place to ensure that their workplaces are safer for women. Women working on flower farms who have come out to report acts of violence against them were reported to often suffer discrimination and in some instances, paid off to remain silent. Relatedly, women with disabilities are forced to suffer in silence because society dictates that sex is a privilege for them. According to Susan, it is hard for them to report cases because of limitations such as difficulty in communication.

During peak seasons like Valentine’s, women working on flower farms are forced to leave work late and many have been harassed on their way back home. Some did not live to see the next day because they have been waylaid and killed – Janepher Nassali

Efforts to ensure that women enjoy their rights shared included training differently-abled women to strengthen their confidence in speaking out and reporting cases of violence against them as well as including women on flower farm committees to address issues of concern to women workers. Panelists recommended that the passing and consequent implementation of the Sexual Offences Bill is fast-tracked as well as the Minimum Wage Bill which will guarantee women’s freedom from precarious conditions of work at the hands of employers since violence against women in the informal sector is largely linked to poverty.

Our sector is rife with violence against women. We deal with hospitality and sometimes men think that this comes with sex. Because we lack a minimum wage, women are forced to ‘please’ the client at whatever cost to provide for their needs – Assumpta Namaganda

Still on lived experiences, Samantha Mwesigye, a former Senior State attorney at the Ministry of Justice who experienced harassment spanning a decade at the hands of her supervisor shared her reality of violence at the workplace for which she has not received justice yet. Here and now, we continue to commend Samantha and other sisters who have experienced violence for their courage in speaking out against harassment. We believe you! We continue to call on the Government of Uganda to ratify and implement ILO Convention 190 and incorporate key provisions of the instruments at the local level including in state laws and policies, local ordinances and executive orders to provide safer working conditions for women workers in Uganda.

Statement on the Ratification of ILO Convention C 190 on Ending Gender Based Violence in the World of Work
Creating Safe Spaces to Break the Silence on Violence for Differently Abled Women in Uganda
#CSOToo: Women in the Civil Society Organisations in Uganda Call for Improved Solidarity with Survivors of Sexual Violence