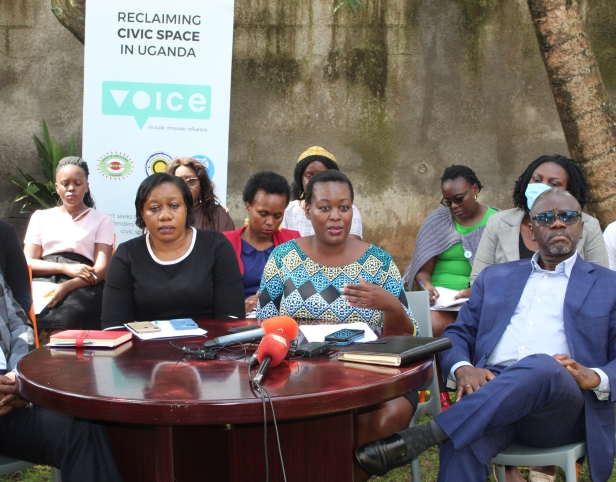 We, Ugandan civil society leaders, are alarmed by the escalating violations of human rights in the country, the undermining of our road to democracy and the colossal failure of our state institutions to stop the tide and ensure that sanity reigns in the country. It is apparent that since the events of 2017 when our parliament was overrun by the same military that is supposed to protect and defend our institutions, our country has experienced increased onslaught on our democracy. The illegal detention of hundreds of Ugandans, state sponsored kidnappings and disappearances of young Ugandans, extra judicial killings of Ugandan citizens in direct retaliation to the exercise of their freedom of association, peaceful assembly, freedom of expression and the right to vote represents a partner of abuses that undermine everything that we are as a country.

The pattern of human rights abuses and violations is consistent
It is no longer in doubt that since the start of the official presidential and parliamentary election campaigns in November 2020, not less than 500 Ugandans have been abducted, kidnapped, held in without trial or in military facilities and “safe houses”, or killed extra-judiciary. On November 18 and 19th alone, it is estimated that over 100 Ugandans were executed on the streets of Kampala in a bid to contain protests that were triggered by the arrest of NUP Party flag bearer Robert Kyagulanyi Ssentamu. The fact that Mr. Kyagulanyi has never been prosecuted for the alleged violations of COVID19 standard operating procedures is one clear evidence of how the regime used the pandemic as an instrument to disrupt normal political campaign activities. Most importantly, the fact that while a few of the citizens arrested in this onslaught have been arraigned before the courts of law, an unknown number has been found dumped in jungles and other remote places, often in poor health, bearing torture marks and for some women reported to have been sexually violated.

President Museveni’s acknowledgment of the complicity of the Special Forces Command is a step in the right direction.
We take not of the fact that President Museveni is increasingly acknowledging and taking responsibility for the increased violations of the rights of Ugandans by the security forces, especially the Special Forces Command of the Uganda Peoples Defense Forces. We note that after consistent denials, Mr. Museveni acknowledged in his December 31, 2020 New Year address that Isaac Ssenyange, alias Zebra Mondo, was assassinated in a botched mid-night security operation when his house was attacked. In his March 14, 2021 address, Mr. Museveni for the first time unequivocally admitted that his own presidential protection force – the Special Forces Command (SFC) is either culpable or complicit in holding most of the members of the opposition National Unity Platform Party under the guise of investigating possible criminal acts related to insurrection. We believe that the acknowledgement by Mr. Museveni that it is Ugandan security forces under his command that are responsible for these violation is a step in the right directions to end the impunity that is on display in our country today.

Trial of civilians in military tribunals goes against the spirit of our constitution
We also take note of the incumbent regime’s growing practice of trying Ugandan citizens in military tribunals. This practice is akin to the dark days of Idi Amin’s regime in the 1970s when the excesses by the military became the order of the day. The current actions of Mr. Museveni’s Special Forces Command of detaining people in un-gazetted detention facilities and charging civilians in military tribunals shows how the regime itself has lost confidence in other institutions of state especially the Uganda Police, the Uganda Prisons, and more importantly, what should be our Nation’s judicial system. If these people have committed offenses as the regime alleges, why not subject them to the due process of the law by presenting them in courts of law and prosecuting them? Why kidnap them crime gang style? Why torture them? Why detain them in military facilities?

The ongoing violations are against the letter and spirit of Uganda’s constitution and violates every norm enshrined in the African Union Charter and other international human rights instruments.
As civil society leaders, we note that the spectra of human rights violations constitute serious breach of various rights and freedoms enshrined in the Ugandan Constitution, the African Charter on Human and People’s Rights, and the International Covenant on Civil and Political Rights, including the right to dignity, personal security, bodily integrity, freedom from torture or inhumane or degrading treatment, and personal liberty. We wish to remind the incumbent regime of its primary responsibility to take all necessary institutional, political, socio economic measures to ensure the safety and security of her people from all situations that threaten their life, physical and social security. We therefore demand that:

President Museveni’s regime must end all violations of human rights
We call upon President Museveni to demonstrate his statesmanship and pan-African credentials to end the ongoing violations of the human rights and dignity of our people. As the Commander-In-Chief of the armed forces, we know that it is within his power to end the agony of these suffering Ugandans, to end pain of mothers and fathers who are grieving over the death of their children or those that have disappeared without trace. We know that President Museveni can prevent the next Ugandan child from becoming an orphan or the next Ugandan woman or man from being widowed by the reckless actions of his military. We therefore demand that President Museveni honor the commitment he made at the recently concluded IPOD Summit to order for the immediate release of our people from illegal detention and account for all those who have been murdered or are missing.

The Ugandan Parliament must speak out and speak loud
We therefore call upon Speaker Rebecca Kadaga, Deputy Speaker Oulanya and all our Members of Parliament to go beyond symbolic debates and muted voices of disapproval and demand for a full independent inquiry into the conduct of the 2021 presidential and parliamentary elections, and the conduct of the armed forces with regard to the ongoing abductions, illegal detentions and assassinations and regime sponsored extrajudicial killings. The framers of our constitution established parliament as our last line of defense against excesses of regimes like the one we are confronted with today. By only expressing muted voices of disapproval and engaging in symbolic debates, Parliament Speaker Rebecca Kadaga, Deputy Speaker Jacob Oulanya are giving the impression that parliament is either helpless in the face of a belligerent regime or tacitly approve the excesses of the regime.

We Stand in Solidarity with all affected Ugandans
We stand in solidarity with every other Ugandan who has been affected by the situation that is still unfolding before our eyes. The grieving mothers and fathers whose loved ones have been brutally murdered or tortured by elements acting on behalf of the regime. We stand in solidarity with families that are still waiting with hopeless hope that their loved ones may one day be released from the fangs of state institutions that are designed to protect them but have instead turned against them. Our commitment is that no matter how long it takes, our generation must do whatever it takes every single day to ensure that there is full accountability for each of our citizen who has either gone missing or was extra-judiciary killed in yet to be explained circumstances.

An attack on one Ugandan is an attack on all of us
We challenge all of us citizens to understand that an attack on any one of us is an attack on all of us. In the face of adversity, we are neither NRM nor NUP. We are neither Catholics, Anglicans, Muslims, Adventists or orthodox. We are none of our tribes or other affiliations, We are simply Ugandans. We are WE THE PEOPLE as declared in the preamble to our Constitution. We must therefore be unyielding in our continuing struggle to build a more perfect country and a democracy where respect for human life and human dignity are the defining values of who were. This is our pledge.

Statement on the Continued Harassment and Arrest of LGBTIQ Persons in Uganda
THIS IS NOT THE TIME FOR UGANDA TO HAVE A HEALTH BUDGET CUT!
Unearthing Women’s Foils and Triumphs in the Workplace in Uganda