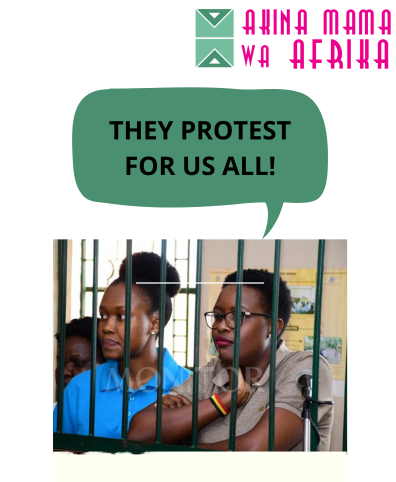 After being charged with convening an illegal assembly and instigating violence, the Uganda Police detained six opposition women leaders in Luzira Prison until Tuesday, June 7, 2022. The accused leaders and activists are members of the second-largest opposition group, the Forum for Democratic Change. They are; Doreen Nyanjura (Kampala Deputy Lord Mayor), Hon Adeke Anna (Member of Parliament representing Women in Soroti), Wokuri Madanda (former Mbale District Woman MP aspirant), Susan Nanyonjo (Mityana Municipality Mayor 2021 Aspirant), Alice Amoni (an AWLI alumna from the recent UN Women 2021 cohort), and Mariam Kizito (Head of FDC Women). They were arrested on the 30th of May, 2022 as they marched in protest of the rising fuel and commodity costs, as well as demanding the prompt release of former FDC President, Dr. Kizza Besigye who is now being held on remand for organizing a demonstration against rising commodities prices.

We vehemently oppose this act and reiterate that protest is a human rights action. The significant rise in fuel costs and other household commodities in Uganda is indeed alarming and deserving of attention. It is well known that as primary caregivers, women are often the first to give up the use of basic needs like food and medical care so that their children and family can survive during scarcity. The persistent rise in these commodities translates to an increase in women’s vulnerability and financial dependency. The danger of this is that it widens the economic and gender inequalities and further exposes women to sexual and gender-based violence, an increase in unpaid care work, and negligence of self-care and well-being. In Uganda, cooking oil, laundry bar soap, fuel (petrol and diesel), and various services such as transportation costs and education services have all increased significantly, prompting public concern. The coordinated and peaceful protest led by the six opposition women leaders is therefore timely and pivotal. We demand the immediate and unconditional release of the opposition women leaders, Dr. Kiiza Besigye, and all political prisoners based on the fact they are well within their human and constitutional right to stage a protest.

There is absolutely nothing violent or unwarranted about their protest or its form. Instead, the indifference, negligence, and complicit participation of the state in the economic plight of its people is economic violence and economic injustice.

Statement on the Ratification of ILO Convention C 190 on Ending Gender Based Violence in the World of Work
Statement on the Continued Harassment and Arrest of LGBTIQ Persons in Uganda
COP 26 MUST GUARANTEE AN ECOFEMINIST FUTURE FOR THE PLANET!