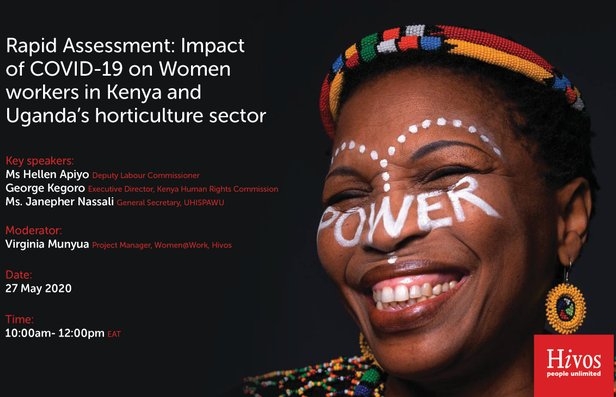 Flowers are a luxury unlike food and shelter, but to the workers around the world, who pick and prune and spray every day so that our weddings, homes, and offices have a natural pop of color; they are a necessity.

The COVID-19 pandemic and the resulting worldwide lockdowns affected all industries but few were hit as hard as the horticultural industry. This is because flowers are a highly perishable item and any delays or disruptions lead to massive losses. Canceled occasions and empty venues became the norm, with people opting to host their celebrations online if any.

To determine the implications of COVID-19 on women workers in Uganda’s horticulture sector, Hivos, under the auspices of the Women@Work Campaign commissioned an assessment titled “The Impact of COVID19 on women workers in the horticultural sector in Uganda.” The assessment sought to inform and shape industry and policy measures for mitigating the negative impacts of the pandemic on women who work on flower farms.

Hivos East Africa then, hosted a webinar on 27th May 2020 to delve into the findings of this assessment. The discussion revealed existing gaps in the horticultural industry and explored some of the good practices adopted by enterprises to support their workers.

According to the Uganda Horticultural Industrial Services Provider and Allied Workers Union (UHISPAWU), approximately 4000 workers were sent home following the lockdown, most of them without pay. For the 5 farms sampled for this study, 1,360 out of 2,710 workers had been sent home on leave.

Most of the workers sent home were flower pickers. These are often casual laborers, which make it easy for them to be laid off work with impunity when demand is low. They were left stranded as the majority of casual laborers lack access to social protection systems.

According to the study, women workers reported intensified unpaid care work due to the lockdowns and closure of schools, as well as the inability to afford food and other basic needs. The right to health care was affected as the transport ban coupled with financial constraints made it difficult to access medical care. As a result, some of them resorted to traditional healers; a clear indication that government interventions were not sensitive to the specific needs of women workers. Commenting on a press statement released by The Uganda Horticultural Industrial Services Provider and Allied Workers Union (UHISPAWU), Janepher Nassali, the Union’s General Secretary said “as long as the situation does not normalize in Europe and locally, the flower sector still faces a very big challenge yet it employs many Ugandans with dependents.”

On this basis, UHISPAWU demanded that the government of Uganda extends food support to workers who were laid off or put on mandatory unpaid leave, as the defined categories of the “vulnerable poor’ who would receive aid, did not include them. The union also stressed the need for the Parliament of Uganda to pass into law the National Social Security Fund (NSSF) bill, with a clear emphasis on accessibility so that workers can have access to their savings in this time of crisis.

In addition, Ms. Nassali emphasized the importance of all workers belonging to a Trade or Labor Union so that they can have collective bargaining power, especially in times of economic crisis.

The study explored possible solutions to the challenges ushered in by the Covid-19 pandemic, recommending the adoption of a gender-sensitive and intersectional lens in responding to the effects of the pandemic, to ensure the centering of women and other marginalized groups’ needs. The study also challenged the government to prioritize social protection systems and social security, monitor and regulate the ongoing changes in labor relations, regulate the prices of food and other essential goods and offer personal protective equipment and healthcare for the horticultural sector, amongst other measures.