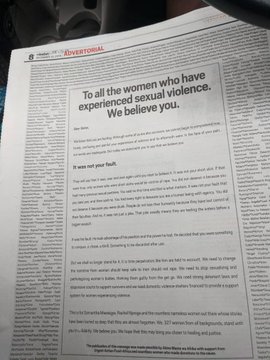 In commemoration of the International Human Rights Day on December 10th, a day that also marks the end of the 16 Days of Activism, a global campaign which highlights the pervasiveness of violence against women and girls across the world, Akina Mama wa Afrika ran a full page spread in the Daily Monitor, one of the daily newspapers in Uganda in support of survivors of sexual violence with the message below. 327 women from all backgrounds took a stand against the vice resolving not to remain silent in the face of unchecked sexual violence against women and girls.

To all the women who have experienced sexual violence. We believe you.

We know that you are hurting. Although some of us are also survivors, we cannot begin to comprehend how lonely, confusing and painful your experiences of violence and its aftermath were. In the face of your pain, our words are inadequate. But today we stand with you to say that we believe you.

It was not your fault.

They will say that it was, over and over again until you start to believe it. It was not your short skirt. If that were true, only women who wore short skirts would be victims of rape. You did not deserve it because you had many previous sexual partners. You said no this time and that is what matters. It was not your fault that you said yes, and then said no. You had every right to because you are a human being with agency. You did not deserve it because you were drunk. People do not lose their humanity because they have lost control of their faculties.  And no, it was not just a joke. That joke usually means they are testing the waters before a bigger assault.

It was his fault. He took advantage of his position and the power he had. He decided that you were something to conquer, a chase, a thrill. Something to be discarded after use.

But we shall no longer stand for it. It is time perpetrators like him are held to account. We need to change the narrative from women should keep safe to men should not rape.  We need to stop sexualizing and pathologizing women’s bodies, thinking them guilty from the get go. We need strong deterrent laws and responsive courts to support survivors and we need domestic violence shelters financed to provide a support system for women experiencing violence.

This is for Samantha Mwesigye, Rachel Njoroge and the countless nameless women out there whose stories have been buried so deep that they are almost forgotten. We, 327 women from all backgrounds, stand with you in solidarity. We believe you. We hope that this may bring you closer to healing and justice.

16 Days of Activism. The Tide is Turning: Take a Stand Against Rape and Sexual Assault
#CSOToo: Women in the Civil Society Organisations in Uganda Call for Improved Solidarity with Survivors of Sexual Violence
Building Feminist Leaders to Accelerate the Implementation of the Kampala Declaration on Sexual and Gender Based Violence