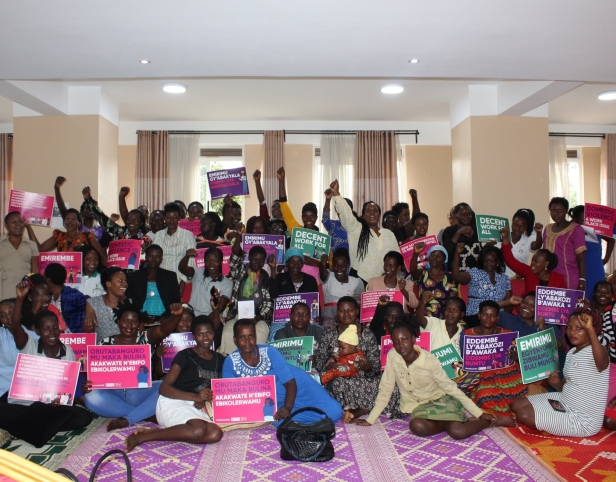 Ending violence and harassment in the world of work means ending sexual harassment and abuse for all women workers at all workplaces, formal or informal since the vice pervades all sectors. However, more often than not, women’s experiences of abuse and exploitation in the informal sector, a sector particularly rife with all forms of sexual abuse, go unnoticed as effective response mechanisms are absent because the arm of the law does not cover the sector. In Uganda’s experience, the Employment Act and the Employment (Sexual Harassment) Regulations, 2012 which are inadequate in responding to sexual violence in the formal economy, do not apply in the least to the informal economy. Both regulations require that an establishment has at least 25 employees in order to put in place a sexual harassment policy, which excludes a great section of the informal sector where a number of enterprises have only one employee.

The recently adopted ILO Convention 190 on ending violence and harassment in the world of work recognizes violence against women in the world of work as a global concern which negatively impacts women’s human rights and lays out minimum standards to address it. While regulations restrict a place of work to a limited space, the Convention redefines the scope of what constitutes a workplace and who a worker is, to include workers in the informal economy. Seeking to enhance understanding of sexual harassment by women working in the informal economy, AMwA together with the Strategic Initiative for Women in the Horn of Africa (SIHA) convened a pool of women street vendors from Bwaise, Naguru and Wandegeya, women from flower farms, women market vendors and domestic workers to break the silence on sexual violence in the informal sector in Uganda. The 5th December conversation was a step towards ending violence against women by taking action across movements and mobilizing women to collectively work towards advancing women’s rights in the world of work.

As they walked into the room set to Ugandan dancehall music to lighten the mood, one could hear murmurs and echoes of what the women thought constituted sexual harassment at their workplaces and speculation as to what brings men to commit such atrocious acts. With experiences of abuse here, and how they responded to such situations there, no one could refute that this was a long over-due conversation. Over 50 women had come together seeking a platform where they would quash their fears around sexual harassment by adopting and developing mechanisms to combat the vice. The meeting was officially opened by AmwA’s Research, Advocacy and Movement Building Manager, Leah Eryenyu together with SIHA’s Martha Tukahirwa who both highlighted that the circle was a brave and safe space created to encourage women to speak about sexual harassment and accordingly strengthen collective efforts to end sexual violence at all workplaces.

Before they dived into the conversation, the women took part in an African yoga session which was facilitated by Mildred Apenyo from Fitclique Africa. Learning from Audre Lorde, caring for ourselves is not self-indulgence, it is self-preservation, and that is an act of political warfare. The participants were stepping out to tackle a vice that has negatively and disproportionately impacted women’s participation in the world of work and therefore needed to renew their energies. Further, the nature of their work coupled with the burden of care work, paid or unpaid, accords them little or no time for their personal rest and relaxation. This session looked to prompt a new practice of prioritizing their needs which are overlooked by the world around them.

Guided by Diana Kagere, participants then discussed sexual harassment at their workplaces and its manifestations. According to the women in the room, sexual violence constitutes rape and related unwelcome conduct of a sexual nature such as sexual compliments which are commonplace at the markets, to consumers and vendors, alike. They added that request for sexual advances in exchange for rights including promotions, salary increment, favourable treatment by law enforcers at the marketplace was another form of harassment they experienced. The women expressed their distress at the fact that they have been forced to endure harassment with no way out since they urgently need the money to make ends meet. Ms. Kagere explained the types of harassment at the workplace which include the aforementioned quid pro quo as well as harassment as a result of a hostile working environment. She further stressed that unequal power relations between women and men are the root cause of violence against women and the need for consent, free from duress, in the form of a verbal yes.

Participants then shared experiences of abuse at their different workplaces, on the way to or from work as well as in their homes from their partners. While one woman working in the marketplace narrated an experience where she was asked for sex in order to receive a stall at the market, another told of how she was raped by a bystander on the way to work. They expressed their fear of speaking out noting that most of the abusers hold positions of authority and have the power to retaliate while for others, society would not believe them. The case of Samantha Mwesigye who experienced backlash from the public after reporting a case of abuse was cited. The participants were however encouraged that there is power in movements and were urged to unionise in order to speak more boldly about issues affecting them.

“At the market, when you report, the abuser is transferred to another market and the cycle continues”

#RatifyILO190 Twitter Chat: Tackling Violence and Harassment in the world of work.
Making Sure HR Managers in Uganda Prioritize Sexual Harassment at Their Workplaces
Catalyzing New Levels of Transformative Mentorship to Strengthen the Voice and Agency of Young Women Leaders