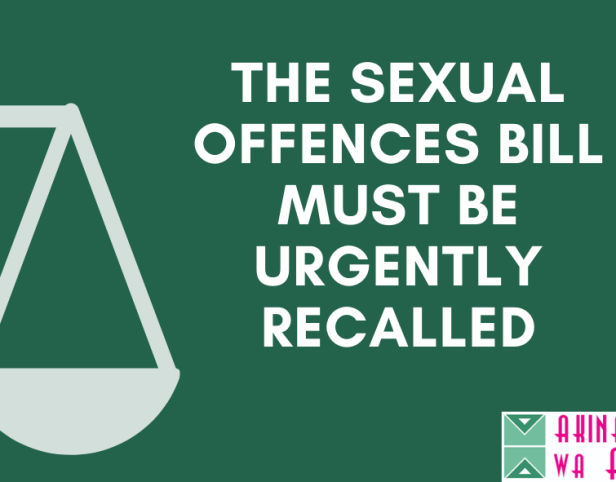 Akina Mama wa Afrika, joins the human rights fraternity and feminist collectives to express our consternation regarding the recent decision by the Parliament of Uganda to pass the Sexual Offences Bill, 2019 on 3rd May 2021. While we welcome specific clauses that speak to indecent assault, sextortion, child rape, sex tourism and trafficking, the lasting implications of clauses amended and added to the Bill mean that the true objective of the Bill as was first proposed will not be met.

The Sexual Offence Bill first drafted in 2000 and tabled as a Private Member’s Bill was envisioned as an instrument that would consolidate laws relating to sexual offences as well as address some of the gaps in existing legal frameworks in regard to sexual violations. Within that time, the Bill has undergone significant amendments, some of which have altered its very essence and further created room for the extension of criminalization of different groups of women and sexual minorities in Uganda.

In analyzing the Sexual Offences Bill as it currently is, it is essential that we factor in the lived realities and human rights concerns of all Ugandans, regardless of gender and sexual orientation, class, and other intersecting identities. In that regard therefore, the Bill as passed by Parliament violates principles of equality and non-discrimination that are core to the advancement of human rights for all in Uganda.

Recommendation and Conclusion
As such, we continue to appeal to legislators, the public and the President to reject the Bill as is and instruct parliament to present a revised Bill that takes into account the full spectrum of human rights protection in addressing sexual violence.

We implore the parliament of Uganda to make extensive consultations with all members of the community to ensure that diverse groups are protected by the Bill because if a law negates the needs and rights of one group in society, it is by that very nature discriminatory. Uganda as a signatory to the different international and regional human rights instruments, must reflect these promises and obligations in domestic law.

We therefore stand in solidarity with all Ugandan women, in all their diversities, LGBTQI persons and all those criminalized and affected by the Sexual Offenses Bill.

Statement on the Continued Harassment and Arrest of LGBTIQ Persons in Uganda
16 Days of Activism. The Tide is Turning: Take a Stand Against Rape and Sexual Assault
Submission to Parliamentary Committee On Inquiry into Allegations of Sexual Violence in Institutions of Learning in Uganda