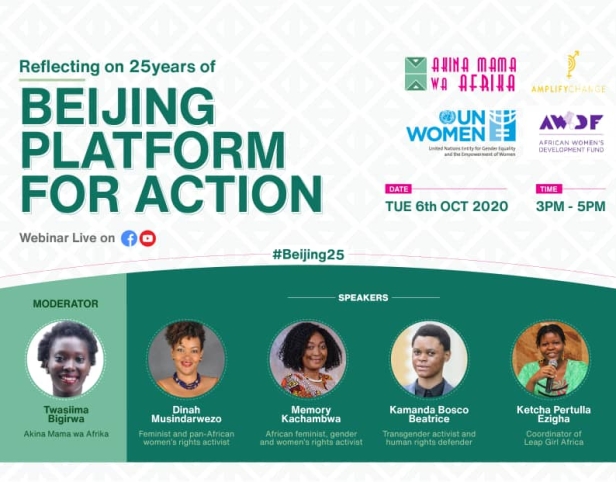 25th September 1995 was historic in the women’s movement in Africa and the world at large. Representatives of 189 governments, UN agencies, intergovernmental organizations, feminists, activists and organizations from all over the world convened at the Fourth World Conference on Women to recognize women’s rights as human rights; an event that laid the foundation for the rights and freedoms women across the world enjoy today.

This conference led to the adoption of the Beijing Declaration and Platform for Action which set an agenda under 12 critical areas for the attainment of gender equality. These areas covered women and poverty, education and training of women, women and health, violence against women, women and armed conflict, women and the economy, and women in power and decision-making; just to mention.

As the world commemorates this remarkable silver anniversary of the Beijing conference, we were presented with an opportunity to reflect on whether or not the platform has delivered on the promises and change envisaged 25 years ago.

Held under the theme ‘Reflecting on 25 Years of the Beijing Platform for Action’, the webinar attracted the participation of over 200 women from all across Africa; all interested in dissecting how far governments and stakeholders have gone in achieving the Platform for Action’s promises in as far as human and women’s rights are concerned.

In her remarks, Dinah Musindarwezo noted that despite the progress made in implementing policies and laws to uphold and fight for women’s rights and freedoms, there’s still a lot to be achieved in terms of governments taking up the primary responsibility to promote women’s rights as well as cherry-picking the best bits of equality for women to respect and recognize.

“Today it seems like equality of women has been translated to mean let’s help women start small businesses, let us provide them with microcredits to start a business here and there. By so doing we have de-politicized the agenda from what it should be and from what Beijing promised,” she said, adding that “…these are things we are grappling with especially when they are promoted by big institutions working on gender equality and women empowerment yet with a lot  of influence on governments. This minimizes the importance of achieving women’s rights in their entirety as a critical agenda”.

Speaking about intersectionality, Kamanda Bosco noted that  25 years later, African women demanding for their full rights is faced with derogatory statements as it is still considered a westernized and controversial concept.

“When we look back from 1995 to this date, there has been progress made but has it been intersectional? Do trans-people have access to sexual and reproductive health services? We are dying of HIV! The lack of` intersectionality keeps on showing that the challenges keep on increasing even within the cross-cutting themes,” she said.

Pertulla called for deliberate efforts to include women in hard to reach areas with limited access to the internet. “We need to think about how to make the internet accessible to them to learn what gender equality and the Beijing Platform is about. How are their voices being included in consultations and awareness,” she said.

Addressing the issue of NGOization of the feminist movement, Memory called for a hybrid aproach that blends movements and organisations.

“The beauty about movements is that there are not a lot of constraints from bureaucracy and power issues. Power dynamics usually come in when that movement or cause is being boxed into an institution that needs resources and infrastructure. So when we look at Beijing 25 years later, there’s a need to have that blend and hybrid for the women’s movement. We need anchor organisations which can help in pursuing those key instruments and following through within that process. But we also need movements to be able to drive that agenda,” she said.

The panelists discussed how feminist perspectives have integrated into the big wins of achieving gender equality as BFA turns 25, the progress of the Beijing Platform of Action in Africa; Its genesis, gains, and setbacks thus far, challenges affecting the implementation of the BFA agenda and how young women can be supported to engage actively in processes that lead to the fulfillment of the promises of the Beijing Platform for Action; just to mention.

For the next 25 years the panelists called for a balance out of power so that women are able to fully address the different forms of oppression they continue to face. The panelists also called for a total recognition and respect of all women and human rights and inclusion of all women in their diversities.

The purpose of this webinar was to take stock of the achievements of women’s rights and gender equality and discuss collective actionable for the implementation of regional and international policy frameworks on gender equality.

In commemoration of the 25 Years of Beijing Platform for Action, AMwA also published a journal titled “The Beijing Dispatch”, sharing reflections from women on the continent about whether the Beijing Platform has delivered change for them 25 years on. The journal is available here.

#MeToo?: Building a movement to end impunity on sexual gender based violence in Uganda
Who Needs Feminism? Everybody
Building Feminist and Transformational Leaders at Action Aid Uganda