On the 31st of March, 2020, Akina Mama wa Afrika organized a tweet chat under the theme, “Ending sexual harassment at the workplace.” The chat was part of the online campaign urging governments to ratify, domesticate and implement the ILO Convention 190 which is the first international standard that aims to put an end to violence and harassment in the world of work. The tweet chat was moderated by Rosebell Kagumire, Editor of African Feminism and facilitated by Primah Kwagala, Executive Director at The Women’s Probono Initiative, Samantha Mwesigye, an activist and lawyer and Fiona Laker, a medical student and lifestyle blogger. The tweet chat lasted for two hours although the campaign is still going on under the #RatifyILO190. The participants discussed the definition of sexual harassment at the workplace, the different ways in which it manifests and the myths surrounding it. The conversation then delved into the laws and policies that address sexual harassment, women’s access to justice and the reach of these laws with regard to women who work in the informal sector. Finally, they explored the key actions necessary to make workplaces free from sexual violence. These were the questions asked during the tweet chat.

The predominant definition provided by the ILO Convention 190 states that  sexual harassment constitutes a range of unacceptable behavior and practices, or threats thereof, whether a single occurrence or repeated, that aim at, result in, or are likely to result in physical, psychological, sexual or economic harm, and includes Gender Based Violence. The participants noted that sexual touches, innuendoes in conversation and digital texts whether subtle or overt count as sexual harassment as long as they are unwelcome.

The myths around sexual harassment mentioned by the participants include but are not limited to: the idea that it’s only physical and never verbal, the idea that it is caused by how the woman dresses, that remarks on someone’s body or clothing are not harassment but rather compliments,  that it is motivated by a desire for sex and not power and dominance, that it only occurs if there’s a power imbalance (even peers are capable of sexual harassment) and that it is a normal part of women’s experience at the workplace.

The participants agreed that these myths persist because of a work environment that subordinates women at the workplace and encourages the entitlement of men to women’s bodies.

The patriarchal system we live in places men above women in the power hierarchy which results in perpetrators being believed over their victims and never facing consequences for their actions. Women, knowing this, do not come forward when they are facing sexual harassment and the few who do are vilified and accused of seducing the perpetrators.

One of the participants noted that women are at the bottom of the economic pyramid and men in positions of power take advantage of their financial vulnerabilities to push for sexual favors. This skewed power dynamic is reinforced by institutions and society at large. These all normalize sexual harassment in the workplace and facilitate the blaming of victims when they report its occurrence. In addition, the lack of sexual harassment policies in workplaces also puts women at a disadvantage.

The laws pertaining to sexual harassment in Uganda include; The Employment (Sexual Harassment) Regulations 2012, The Public Service Standing Orders and Section 128(3) of the Penal Code Act. Regionally, Article 3 of the Maputo Protocol on the right to dignity and most recently, the International Labor Organization Convention 190. The Ugandan law mandates that in an establishment with more than 25 workers, the employer must issue a sexual harassment policy. The participants pointed out that this provision does not cater for employees in offices with less than 25 employees, self-employed workers and workers in the informal sector.

The participants noted that there is silence around sexual harassment at the workplace which leaves rooms for perpetrators to act. The law mandates that the sexual harassment policy be displayed publicly with all employees having access to it but, this is not the case and the law is largely ignored. One of the participants asserted that a lack of information is not the problem.

In light of the #MeToo movement, information on sexual harassment is readily available all over the internet but the topic is not treated with the gravity it deserves.

The participants advised that in case of sexual harassment at work, the victim should collect as many details as they can and witnesses or evidence (inappropriate pictures, texts). They must ensure that their company’s management is aware of the harassment as it is their duty to create a safe working environment. If the workplace does not deal with the case satisfactorily, and they are retaliated against or continue to be harassed, they should pursue the matter outside the workplace by laying a formal criminal or civil charge against the perpetrator. 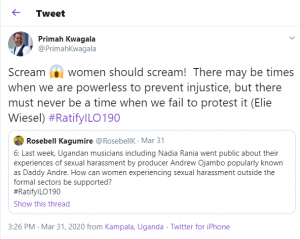 Women in the informal sector are more vulnerable to sexual harassment due to their gender, their insecure working conditions and the fact that they are excluded from protection under the current laws. The participants encouraged women in the informal sector to unionize in order to address issues of sexual harassment as there is power in numbers. They were also advised to seek help from NGOs that specialize in this kind of work and offer these kinds of services like FIDA Uganda and The Women’s Probono Initiative. Participants also discussed the trivialization of sexual harassment and VAW by the media, which sensationalizes such stories by reporting them as “sex scandals” rather than addressing the root causes of gender based violence against women.

One of the participants contributed that the #ILO190 is promising for African women because it is inclusive. It considers both formal and informal sectors in both rural and urban areas and stretches the definition of “world of work” to include places outside the physical work place and harassment done by third parties which African women also face This umbrella includes domestic workers and care givers who are often victims of sexual harassment but are excluded from protection by current laws.

Governments, employers and their organizations, and civil society all have a part to play in transforming the world of work. The first step is ratifying and implementing the ILO Convention 190 on violence and harassment in the world of work.

Soulful Conversations to Strengthen Voice, Collaboration and Collective Engagement on Sexual Harassment in the Informal Economy
Uganda Urged To Live Up To Its Commitment to End Violence against Women in the World of Work
Statement on the Ratification of ILO Convention C 190 on Ending Gender Based Violence in the World of Work