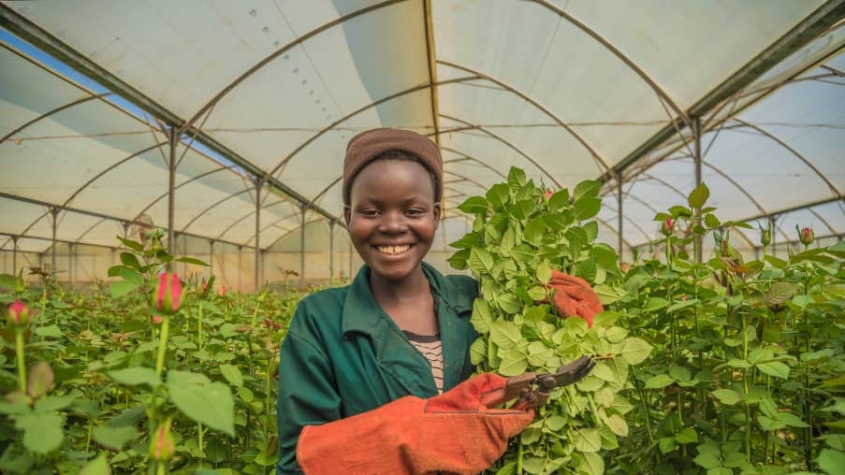 For women working in the informal sector in Africa, maternity protection remains a dream. In a room of 24 women from flower farms in Uganda, more than 90% attested to the fact that they were unaware of their entitlement to maternity leave if they suffered a miscarriage. This is simply one abuse on a long list of insufficient or non-existent maternity protections and benefits experienced by women in the horticultural sector. Not only have a great number of women fallen through the cracks because they do not ‘qualify’ for maternity leave but they have also ended up as neglected additions to the overworked and exploited labour force in the informal sector. Imagine being forced to undergo pregnancy tests to ascertain whether you are fit for employment or not – a procedure that men are not subjected too.

Mindful that women in the informal sector are still inadequately protected and that the cost of maternity leave actually encourages discrimination against women of reproductive age leading to dehumanizing practices against them, Akina Mama wa Afrika in partnership with Hivos East Africa held a discussion at the 63rd Commission on the Status of Women (CSW) to unpack the prevailing context of maternal protection in the horticulture sector in East Africa and to facilitate dialogue on how to promote maternity protection to advance women’s access to equality of opportunity and treatment in the workplace, and promoting gender equality and women’s empowerment. For us, putting an end to the patriarchal attitudes that devalue women’s work is integral to promoting decent work for women. By convening various stakeholders, AMwA sought to contribute to increased public debate and policy influence on how women’s labour participation through acceleration of maternity protection policies and practices during and after pregnancy can be harnessed. Unfortunately, the participation of the women on the flower farms in this conversation was prohibited as they were denied visas.

Nonetheless, their issues were communicated in a capable panel comprising of Hon. Irene Ovonji-Odida, an independent commissioner of the Independent Commission for the Reform of International Corporate Taxation and former Executive Director of the Federation of Women Lawyers in Uganda (FIDA); Mary Kambo, a legal expert at the Kenya Human Rights Commission (KHRC), a partner under the Women@Work campaign and Virginia Munyua, the Hivos East Africa Regional Program Manager for the Women@Work campaign. As if poor pay and susceptibility to sexual harassment and other forms of discrimination are not enough, women on flower farms work as casual workers, which does not entitle them to many benefits including maternity leave. Between poorly planned breastfeeding breaks where mothers have to choose between travelling miles to nurse their babies, which most forfeit because of the distances involved, and having to report to work immediately after a miscarriage, the laws that would uphold women’s rights are the very tools used to discriminate against women.

“Our laws are quiet on some very important issues. Take for instance the issue of child health. When a mother loses a baby, the employer expects the woman to report back to work immediately as the law remains silent on what should happen.” – Mary Kambo

One would think that a society that recognises women’s reproductive role must recognise their productive role and put in place measures to advance women’s effective participation in the workplace. It is inarguable that the lack or presence of maternity protections affects the productivity of women workers. It was unanimous that the voices and demands of women in the horticulture sector must be taken into consideration and these backed by empirical data which provides a more accurate picture of the lived experiences of such women. Some of the key recommendations from the session were ensuring the adoption of progressive gender policies providing for better maternity protection for women workers, policies that advance safe work spaces and in ensuring women ascension to leadership positions where they can influence the policies and their implementation at work places.

“We need to challenge the system. The development model we have is not working in favor of women. What we are dealing with is a power issue that perpetuates the marginalization and exclusion of women,” – Irene Ovonji-Odida