Last month, Akina Mama wa Afrika, a committed Feminist Pan-African Organization nominated me to participate in a high level meeting for the African countries in developing an SRHR thematic barometer for West, East and Southern Africa benchmarked on the Maputo protocol in Lusaka Zambia, a beautiful country in Southern Africa. This was a very exciting short trip which left a spark in my life. I was able to use my voice to address the challenges affecting our country without someone else speaking on my behalf and constantly referring to the Maputo Protocol.

The Maputo protocol also known as the African Charter on Human and People’s Rights on the Rights of Women got its name from Maputo the capital city of Mozambique where it was adopted by the 2nd ordinary session of the Assembly of the Union on 11th July, 2003. It is the only legal instrument which delves more into discriminatory practices and laws against women’s rights and consists 99% of women’s rights. There are only 40 countries which have ratified the protocol with the latest being South Sudan and Ethiopia. In Uganda it was ratified in 2010 with reservations put on article 14 (2C) which calls for the right to safe abortion under certain circumstances.

The day I was informed of the meeting, I was wondering what I would discuss in the round table discussion given it consisted of only 15 members who were expected to discuss about their work, emerging SRHR challenges and policy, legal and developmental contexts used to address such both at national, regional and international levels. This was at short notice that I had to only pack my bags and enjoy my trip while reflecting on what next. My trip started on Tuesday morning with my colleague from Uganda the former honorable Member of Parliament Tezira Jamwa from the sixth parliament. Our flight was really long and we were seated differently which let down my eagerness to ask her various questions. We met in Lusaka at the airport

At Lusaka airport, I met the other participants from FEMNET and Equality Now and we discussed about the political situations in our countries given we were in East Africa and could not forget to discuss about the People power and Hon Kyagulanyi Robert a.k.a Bobi wine. It was a great conversation that we were so free with each other before we returned to our rooms. I was so glad when the executive director of FEMNET said she could not wait to listen to the voices of young people during the meeting which was scheduled for the next day.

During the meeting, I was able to reflect more on the Maputo protocol since we were developing an SRHR barometer which aimed at advancing SRHR for women and girls in East, West and South Africa. The Maputo protocol discriminates all forms of violence on the Sexual Reproductive Health and Rights. This is because it is the only legal instrument which is directly linked to sustainable development goal 5: Gender equality and defines the situation in a country like Uganda where gender inequality is high and only 500 cases of violence have been adjudicated with reference to the protocol. This gives clear insight for the need to publicize its role instead of indiscriminately avoiding it even by the higher structures. It discriminates issues such as harmful cultural practices such as female genital mutilation, child marriage, and unfriendly youth health services, unpaid work, unequal pay, women’s inheritance and all forms of sexual gender based violence. This is an instrument we can break down without leaving it for women but also young people. 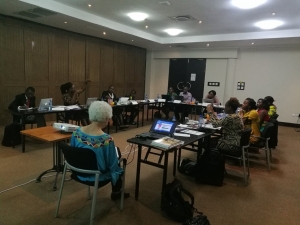 On 11th July Uganda commemorated the 15 anniversary celebrations of the Maputo protocol at Hotel Africana which was hosted by Akina Mama wa Afrika(AMwA) on behalf of Solidarity For African Women’s Rights (SOAWR). It was my second time to discuss about the Maputo protocol and the poor implementation which has so far been carried out in our country. The knowledge and information obtained from this meeting paved way for my discussion during the SRHR barometer group reference meeting. There are so many human rights injustices and violations which the legal instrument condemns, however, we tend to ignore and leave them for only women yet these are issues which consequently affect all of us. My first time to read, discuss and dialogue on the Maputo protocol was at Makerere University in the human rights class in which we studied about the charter and its role to the African states.

These are legal instruments which are to be advanced especially by the young people who are affected. During the SRHR Barometer group reference meeting, we identified female genital mutilation as a major challenge in West Africa and an alarming issue in Nairobi, Kenya where it is alleged of the presence of a certain doctor who influences people to support female genital mutilation with scientific reasons! There is a gap between the health rights and rights’ organizations and there is still a lot of work to do.

To me, the meeting was a learning moment where I personally shared the issues around SRHR affecting our country. I was able to understand that SRHR has cross cutting issues and if we are to mitigate such challenges we must speak with one voice instead of leaving one group to only deal with it referring to its own document.

This does not mean only women rights organizations or youth led organizations are not working hard but we must coordinate and embrace different instruments which act in holding our governments accountable and end such injustices. I was able to find out the tools which are important in advancing our SRHR advocacy such as score cards, barometers since we were actually looking at a thematic SRHR barometer in holding our governments accountable. I think if we are to curb such, we must also strategize and seek for better ways of advocating.

Besides work, I had an opportunity of exploring around Lusaka before my flight which was taking place in the evening. Same as our country, there are street children in the country. I was privileged to meet them and find out some challenges which they face which include rape and defilement and even lack of health services. One had given birth on the streets and no justice was given to her. This is why we young people should not keep quiet; our fellow young ones are challenged. At CBC television station in Zambia, I met journalism students who were so happy to know about advocacy and media.

We cannot wait for lawyers to interpret or even speak for us. We ought to speak out too, the same way I used my voice to address our challenges while in Zambia. 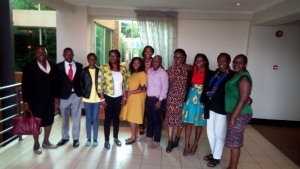 Walking the Feminist Talk: Contributing to the Domestication of the Maputo Protocol In Sierra Leone-Ms.Valerie Tucker
AMwAzons Meet Select Committee On Inquiry into Allegations of Sexual Violence in Institutions of Learning in Uganda, Submit Recommendations For Institutions of Higher Learning
Advancing Girls’ Rights in Tanzania: The AWLI Strengthened My Foundation – Lydia Wilbard