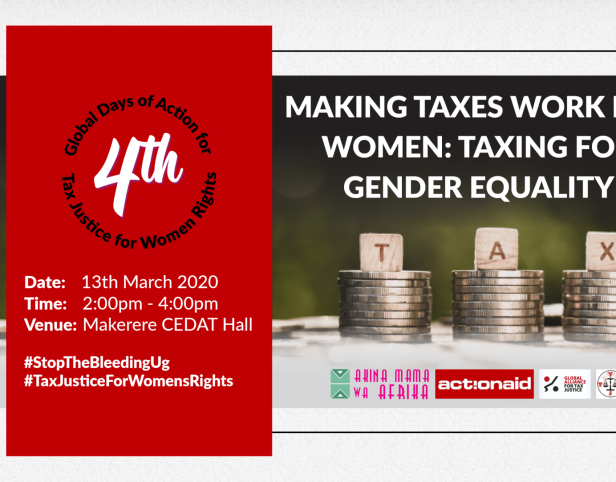 “Why are you making taxation a women issue?” The gentleman in the audience asked after our Feminist and Transformational Leadership Associate, Hazel Birungi’s submission on a panel discussing the role of youth in tax justice with Barbara Kasibante from Uganda Revenue Authority. According to him, the discussion was irrelevant because to the best of his knowledge, a tax is levied on businesses, and therefore we had no business gendering it. In a social world where everything is gendered, this question is unsettling to say the least. Sadly, it is not just the young man that holds the thought that tax and women’s issues have no connection and thus should not see the light of day. It was, therefore, necessary that this conversation was happening.

The Make Taxes Work for Women Global Days of Action campaign is an initiative of the Global Alliance for Tax Justice (GATJ), and it’s regional networks. The days of action aimed at highlighting the tax issues affecting women, encouraging tax justice to be an integral part of struggles for women’s rights; and making tax justice more relevant to ordinary people. The campaign called upon governments to stop illicit financial flows and harmful tax practices, reduce unfair tax burdens on women, remove gender bias and discrimination in tax policies, ensure tax and fiscal policies recognise and serve to represent, reduce and redistribute unpaid care work and to increase the allocation of tax revenues for gender-responsive social services.

Taxation is a women’s issue because women are doubly impacted depending on how tax is raised and used. Governments resort to consumption taxes which are considered  highly regressive to cater for revenue not collected from multinational companies and that which is lost to illicit financial flows. Mainly because these taxes are the low hanging fruits that are easy to gather, such taxes include but are not limited to Value added tax(VAT), Excise duty (think the fee on mobile money, bank withdraw charges and the current Over The Top(OTT) tax). According to the Uganda Revenue Authority, consumption tax made up 39.7% of the tax collected in 2019 – the most significant contribution to the revenue that year. Because women bare the brunt burden of care in homesteads, they purchase and consume more goods and services that cater to health, education and nutrition compared to men, making the burden bigger for them.

Revenue mobilization is one of the 4Rs that make up the major functions of taxation. Governments through taxation collect revenue that funds the provision of public services, social protection, and the realisation of Economic, Social, and Cultural Rights. Due to the unequal distribution of unpaid care work, reproductive health needs, and sexual and gender-based violence, women rely more heavily than men on these services. When governments do not raise enough revenue because of tax leakages and harmful tax incentives, treaties, and illicit financial flows, there are barely any resources allocated towards the provision of these services and its women who endure the results of this. The national budget framework as it stands, indicates a cut in almost all the sectors that provide for social services and protection. We cannot allow this to go on!

It is, therefore, imperative for all citizens to advocate for tax justice for women’s rights. By getting involved in the budgetary processes and consultations on tax policies, actively taking up leadership positions to cause and influence change, and consistently holding governments accountable because there is no taxation without representation.

Where is the money? Why Illicit Financial Flows Are a Violation of Human Rights.
A new frontier on tax justice from a feminist perspective in Uganda
Do HR Managers in the horticultural sector care about gender relations in the workplace? We are making sure they do!