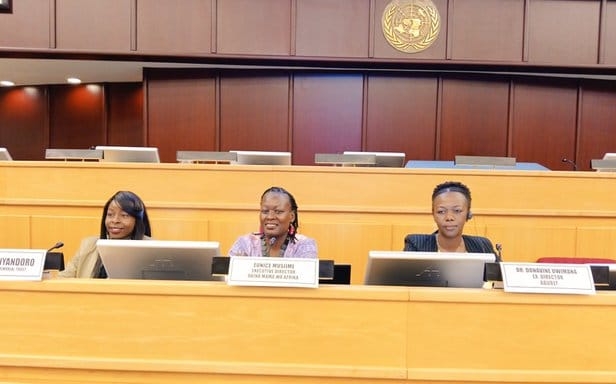 “Since the end of the Cold War, Africa has been a theatre of conflict,” noted speaker after speaker at the recently concluded Gender Is My Agenda Campaign (GIMAC) 35th pre-summit CSOs Consultative meeting. Africa is rife with instability, with women and children accounting for the vast majority of those adversely affected by conflict. Whereas landmark instruments such as the UN Security Council Resolution 1325, Maputo Protocol and Beijing Platform for Action call for the protection of the rights of women and girls during and after conflicts, sexual violence remains part of the spoils of war with 45.6% of African women having experienced some form of Gender Based Violence (GBV) as a result of armed conflict. Akina Mama wa Afrika’s Executive Director, Eunice Musiime, joined over 200 delegates from more than 20 countries, representing the African Union, United Nations officials, diplomatic missions, development partners, CSOs, the private sector and interested groups to discuss the role of women in advancing the AU agenda of silencing the guns by 2020.

Statistics alone have failed to illustrate the full impact of acts of violence against women and girls on their lives. Once the headlines fade, women and girls continue to endure unresolved and untreated traumas as a result of community stigma associated with sexual violence, worsened by limited social support systems and services. Further, reconstruction efforts have often overlooked the multiple dimensions of the impact of sexual violence, which directly affects post-conflict recovery efforts. Peace processes have been left in the hands of military men or warlords whose expertise is war and as such, the special needs of women and girls during resettlement and rehabilitation are ignored. Therefore, women continue to be raped and suffer numerous post-trauma stress disorders even after ceasefires have been executed. To break the silence on sexual violence in the aftermath of war, Akina Mama wa Afrika held a panel discussion at GIMAC which sought to interrogate stakeholders’ response to combating sexual violence in every element of peace building. The session also aimed at harvesting recommendations for ending violence against women in post-conflict settings. 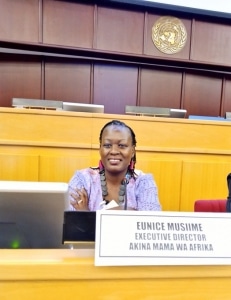 Silencing the guns does not mean silencing the pain of survivors. Women have a voice. We need to collectively amplify that voice and break the silence around sexual violence – Eunice Musiime

The conversation to interrogate silence on sexual violence in the aftermath of war commenced with a viewing of a documentary produced by Akina Mama wa Afrika in partnership with Amplify Change where women shared their experiences of sexual violence in war. The causes, dimensions, and impact of sexual violence, as well as strategies that can be employed to confront the silence around sexual violence were highlighted which provided a perfect segue way into the discussion featuring Dr. Donavine Uwimana, Executive Director of Association Burundaise pour le Bien-Etre Familial (ABUBEF); and Nicey Nyandoro of the Rozaria Memorial Trust. Panelists stressed the importance of confronting political, economic, social and cultural realities and drivers of violence to prevent sexual violence against women. The conversation also called for reparations for victims and survivors of sexual violence, urging that these must be incorporated in the peace negotiations and implementation in the post-conflict and reconstruction phase.  It was further noted that survivors of sexual violence continue to miss out on development outcomes like access to education, health and economic empowerment. 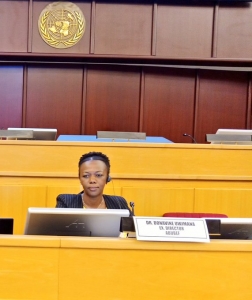 Many African countries have criminalized abortion yet many women and girls raped during conflict carry unwanted pregnancies that make them a subject of stigma. Survivors are often excluded as a result of mothering children born out of rape. – Dr. Donavine Uwimana

The 35th GIMAC pre-summit was a reflective space for stakeholders to review and consolidate a common position on the effectiveness and efficiency of the AU and member states in mainstreaming gender equality in silencing the guns in Africa. Participants observed that while important initiatives have been put in place to mainstream gender in silencing the guns, many women and girls still face barriers to the realization of their basic rights and aspirations. Some of the key recommendations at the Summit were for the African Union to establish a Working Group on Silencing the Guns to monitor progress on AU Summit themes, for the AU to prioritize and institutionalize conflict prevention, for African governments to silence the guns by actively preventing conflicts and creating functional mechanisms for peaceful resolution of conflicts at all levels. Participants also urged the AU to support member states in adopting, revising and implementing National Action Plans on UNSCR1325 and implement the Maputo Protocol in conjunction with CEDAW and other regional and international instruments on women’s rights.

It is important to reflect on the challenges faced by survivors of sexual violence in conflict. The consequences of sexual abuse such as trauma, depression, sexually transmitted diseases and stigma continue to undermine survivors’ ability to heal. Those who manage to heal have to endure an additional challenge of accessing mental health services that are poorly developed in most of the African countries. Countries must strengthen economic opportunities for women through economic empowerment programs and engendered reparation to support survivors’ independence. – Nicey Nyandoro

16 Days of Activism. The Tide is Turning: Take a Stand Against Rape and Sexual Assault
Creating Safe Spaces to Break the Silence on Violence for Differently Abled Women in Uganda
Standing In Solidarity With Sisters Who Have Experienced Sexual Violence