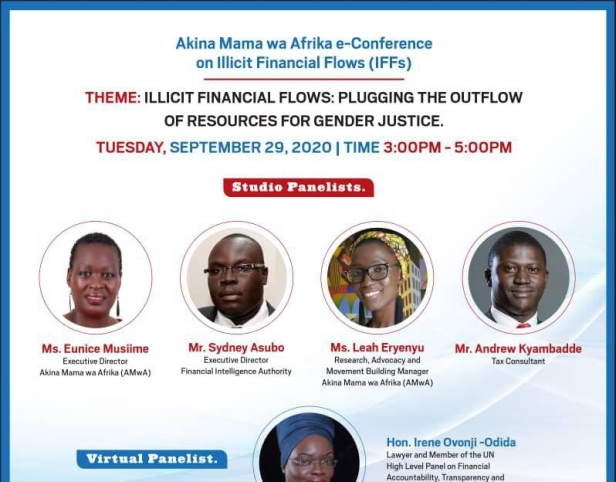 In a groundbreaking report released in 2015, the Mbeki High Level Panel revealed that Africa loses about US$50 billion annually in Illicit Financial Flows (IFFs), an amount less than the Official Development Assistance Africa collectively receives as a continent. The 2018 United Nations Economic Commission for Africa (UNECA) study on the global governance architecture for combating IFFs further built evidence estimating that Africa loses upwards of $100 billion per year.

Under the auspices of the “Curbing IFFs for Women’s Economic Empowerment” project funded by Urgent Action Fund-Africa, we have been in the vanguard of amplifying discourse on how IFFs disenfranchise women and frustrate the achievement of gender justice. In the same vein, we convened  an e-conference on NTV-Uganda, on 29th September, 2020 to facilitate the public’s understanding of IFFs and their social and gendered impacts, and to catalyze demands for accountability to stop the loss of resources critical for achieving development outcomes particularly for gender justice.

The panel comprised of Leah Eryenyu, AMwA’s Research Advocacy and Movement Building Manager, Sydney Asubo, the Executive Director of the Financial Intelligence Authority and Andrew Kyambade a Tax Consultant, with Irene Ovonji-Odida, a Lawyer and Member of the Financial Accountability Transparency and Integrity Panel joining in virtually.

In her opening remarks, Eunice Musiime, AMwA’s Executive Director stressed the importance of the conversation noting that macroeconomic policy conversations have always excluded women, and yet women’s participation was critical because they are disproportionately impacted by the decisions made.“We recognize that macroeconomic policies are not gender neutral so we hold these conversations to debate the choices actors in these spaces are making,” she said.

The panel discussion highlighted what IFFs are; the movement of money from one country to another that is illegally earned, illegally used and illegally transferred,  and the complexity of  naming and identifying some of the IFFs practices that may not be conventionally illegal.
“We call them illicit not because they are illegal but because they are immoral and unethical. It means they are benefiting but not paying their fair share,” she said, delving into the ways IFFs manifest.

Insights from the conversation also revealed that most IFFs are a result of commercial tax abuse by multinational corporations that are facilitated by the global  financial architecture which has redefined trade to be borderless and made it possible to obscure information from tax authorities.
Leah noted that “taxation is a political issue. Our tax systems are not necessarily independent or work in a vacuum. As long as you have an enabling environment which these tax havens enjoy, then tax evasion will not stop,” she said

Hon. Ovonji-Ondida, who was a member of the Mbeki High Level panel illustrated how institutions and individuals contribute to the loss of resources through IFFs. She named banks as being chief enablers as well as professionals including corporate lawyers, accountants and auditors who facilitate the transfer of IFFs from their countries of origin by advising on how best to take advantage of the gaps in the legislation like tax codes, international accountancy regulations and misalignment between the rules of different countries.

She explained that while it is true that taxation is a sovereign right, issues to do with tax, trade and investment are not solely controlled at the national level therefore the problem of IFFs is a responsibility that must be tackled at national, regional and international levels.

The panelists challenged the idea that the responsibility to tackle the permissive legal frameworks lay with national governments alone, stressing the power imbalances that play out at the negotiation table, and the fact that the legal system on tax was designed in response to global policies, that are decided by wealthier countries. They also challenged the submission that tax havens where most multinational corporations and high networth individuals were small island nations that set up secrecy jurisdictions as they had no other way to generate income for survival. It was shared that the biggest tax havens including Switzerland and Luxembourg are in the Global North.

Every time there is a shrinkage in revenue collection, social services like health, education and public transport from which women benefit the most, are cut. IFFs impact negatively on the economic development of countries leading to unemployment which hits women harder than men and makes them more likely to accept lower quality and lower wage jobs.

In her closing remarks, Ms. Eryenyu underlined the importance of applying a gender lens in budgeting processes to ensure equitable distribution of resources that tackle the unique needs of girls and women. She called on governments to support the establishment of an inclusive intergovernmental United Nations global taxation body that will give lower income countries a chance to sit at the table as equals.
Hon. Ovonji-Ondida reiterated this, recommending that the African Union coordinate its members for collective action to build their influence in the negotiation space for taxing rights and more inclusive policies.

“We need to interrogate our own development framework that is anchored in capitalism and enriches certain categories of people.” Ms. Musiime said in her closing remarks, reminding all to  play their part in advocating for the creation of mechanisms, practices and methodologies that ensure we retain Africa’s resources for Africa’s own development.

16 Days of Activism Against Gender Based Violence