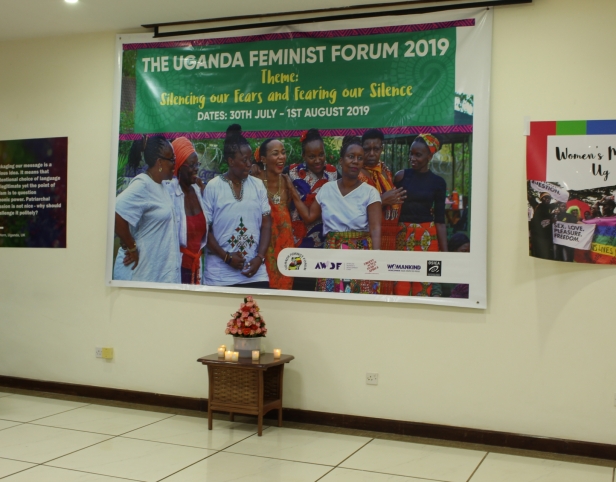 The theme of this year’s Uganda Feminist Forum (UFF) was “Silencing Our Fears and Fearing Our Silence”. One I hadn’t easily understood until I started interacting with it through the preparations for the forum and the buildup tweet chats.

There is something about being in womxn only spaces that is so calming. The room was diverse, various personalities which all together created a magnificent powerful energy. From the morning hugs to the lunch and dinner conversations. All avenues for collecting and casting more spells. We are witches and we are proud.

“Do you believe that womxn are considered inferior in society? Do you believe that we need to change both the narrative and structures that support discrimination and exploitation? Are you doing anything to make sure the status quo is changed? If your answer to all the above is yes then you are a feminist.” These were Professor Sylvia Tamale’s reaffirmations to each one of us in the room that had expressed the fear of not being feminist enough.

We were further strengthened by the legendary Hope Chigudu (everyone needs a Hope in their lives) who didn’t tire reminding us that feminism is a journey. The unlearning and relearning never stops

When Christians go to church, they read the bible, the Muslims read the Quran when at the mosque. We African feminists read the Charter of Feminist Principles for African Feminists. In the great words of Professor Sylvia, practicing feminism without theory is like walking in the dark. Reading and internalizing the Charter was a great session for me. It’s not just because I was paired with Maria Alesi who took time to explain to me some concepts I didn’t know but also because I got to internalize the personal ethics and why it is important to name myself as a feminist.

My favorite session was that of “Silence in the Economy”. I am passionate about womxn and tax justice so imagine the excitement when I saw this on the program. From Anita Ntale’s absurd but not shocking findings about the status of womxn in the economy that revealed that womxn are paid as half as their male counterparts especially in the private sector, womxn missing in critical spaces to Leah Eryenyu’s explanation of how tax is crucial for womxn to have access to social securities and the impact of Illicit Financial Flows (IFFs) to womxn. We lose to about 2 trillion UGX to IFFs a year. This can fund our health budget.

The shock in the room when Ritah Aciro quantifies unpaid care work and showed results of who was affected the most? Say it out loud with me, WOMXN!!

You are probably thinking, oooh another workshop, mainstream higihaga, noooo, we explored both the practical and theory. From Janepher Nassali discussing her work with womxn at flower farms to Macklean Kyomya who powerfully shared her journey working with womxn sex workers to Joyce Nangobi Rosemary of Slum Womxn Initiative for Development, a womxn led organization that is constructing and ensuring access and ownership of land by womxn. Rose Kigere who with her team of 6 have been able to organize and construct a womxn and children shelter for gender based violence survivors. The shelter will be a one stop center that will provide skills trainings (the team bakes, we are told that the most of the money used to set up the shelter came from the baking that the womxn do), meditation facilities, legal aid and counselling services. So you all that keep calling us arm chair feminists saying that feminists don’t do grassroots work should may be look better next time. *Flips Hair

UFF2019 more than anything proved to me that there is nothing like womxn friendship and sisterhood. I am definitely immersing myself in feminist theory and I will write more. Also, I vowed to make friends with Maria Alesi, Tina Owengeye and Hope Chigudu.

Please allow me reintroduce myself. MY NAME IS HAZEL BIRUNGI AND I AM A FEMINIST. 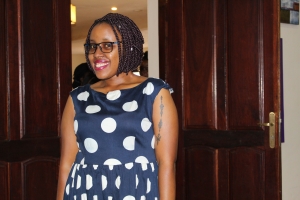 Building a Community of Sisterhood with the Uganda Feminist Forum
#MeToo?: Building a movement to end impunity on sexual gender based violence in Uganda