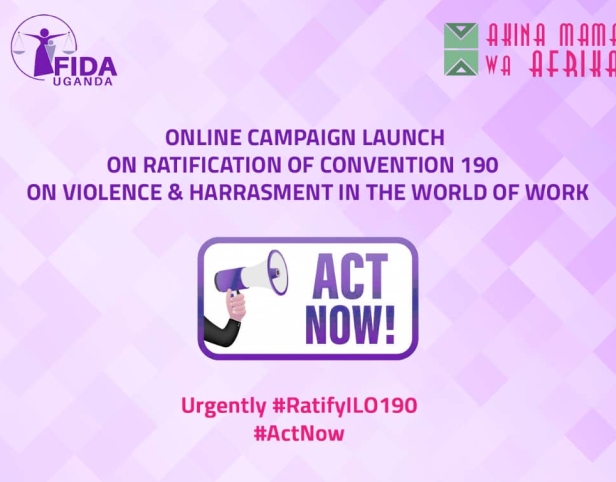 As Uganda joined the rest of the world to commemorate International Workers’ day on 1st May, We at Akina Mama Wa Afrika (AMwA) and FIDA Uganda reflected on the terrifying violence and harassment experienced by women in their different workplaces.

Violence and harassment against women in the workplace remains a major human rights concern in Uganda and worldwide. International human rights law makes clear that sexual violence is a human rights violation, and that it is a barrier to realizing the full range of women’s human rights. In the aftermath of the #MeToo movement, employers are, more than ever, acutely aware of the global risks posed by sexual harassment. These include individual and corporate reputational damage, the risk of litigation, vicarious liability (in some legal systems) and criminal proceedings, as well as a negative impact on staff productivity, recruitment and retention.

Despite the different acknowledgments within international law and practice in some countries, the continued widespread prevalence of sexual violence can be situated as a systemic failure of governments and societies to honor their legal and moral commitments to women’s human rights. The high rates of violence are enabled by cultural and societal attitudes that justify different forms of discrimination against women, which include violence, and the lack of monitoring or punishment.

Sexual violence manifests in different spaces, including in the workplace, such violence limits women’s ability to fully achieve other rights for example impeding their political participation, their right to decent work, and their right to privacy. This should translate into an urgent call that all governments honor their commitments and work to guarantee that all women are able to experience a workplace free from gender-based violence but this has not been the case.

In a research by AMwA , even in institutions where policies, regulations and/or mechanisms exist to address sexual harassment , the practice persists, largely because it is seen as normal by both men and women; and it is accepted that responsibility of ‘dealing with it’ lies with the woman. This trivializes the experiences and profound harm caused by sexual harassment and violence in the workplaces and is dismissive of women’s demands for equality.

Sexual violence in the work place has drawn a lot of controversy by the many different perceptions and definitions that have characterized it. The controversy is worsened by the fact that discussions on the topic have mostly been done in a western industrial setting; giving it a central view that it is a problem of affluence, hence specific to western societies. Despite this controversy, sexual harassment at the workplace has been clearly identified as a violation that bears heavily on the human rights of an individual. It is a sex discrimination issue that affects everyone, and especially the vulnerable in society.

Currently, sexual harassment at work has now taken new forms in the virtual workplace. Online harassment has grown since the Covid-19 pandemic. Many employees are currently working from home and the upturn in sexual misconduct has been closely linked to increased use of messaging Apps, video platforms, personal devices and a more casual tone that often comes from working from home. This goes to confirm the fact that sexual harassment roots extend deep, from work’s lowest echelons to its highest; and wide, as in globally, to varying degrees in varying countries and regions.

While we recognize the fact that exposure and discussion of sexual violence have gained a lot of prominence among International organisations, National, regional and international NGOs and Governments, the discussions on sexual violence on and among the Informal workers have not been as extensive. These workers remain marginalized. The informal economy is heterogeneous and is made up of different sectors, with different statuses in employment and different workplaces (i.e. streets vendors, construction sites, markets, flower farms, plantations, and domestic workers). These workers are at the greatest risk of sexual harassment and violence in the workplace, yet have the least support and least access to redress.

The International Labor Organisation (ILO) Convention 190 (C190) on Violence and Harassment, adopted on 21st June 2019, has been lauded as a landmark and historic treaty that ushered in a fresh set of protections for workers and established global standards to end gender-based violence and harassment in the world of work. The legal instrument, further supplemented by Recommendation 206 are can advance the fight to curb violence against women because they seek to address the root causes of gender-based violence and give various guidelines to different stakeholders, including employers and governments. The instrument, which if ratified by countries would be legally-binding, has a specific focus on gender-based violence and harassment in the world of work.

Uganda specifically welcomed the convention and was seen as one of the first countries to declare its commitment to domesticate and implement the aspirations of the framework. It is upon this background that we launch our campaign on #RatifyILO190  #ActNow  and call upon: