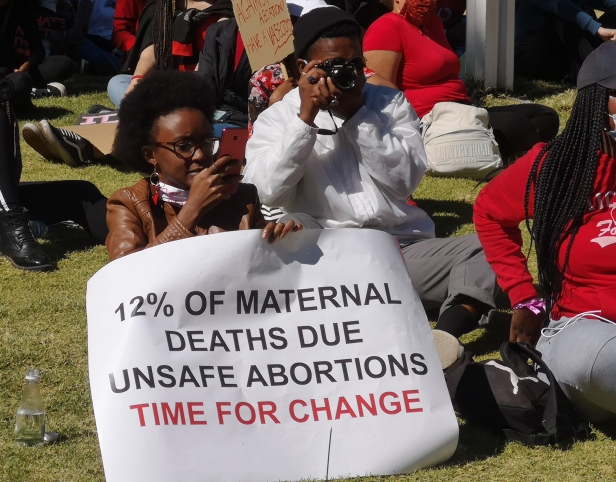 Every year on September 28, activists around the world commemorate International Safe Abortion Day by conducting various activities like mobilising constituencies and critical stakeholders to take action to call for the realisation of access to safe and legal abortion for all. This year’s theme is ‘Abortion in Uncertain Times, and at AMwA, we recognise the growing fundamentalism and restrictive laws on safe abortion in Africa puts pregnant people that seek safe abortion in nonautonomous existence. Our ambition of rights-centred advocacy on safe and legal abortion in Africa is currently advanced through the Make Way programme. Our convictions are firmly aligned with the programmes’ vision of mainstreaming and operationalising the concept of intersectionality in SRHR so all people especially marginalised groups, can enjoy their full SRHR.

At AMwA, we are conscious of the context of the current situation, especially in Africa, where 43 of the 54 countries continue to criminalise abortion while some moderately allow it only when the mother’s life is at risk. Unfortunately, these restrictions have not reduced the incidence of abortion. Instead, abortion has become less safe. The World Health Organization (WHO) confirms that the legal status of abortion does not correlate to the number of induced abortions, as women will seek abortion regardless of its legal status and availability, and little wonder that the number of deaths from unsafe abortions, stands at 185 deaths for every 100,000 abortions in Africa.

Women, girls, and gender-expansive persons are continuously denied access to safe procedures and forced to use unsafe methods, putting their lives at risk with complications ranging from moderate to life-threatening and even death. Statistically, according to the Guttmacher Institute (2020), more than 77% of abortions in Africa annually are unsafe, making Africa the continent with the highest estimated proportion of unsafe abortions worldwide because of legal restrictions and stigma. Moreso, poorer, marginalised young women, gender-expansive persons, and adolescent girls bear the heaviest burden due to the denial of their right to choose. And they are forced to have more children than they can afford- a danger to their health and putting them at risk of greater poverty.

AMwA recognises the progressive strides in realising safe and legal abortion in countries like Benin, which recognises the importance of abortion access for various reasons, including continuing education and protecting mental health. In the last few years, feminist movements have pushed governments to make massive legislative reforms in their relentless fight for reproductive justice. In addition, young feminists and LGBTQIA+ activists have been at the centre of movements in Ireland and Latin America. The sweeping Green Wave movement has pushed for change and historic victories in Argentina, Colombia, and Mexico.

However, despite decades of campaigns around the world for the right to safe abortion, the continuing criminalisation of abortion coupled with patriarchal ideologies deeply entrenched in negative societal attitudes and norms reinforced by religious and political leaders continue to shape policies concerning contraception, abortion, and sex education. This impedes the realisation of the bodily Autonomy of women, girls, and gender-expansive persons. Additionally, the ripple effect caused by the U.S Supreme Court’s decision to reverse Roe V Wade in June this year upheld the longstanding Constitutional right that protected a woman’s right to obtain an abortion safely and legally. However, its reversal has slowed down efforts to liberalise abortion, especially in Africa. For example, we are witnessing the backlash SRHR advocacy is experiencing through opposition against the East African Community- Sexual and Reproductive Health (EAC- SRH) Bill. The Bill seeks to facilitate the attainment of SRHR for all persons, provide for the progressive realisation of integrated sexual and reproductive health information and services as part of the universal health coverage of each Partner State, and to prohibit harmful practices from the Community. Also, Clause 6 of the Bill recognises SRHR services to include access to permitted, safe and effective termination of pregnancy services, including post-abortion care.

Furthermore, the lack of access to safe and legal abortion continues to violate international human rights law in numerous ways – starting with the overarching right to life and health, stipulated in the 2003 Protocol to the African Charter on Human and Peoples Rights on the Rights of Women in Africa commonly known as the Maputo Protocol. The Maputo Protocol obligates State parties to realise women’s and girls’ right to life, based on equality and non-discrimination, considering the risks to their lives they face related to reproduction and gender. Article 2 requires State Parties to prohibit all forms of discrimination and harmful practices that endanger women’s health and general well-being. Article 14 (1) requires States Parties to ensure that women’s right to health, including sexual and reproductive health, is respected and promoted. It entails the right to control their fertility and to decide whether to have children, the number of children and the spacing of children. Furthermore, Article 14(2) (c) protects women’s reproductive rights by authorising medical abortion in cases of sexual assault, rape, incest, and where the continued pregnancy endangers the mental and physical health of the mother or the fetus.

AMwA recognises that fighting for women’s, girls’, and gender-expansive persons’ rights is deeply political, and patriarchal fascist governments can no longer control our bodies and liberation.

Our Call to African Governments and parliamentarians