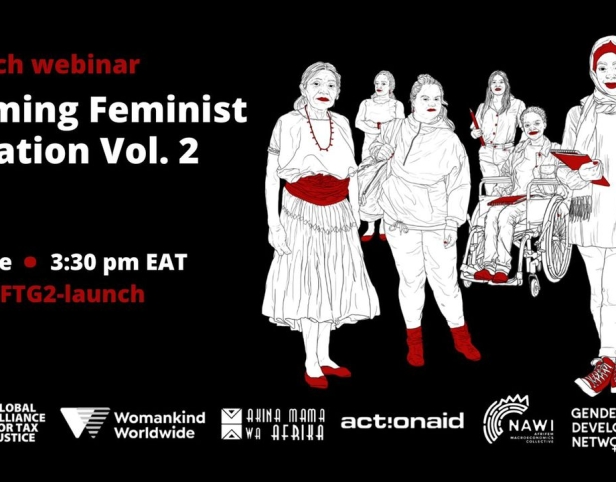 The Global Alliance for Tax Justice (GATJ)’s Tax and Gender Working Group, together with ActionAid International, Akina Mama wa Afrika and Womankind Worldwide, launched today Framing Feminist Taxation vol. 2: Issues and tools for analysis and capacity building – a case study of Uganda. The new volume of the guide presents tools to assess the gender bias in the current tax system and best practices to advocate for a feminist tax system that upholds human rights and enables substantive gender equality.

Using Uganda as a case study, the publication was developed to support individuals, civil society organizations, and practitioners working in tax justice and gender equality to assess their own countries’ tax systems. It takes the readers through different exercises aiming to enable them to develop their own analysis and advocacy strategy for tax justice and gender equality. It also presents three main frameworks that provide gender equality and human rights lens and could be used in the analysis and formulation of tax policies: the OPERA human rights framework; the Fair Tax Monitor; and the Grown conceptual framework for tax and gender analysis.

“Taxes affect everyone differently depending on class, gender, and position in society. While tax policies are supposedly neutral, human circumstances are not, because, under current inequitable policies and disparities in collection approaches, the one with less ends up paying disproportionately more. It is women – who are more likely to be unemployed, underpaid, or spend money on consumption to support their families – consequently, end up being affected harder by these tax and fiscal policies”, highlighted Caroline Othim, Global Policy Advocacy and Campaigns Coordinator at GATJ and one of the authors of the publication.

She continued: “This guide is quite timely, as it comes at a moment when governments need to ensure inclusive recovery from the pandemic. And for a recovery that is equitable and just, a transformative change is needed, one that rejects the ‘old normal’ in favor of an economy centered on well-being and care. Thus, the publication highlights the call by civil society for the adoption of feminist alternatives to the existing orthodox economic structures, which are rooted in neoliberal ideology, while the present realities call for a rights-based solution to the challenges in global and domestic taxation”.

In-depth: What is in the guide?

It demonstrates how a feminist analysis of economic models and tax systems is essential for the realization of women’s human rights. It provides an overview that demonstrates how taxes and tax policy tend to disadvantage women who already face multiple intersecting inequalities. The chapter elaborates how illicit financial flows (IFFs) undermine government revenue and policies and demonstrates the need for a feminist care-focused post-pandemic recovery. It elaborates on issues such as care and tax justice, regressive tax systems, women in the informal economy, the gender dimensions of tax justice in the extractives sector, and the climate crisis and its impact on women, concluding with a focus on the positive impact of women workers in the Uganda Revenue Authority. It recommends group exercises to enable readers to develop their own analysis and advocacy strategy for tax justice and gender equality.

It describes two tax systems – a progressive and a regressive tax system. Using Uganda as a case study, the chapter elaborates on different kinds of taxes with a focus on what are direct and indirect taxes. These taxes are described in detail as well as their implications on different populations of women and men. It includes an extensive illustration of VAT taxes in Uganda and their gender implications. Two group exercises in this chapter assist the readers to understand tax policy and the tax system in their own countries and the role of tax in macroeconomics. The exercises challenge readers to understand the different taxes in their countries and their implications for gender inequality.

It presents three gender equality and human rights analytical frameworks that the readers can learn from and use in their countries to do a human rights and gender equality analysis of tax and tax policy. The analysis aims to enable readers to understand the issues implicated in the (lack of) collection of disaggregated data and to challenge and advocate for intersectional gender equality and tax justice in their countries. The first analytical framework enables you to monitor human rights and their violations using OPERA, a tool developed by the Centre for Economic and Social Rights (CESR). The second framework is the Caren Grown Conceptual Framework for the realization of gender justice in tax. This framework was used in eight countries to demonstrate tax injustice and the reforms needed in tax policy in recognition of women’s work in the informal and formal economies, women’s unpaid care work, and gender differences in consumption expenditures, property rights, and asset ownership. The third gender analysis framework is the Fair Tax Monitor (FTM). The FTM is a unique evidence-based research and advocacy tool that identifies the main bottlenecks within tax systems and provides strong evidence for advocacy work at the national and international levels. Using the example of Uganda with additional gender-specific questions in the FTM, a new and detailed FTM report from Uganda is presented to demonstrate that a detailed gender analysis of tax is possible using this methodology.

Uganda has a long and rich history of feminist economists, women’s rights and feminist groups, civil society organizations, and research centers involved in research and mobilization for tax justice. These groups have focused on revenue generation as well as equality enabling measures on the expenditure side, with their decades-long organizing for gender-responsive budgeting. The chapter demonstrates the multiple ways that women’s lives are linked to taxes and public services and briefly profiles the work of the Forum for Women in Democracy (FOWODE), in Uganda. It then takes the 2010 case study of Uganda undertaken using Grown’s Conceptual Framework and it juxtaposes the gender analysis of taxes with the situation today.

The publication reiterates the demands and recommendations of the GATJ’s Tax and Gender Working Group to governments and multilateral institutions to make taxes work for women:

About the Global Alliance for Tax Justice

Established in 2016, the Tax and Gender Working Group is a space for the Global Alliance for Tax Justice’s members and committed partners to engage directly in campaigns and policy work on tax and gender. It aims to strengthen the global integration of tax and gender justice movements and has been broadening participation by working closely with women’s rights organisations, global trade unions, academics, NGOs and CSOs. Currently co-chaired by GATJ, ChristianAid and Seatini, the working group co-organises with GATJ’s regional networks the annual campaign Tax Justice for Women’s Rights.

Akina Mama wa Afrika (AMwA) is a feminist Pan-African leadership development organization with headquarters in Kampala, Uganda. Our work is rooted in feminist principles and beliefs guided by the Charter of Feminist Principles for African Feminists which defines our leadership development program and movement-building activities. We envision a world in which African women are politically, economically, and socially autonomous and are champions of change in their lives and society. Our thematic areas of focus include; Women’s Political Leadership, Sexual and Reproductive Health and Rights, and Economic Justice and Climate Action. The organization’s work is advanced through feminist and transformational leadership development, feminist research and knowledge building, and policy influence and movement building. AMwA provides strategic direction in key Pan-African networks including NGO CSW Africa, Solidarity for African Women’s Rights, and the Gender Is My Agenda Campaign. AMwA also has consultative status with the United Nations Economic and Social Council.

Womankind Worldwide is a global women’s rights organisation working in solidarity and equal partnership with women’s rights organisations and movements to transform the lives of women. Our vision is of a just world where the rights of all women are respected, valued and realised. Womankind supports women’s movements to strengthen and grow by providing a range of tools, including technical support, communications, connectivity and shared learning, joint advocacy and fundraising.

ActionAid is a global federation working for a world free from poverty and injustice. We have a particular focus on women’s rights. We want to see a just, fair and sustainable world, in which everybody enjoys the right to a life of dignity, and freedom from poverty and oppression. So we work to achieve social justice and gender equality, and to eradicate poverty. Together with people living in poverty and exclusion, civil society organisations, social movements and supporters, we deliver grassroots programmes, provide emergency relief and campaign for things such as women’s economic rights, tax justice and climate justice. Our work falls into four broad areas: women, politics and economics, land and climate, and emergencies.