Akina Mama wa Afrika (AMwA), under the auspices of the Voices for Just Climate Action Programme convened a feminist leadership development fellowship as part of her flagship programme, the African Women’s Leadership Institute (AWLI). The fellowship sought to raise awareness of a feminist intersectional approach to climate action to develop a critical mass of feminist and transformational leaders who will challenge and transform power relations to create sustainable change for women, girls and gender expansive persons in Africa.

The opening ceremony was held virtually on Monday, 4th October, 2021, led by Stella Agara Adhiambo who is the Economic Justice and Climate Action Programme Lead at Akina Mama wa Afrika, during which the participants took the opportunity to express their expectations for the leadership training, which rotated around learning about climate change from a feminist perspective and forming a lasting and fruitful sisterhood and solidarity.During the ceremony, Dr. Thandiwe Chikomo (Director, Voices for Just Climate Action Alliance) spoke to the 18 newly admitted fellows about the Voices for Just Climate Action Programme which focuses on creating just societies and including marginalized and minoritized groups in participating in society.

The fellows experienced a blended learning approach which combined group live sessions on Zoom and self-learning tools such as videos, audio recordings, text resources, links, quizzes and assignments. The training was held twice a week from 5th October to 28th October, 2021, and came to a crescendo on 9th December, 2021, with the awarding of certificates to the participants during a ceremony held virtually to mark the successful conclusion of the training segment of the programme.

In order to help the participants understand personal development as a concept and its link to feminist leadership, the first module was facilitated by Rudo Chigudu. Rudo is an African feminist, activist-scholar and artist fiercely committed to social justice and community self-determination. During her sessions, the participants began to examine gender roles and gender justice, and the deep-seated societal conditioning which predetermines women’s place as second class citizens of the world. They discussed making three/five year plans and the importance of setting goals, dreaming big beyond hetero-patriarchal standards of what is “valuable” and “productive” and also the significance of a wellness plan.

The participants also developed their critical thinking skills for the application of feminist theory in order to understand the climate crisis through a feminist lens. This was done through a thought-provoking module on Feminist Theory led by Twasiima Bigirwa. Twasiima is a feminist lawyer and organizer from Uganda working to articulate the multiplicities of identities by teaching, writing and advocating for change in small and big ways. During the sessions, they discussed feminism as a political ideology/political praxis which acknowledges systemic inequalities which manifest gendered and non-gendered oppressions. Twasiima also highlighted the fact that feminism also includes the radical idea that these structures can be transformed. This discussion deepened the participants’ understanding of principles of intersectionality as a cornerstone to a feminist approach to climate action and was an important precursor to understanding the climate crisis through a feminist lens and situating their feminism in Africa/the African context.

The third module of this training was facilitated by Dr. Syeda Re’em Hussain, whose objective was for the fellows to understand and discuss human and women’s rights and their link to attaining feminist goals and climate justice.This led to an inquiry into the historical moment when indigenous communities were oppressed, colonized, their environments destroyed, knowledge and land taken away. In closing, the she highlighted the dominance of white middle class women in eco-feminist discourse, and the importance of representation. Dr. Syeda is an International Relations scholar who is passionate about bridging the gap between the Academy and policy spaces.

Chipo Bangira walked the participants through the meaning of transformational leadership and how to grow their own leadership. Bangira introduced the topic of feminist leadership and its capacity to produce transformative justice because it challenges the status quo and centers marginalized and minoritized groups. The participants were able to describe what feminist leadership looks like, and the principles that make up this approach to leadership. They described it as radical, inclusive, rehabilitative, and conscious of privilege and power, to mention but a few. Chipo is dedicated to nurturing networks of solidarity for women and youth leaders advancing for a feminist society.

Finally, the participants were taken through movement building and feminist climate advocacy by Felogene Anumo. The objective of this module was to enable the participants understand and contextualize the prevailing issues of climate change in Africa in order for them to think through their advocacy plans. This module laid the groundwork for the facilitator to explain the key ingredients of feminist advocacy such as tackling the structural causes of inequality, recognizing that advocacy is political, and working in an alliance. Felogene went further and reminded the participants that feminism also being a political ideology means that political strategies are fundamental in feminist organizing, and hence the need to occupy these spaces as much as possible. Felogene is a pan-African feminist activist who is passionate about using her creativity, politics and intellect to strengthen feminist movements to build collective power.

Under the theme, The Unveiling of Leaders Event, the official closing ceremony of this year’s fellowship was moderated by Joanita Najjuko – Economic Justice and Climate Action Programme Associate, to celebrate and reflect on the journey they had all been on, the connections made and also to lay the groundwork into the next phase of the leadership development journey. Majority of the participants spoke about the diversity of participants which showed promise of global networking of African feminists from the continent and in the diaspora. Others remarked on the realization that women’s oppression extends to every sphere, including climate change, as long as the systems remain the same. The participants also had the opportunity to present their community action project proposals, and it was interesting to note that the majority of them had chosen to collaborate with each other on their projects. This showed that despite the training being solely virtual, the participants had still been able to bond with each other and build, hopefully, lasting sisterhood and solidarity, which one of the objectives of the fellowship was. 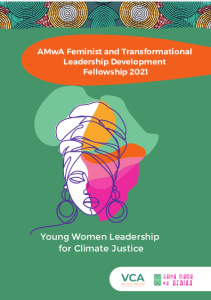