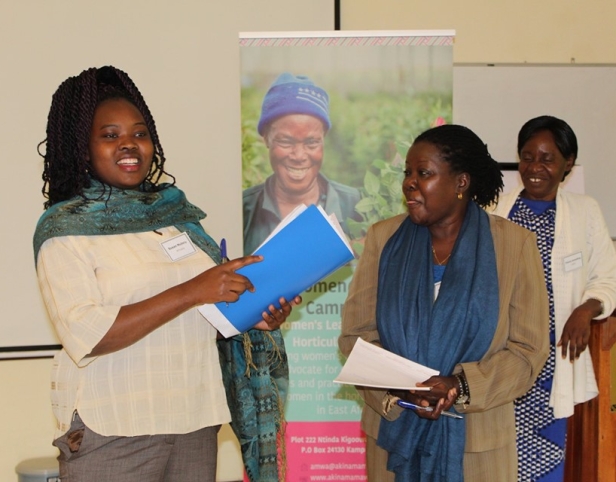 The Women@Work campaign supported by Hivos has been running for a few years now. The task of the campaign is clear, but not simple; achieve decent work for women working in global value chains in the horticulture sector most notably flowers, fruits and vegetables grown for export. The campaign works on a myriad of issues to ensure that women’s labour is recognised, valued and dignified, and that practices in the sector are transformed to be responsive to the unique needs and experiences of women. Some of the issues include, wage fairness, safe working conditions, women’s participation in decision making, and equality and non-discrimination, among others.

From 16th to 18th September, Akina Mama wa Afrika, in partnership with FEMNET, Uganda Workers’ Education Association, Rwanda Women’s Network and Workers’ Rights Watch, convened a reflection meeting for HR Managers in the horticultural sector to create space for sharing, peer learning and accountability in order to catalyse the adoption of gender sensitive policies and practices on flower farms for decent work for women. The convening brought together 14 managers from Uganda, Kenya and Rwanda as well as 6 partners of the Women@Work campaign.

Over the 3 days, the reflection allowed managers to revisit commitments they had made in previous convenings to overhaul systems to be more gender responsiveness and to share what good practices they are currently undertaking to make workplaces more accommodating to women. Managers talked about how nurseries which usually accommodate children from 4 months to 4 years have been instrumental in easing women’s participation in the workplace. Women are able to go with their toddlers to work which reduces on absenteeism. Other good practices included providing emergency menstrual products and condoms for workers, instituting and building the capacity of gender committees to ably respond to women’s issues, educating breastfeeding mothers about protection for themselves and their babies given that they work in an environment prone to chemical exposure, and ensuring gender parity in recruitment of supervisors, among many things.

Managers talked about how nurseries which usually accommodate children from 4 months to 4 years have been instrumental in easing women’s participation in the workplace. Women are able to go with their toddlers to work which reduces on absenteeism.

When the conversation shifted to gender and power dynamics on day two, the managers engaged with how power can be used to include/exclude marginalized people especially women, and how they as power holders can dismantle systems that hold women subordinate.. Managers were tasked to do individual analyses of themselves and their environments to see how gender and power play out within their own homes and workplaces. They identified the unpaid care burden that women carry as affecting their level of engagement at work. They were able to see how they had be socialised to accept, rationalise and enforce certain ideologies about what gendered tasks women and men are supposed to undertake in and outside the home.

Some farms for example did not allow women in cold storage rooms, (where harvested flowers are usually kept before transport) because it was believed that the temperatures were too cold for women to handle. Women were therefore not hired for those positions and because they were absent in those positions, it there became a widely held fact that it was a job women could not do. This perception was broken when other farms revealed that women are indeed employed in cold storage rooms. They are simply provided with warm protective gear, in the same way the men are. Another myth about gendered labour that was debunked was that it was only women who could work work in the packhouse, grading and sorting flowers because of their “soft” touch. A field visit to a nearby farm showed a packhouse filled with men who were doing the job more than capably. In short, participants learnt that ideas that shape people’s beliefs and what value they assign to certain things need to be constantly questioned if change is to happen.

Women were therefore not hired for those positions and because they were absent in those positions, it there became a widely held fact that it was a job women could not do.

On the last day, in light of the learning and sharing, the managers developed further action plans that they would undertake to make workplaces more gender responsive. Some of the plans include but are not limited to; undertaking a gender audit to identify existing gaps; construction of daycare centres—a commitment made by at least 3 farms, review sexual harassment policy and undertake gender consciousness training for farm workers and management. We are excited to see the changes that shall take place over the next months.