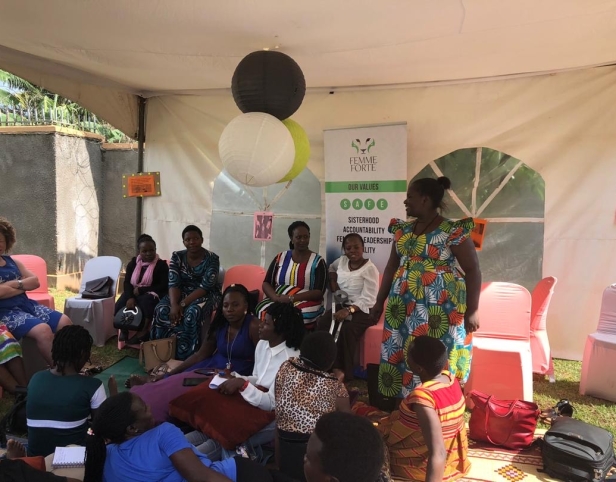 When it comes to violence against women and girls, it is important not to lose sight of the fact that women with disabilities often suffer double catastrophe. Frequently abandoned, women with disabilities are vulnerable to sexual abuse and while most women are no stranger to one of patriarchy’s ugliest faces in the form of sexual abuse, women with disabilities are further disadvantaged by the physical, sensory and intellectual constraints they face in limited mobility and barriers in communication exacerbated by social perceptions that they are weak and in some instances asexual coupled with social exclusion. In the midst of this isolation and social stigma, they are further denied access to justice when their experiences of violence are erased both in reporting and in designing interventions against the vice.

The above and more was confirmed at a safe space convened on 17th October by Akina Mama wa Afrika in partnership with Femme Forte Uganda and the National Union of Women with Disabilities of Uganda (NUWODU) supported by Urgent Action Fund-Africa for differently abled women in Uganda. Over 30 women assembled to reveal the different manifestations of sexual harassment in their lives, at their workplaces and in public spaces. As a step towards their healing journey, a psychologist was provided to support any woman who needed to speak to a professional.

Sexual harassment for women with disabilities is very common. Many times, we are blamed for allowing it to happen. I am happy that we are here to talk about our experiences. – Susan Aciro, NUWODU

The conversation was kick-started by Florence Ndagire, a visually impaired human rights lawyer and activist who guided participants through the constitution of sexual harassment according to the Employment Act, 2006, as well as its manifestations.  Sexual harassment was defined as any nonconsensual sexual act usually displayed in the form of rape, groping, emotional blackmail, revenge porn all stemming from unequal power relations between women and men. Quid pro quo, sexual favours in exchange for rights was established as the most common form of harassment at the workplace for women with disabilities. Ms. Ndagire further stressed that non-consensual sexual conduct is a human rights violation recognised by the International Labour Organisation (ILO).

Whether you have a disability or not, men use their power to harass women. Nonconsensual sexual conduct is a human rights violation recognised by the ILO – Florence Ndagire

Ms. Ndagire went ahead and shared her experience of harassment at the hands of her lecturer while at the university where she was threatened with a retake at Makerere University unless she had sex with him. In sharing her story, she hoped that participants would be encouraged to speak out and break the silence they had for so long buried deep. She also demystified some of the myths surrounding women with disabilities as being asexual, virgins or havens for the cure to HIV that are common place in society. In grueling and eye-watering details, one by one participants relived their worst nightmares of being raped on days such as the International Deaf Awareness Week, International Day for Persons with Disabilities and White Cane Day which are meant to celebrate persons with disabilities to sexual exploitation by family members and caregivers.

I applied for funding for my business in an organization and was told to first have sex with the accountant in order to get it.  Despite agreeing to his sexual demands, I only received half the funding. – Participant

I went for an eye check-up and the doctor took advantage of the fact that I can’t see to grope me. At a different time, I visited the gynaecologist who inserted his penis into my vagina instead of medical equipment. –A visually impaired participant

On and on they went, narrating experiences of being locked up in offices and assaulted because being unable to hear or speak, no matter how loud they shouted for help, no one came to their rescue. Another told of a time she stoned her attacker to protect herself and when a crowd gathered to ascertain what was going on, she failed to communicate that she had been sexually harassed because she could not speak to them and neither could she hear what they were saying. In some circumstances, some gave in if it meant that it would take the burden of being harassed continuously harassed away.

With many asking for lasting solutions, the conversation was steered towards developing avenues that would ensure that differently abled women who suffer any form of sexual injustice access quick and effective justice. Majority of the women in the space called for increased awareness of sexual and gender based violence among persons with disabilities citing that many differently abled women are unaware of what sexual harassment is and have been socialized to appreciate the mere act of being noticed by men. Those who have been able to get employment consider themselves lucky and will not do anything to jeopardize such opportunities even when it involves reporting perpetrators. In closing, women’s rights organisations were challenged to design more activities for differently abled women to equip them with the tools to advocate for themselves against sexual harassment at work and community level.

Statement on the Continued Harassment and Arrest of LGBTIQ Persons in Uganda
#CSOToo: Women in the Civil Society Organisations in Uganda Call for Improved Solidarity with Survivors of Sexual Violence
Silencing our Fears and Fearing our Silence at the Uganda Feminist Forum 2019