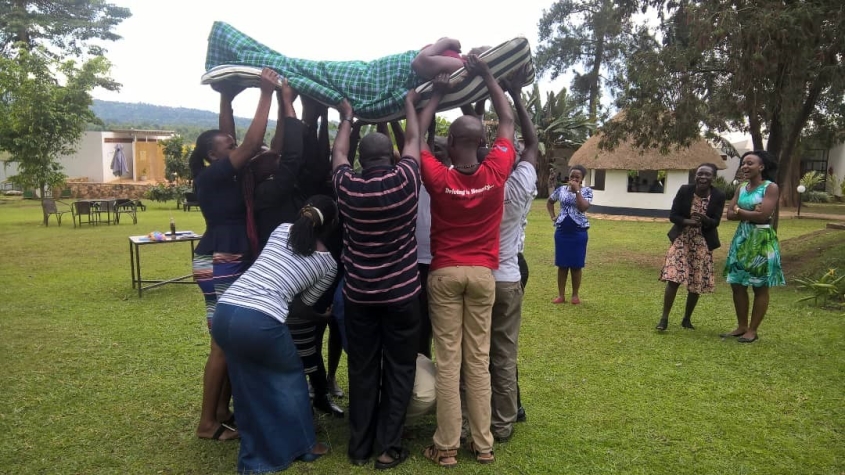 Today’s global challenges require leaders with diverse skill sets and innovation that can only come from diverse ideas and players. Akina Mama wa Afrika (AMwA) through her flagship programme the African Women’s Leadership Institute (AWLI) supported Action Aid International Uganda in strengthening the leadership capacities of her staff in a five day training that brought together 31 female and male staff from various districts in Uganda. The training that took place from 12th to 16th November in Mbale, Uganda, sought to build a wider constituency of feminist leaders who will be able to articulate injustices in society and lead with great acclaim to overhaul the structures and systems that have for long hindered the advancement of marginalized groups.

The training covered four modules of our African Women’s Leadership Institute of Movement building namely; Feminist theory and Practice, Understanding My Human Rights, Movement Building and Transformational Leadership which express the need for personal development to strengthen collective organizing. As with all AMwA’s leadership trainings, the training adopted a participatory mode where group work was employed as well as using creative ways of delivery such as the use of videos which generated discussion and enabled participants to reflect and apply the content of the training to their personal and/or Action Aid’s work.

Realizing that a movement cannot be built without a strong compelling vision, the training commenced with the module on movement building which emphasized the need for collective organizing to achieve a common goal by participating equally, taking leadership and initiating transformation and justice in the organisation and communities. The discussion revolved around what movements are and the principles on which movements are built as well as the different tactics employed in movement building. Participants analysed the Spectrum of allies tool which in movement building is used to identify the various players, their positions and plan strategically to achieve the desired goal. To further inspire the trainees, Wangari Mathai’s vision, “Taking Root”, was showed where participants appreciated that not all movements are violent.

Because feminism is constantly scoffed at, it is important that any feminist movement gains a full understanding of what feminism is, in relation to power and patriarchy. The concept of feminism was introduced to participants to enable them develop an understanding of what patriarchy is and consequently be able to identity it. Delivered by our Research, Advocacy and Movement Building Manager, Ms. Leah Eryenyu, the trainees were able to understand that feminism exists to confront patriarchal power that revolves around the domination of men in political, economic and social spaces and the subordination of women. To make a link between Feminist theory and how it relates to the participants’ lived realities, the trainees watched Chimamanda Ngozi Adichie’s “We should all be feminists’.

I’ve learnt that people make culture and that culture does not make people and therefore it is people’s responsibility to change culture that is harmful.  – Participant

Ultimately, the basis for women’s human rights is the argument of human dignity. Participants were provided with relevant tools to enable them understand human and women’s rights better and be able to link them to attaining feminist goals. The notion of women’s human rights was described to the trainees highlighting the fact that women’s human rights frameworks provide a lens that allows us to look at the problems that women face and to the centrality of women’s experiences in economic, social, political and environmental issues. Not only does a human rights framework provide common ground for developing a vast array of visions and concrete strategies for change, it also equips movements with a way to define, analyze, and articulate their experiences of violence, degradation, and marginality.

To be able to inspire oneself and others towards the achievement of a common goal, a person must have the courage to be. The transformative leadership module aimed to enhance the leadership abilities of the participants by providing them with knowledge and skills and expose them to various leadership styles. The module esteemed the need for feminist leadership as compared to patriarchal leadership which capitalizes on power over. While delivering the session, Ms. Eunice Musiime, AMwA’s Executive Director, underlined the four components of transformative leadership namely; idealized influence, inspirational motivation, intellectual stimulation and individualized consideration.

30 young women graduate from the 7-week virtual Feminist and Transformational Leadership Fellowship 2020
Building a Community of Sisterhood with the Uganda Feminist Forum
#MeToo?: Building a movement to end impunity on sexual gender based violence in Uganda