Home Alumna Breaking the Silence around sexual and gender based violence among teenage mothers in Serere district, Uganda 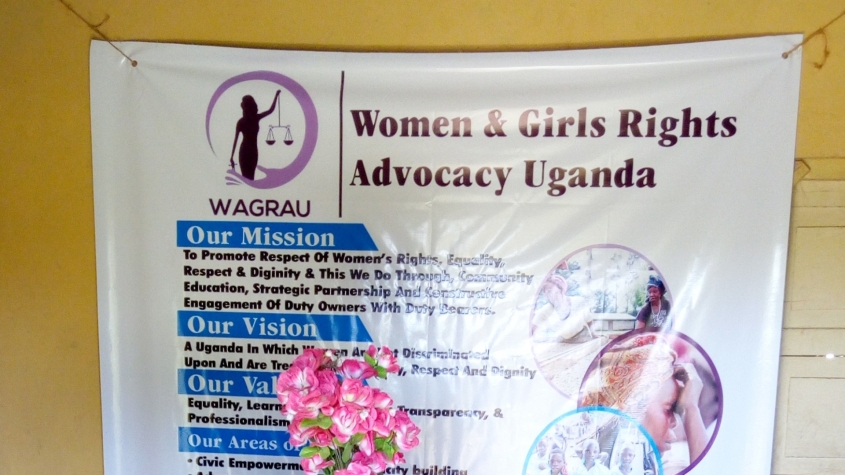 The TuWezeshe Akina Dada Young Women’s Leadership and Empowerment Movement is a three year women and girls’ rights project funded by Comic Relief’s Common Ground Initiative. With the majority of women affected by some form of gender based violence, and with African women at risk of specific harmful practices and norms, TuWezeshe Dada aims to improve the rights and amplify the actions of young African women in their fight against all forms of gender-based violence. We caught up with Debbie Akello, a young lawyer and TuWezeshe 2018 fellow who shared about sexual violence in her community and how she is speaking out against the vice. Here is how she is tackling one of patriarchy’s ugliest forms – sexual violence – in her community.

Why do you do what you do? Why women? Why wake up early to work for no pay?

These and more are questions cast my way each and every day. Why do I advocate for women’s rights yet I carry stellar university grades indicative of a brilliant attorney who has forfeited a great future defending and closing deals for good commissions? Make no mistake, I take no offense when asked these questions, in fact I am always excited to respond and herein lies my answer.  Save for the fact that I suffered sexual abuse without justice and fighting for the rights of young women who have suffered the same is my way of attaining justice, here are more reasons. In my first 10-14 years on earth, no one told me that I was capable of being anything that I wanted to become. No one mentioned that it was alright for me to dream and that all I needed was to work hard towards achieving those dreams – that as a girl child, I had the same potential as the boys in my class. I was often told to act as a woman, to learn how to take care of a man and children, to learn how to cook, wash, dig and host in-laws. I was told that a real woman is one who is married, has many children and endures abuse from her husband.

But perhaps the most dehumanizing thing I was told was that I was under a curse, that since my mother and elder sister had gotten pregnant at a younger age, I was going to be just like them, that it was a generational curse, a myth that did not recognize the numerous women and girls who carried unwanted pregnancies because they were not fully aware of their sexual and reproductive health rights and to whom bodily autonomy had been denied.

I set up Women and Girls’ Rights Advocacy Uganda (WAGRAU), a nonprofit Organization that works to ensure that there is protection, promotion and respect of girls’ and women’s rights and dignity at a point where my bitterness, anger and passion for revenge towards my abuser was channeled into a desire to support women and girls who had gone through similar experiences. At the time, I was in my second year at Law School. During my internship at the Magistrate Grade 3’s court, I witnessed the plight of a 7 year old girl who had been raped by her grandfather and to whom bail had been approved. I used my privilege as a lawyer to speak out in opposition of the bail to the Judicial Service Commission which revoked the bail. Since then, I have never looked back in advancing the rights of women and girls who are always abused or in danger of abuse in the formally war affected region of north eastern Uganda especially in my home district of Serere. WAGRAU was born as a result of the high number of cases of sexual violence that needed urgent redress as well as the increasing rates of violations against women that were either unnoticed or unpunished thus denying the survivors justice.

WAGRAU was officially registered in 2017, and works on ensuring inclusive participation of women in influencing the decisions that shape the affairs of their families, communities, life and generally contribute to a wider social development. We also endeavor to equip women with technical and leadership skills that shall enable them take up active roles in business and governance thereby defying the narrative that a woman’s place is in her kitchen and child bearing but not economics and leadership. Currently, we shelter 2 of the 15 teenage mothers in our care. The young women are equipped with skills in tailoring, soap making, weaving baskets, growing mushrooms, and hair dressing that will empower them to sustain themselves.

Impeding our growth, are a number of challenges chief of which is resource constraints as a young organization, located in a rural area. As a result of this, we lack the necessary infrastructure for the smooth running of the organization. The house that shelters the two girls in our custody belongs to my mother. We are unable to support staff and therefore rely on volunteers. We have also faced a backlash from society which does not believe in the advancement of women’s rights due to patriarchal beliefs. Despite this, I believe that WAGRAU will be the first women’s rights organization in the region with offices within the communities thus ensuring not only direct contact but also reliability, availability and participation of women at the grass roots and will be an organisation serving a community of over 100,000 women.

I find fulfillment every day in knowing that I supported another woman to rise up!

Akina Mama wa Afrika supports WAGRAU as the physical host of the organization in Kampala.