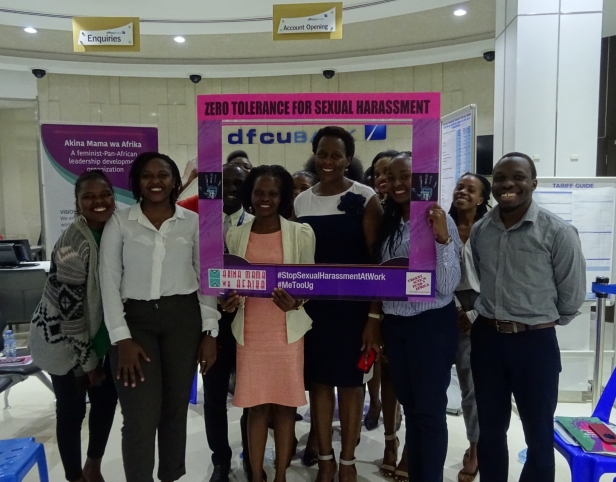 The number of women joining the formal labour workforce in Uganda has steadily increased in recent times. With the right to work comes the right to work free from sexual harassment yet more than ever before, women working in the formal sector continually stand at crossroads, uncertain about whether to endure sexual violence on the job or quit despite their financial demands and desire to grow their careers. The International Labour Organisation through its Convention 190 on Violence and Harassment in the World of Work sets a new standard for women’s rights at the workplace to be respected, protected and fulfilled. It brings both the formal and informal sectors under its purview and acknowledges both on-site and off-site instances of sexual harassment.

The conversation was facilitated by Ms. Ophelia Kemigisha, a feminist lawyer working with Chapter Four Uganda. The discussion was interactive as participants defined what sexual harassment meant to them which included unwelcome and repeated sexual advances causing distress, coercive intention and unwelcome touches. Specific examples such as one where a participant felt that she was being watched by a male colleague every time she was in the same room with him were also shared. Preferential treatment was also cited as a form of harassment where women are treated favourably in exchange for sexual favours. Other forms shared included uncomfortable comments as well as being set up for dates without consent.

Does it amount to sexual harassment if it happens outside the work place? – Participant

During the discussion, the process of handling sexual harassment cases by the human resource department was explained. According to the department, when a person files a complaint, an investigative unit collects evidence which is shared with the human resource office which consequently calls for a disciplinary hearing for the alleged perpetrator. The disciplinary panel is composed of members from the legal, risk and internal audit departments. A concern was however raised about whether all staff members were aware of this process and if the bank had a sexual harassment policy at all. As said by staff, they have previously hardly reported abuse because of the fear of consequences and the dragging on of the process in its entirety along with the fear of judgment and being labeled problematic by colleagues.

At the end of the conversation, the human resource department committed to publicizing reporting mechanisms, holding focus group discussions for each department, identifying contact points at the other branches of the bank who will be accountable to the headquarters, dedicating a full week to sexual harassment awareness, conducting an online survey to establish the extent of harassment in the workplace and revising the current sexual harassment policy to make it more comprehensive.