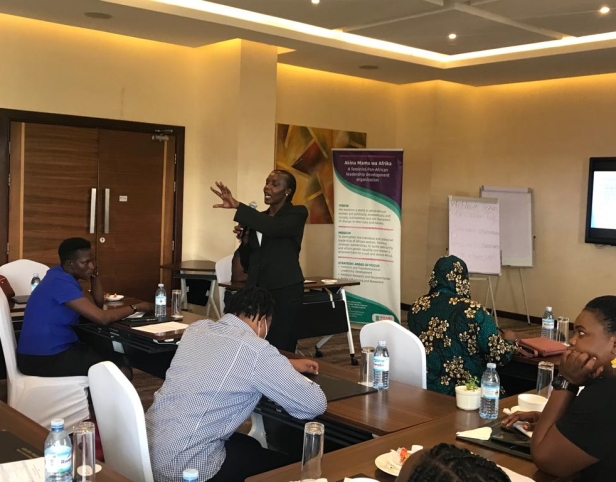 As part of our efforts towards having inclusive governance in Africa, Akina Mama wa Afrika (AMwA) in partnership with the Netherland Institute of Multiparty Democracy (NIMD) under the Power of Dialogue Programme facilitated training on Lobby and Advocacy for 30 youth leaders in the political and civic space in Uganda. The training took place on the 1st of April 2022, at the Golden Tulip Hotel in Kampala. The youth leaders were drawn from the National Youth Council and they included women and youth from five selected political parties namely; Democratic Party (DP), National Unity Platform (NUP), National Resistance Movement (NRM), Peoples’ Progressive Party (PPP) and Forum for Democratic Change (FDC). The objective of the training was to strengthen the capacity of the youth and women leaders in lobbying and advocacy that can translate to democratic governance and feminist policy alternatives. 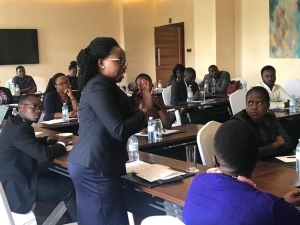 The session on advocacy and lobbying was facilitated by Hon. Monica Amoding, an activist who has served in several political leadership roles at the national level. Hon. Amoding has served as a member of parliament for Kumi District, a youth member of parliament, and a chairperson for the Uganda Women Parliamentary Association (UWOPA) & Youth Forum at the Parliament of Uganda. She shared her wealth of knowledge in activism and lobbying for systemic change. She urged the participants to not think attaining political power or offices was the ultimate but to use their political positions and power to spark needed change in the country.

During the training, the participants shared the challenges they encountered while navigating political leadership spaces. Some of the emerging issues were patriarchal structures of leadership that limited the meaningful participation of women and the youth.

“We have great gender-inclusive policies in place, but putting them in practice is another matter altogether,” said one of the participants.

Another emerging issue was the lack of sufficient funding both on a national level and a political party level for youth leadership activities which meant that youth leaders’ scope of activism was limited. Women leaders also spoke about sexual violence that is often used as a tool to intimidate women navigating the political space.

“If you are a very vocal woman and they want to disarm you, they will sexually abuse you to demoralize you” submitted a participant.

Following this discussion on challenges, the facilitators, Hon. Amoding and the head of programs at NIMD, Primus Bahiigi, guided the participants through identifying opportunities within the lobbying and advocacy space as well as creating an advocacy strategy and developing a successful campaign. Another participant, a young leader from the National Youth Council, Nassuuna Clare, working toward economic justice submitted that the training opened her eyes to the fact that the laws and policies we enjoy are a result of activism from laypeople. She acknowledged that the knowledge and skills she has acquired from the training will be used for economic justice advocacy.

“Running for political office is expensive, so after this training, I am thinking of taking a different route where I practice my activism outside of the political office using these skills and strategies that I have learned today,” Nassuuna says.

In Uganda, despite women and youth forming the largest percentage of the population, the political process has largely been dominated by men in mainstream leadership. This has left women and youth on the periphery of decision-making spaces which has resulted in many of their challenges going unaddressed. Akina Mama wa Afrika’s goal is to raise the consciousness of youth leaders in intersectional leadership and strengthen their capacity for advocacy and lobbying. This training enabled us to achieve that and contribute to creating an environment where the voices and needs of marginalized people are well-represented in political spaces in Uganda and largely in Africa.