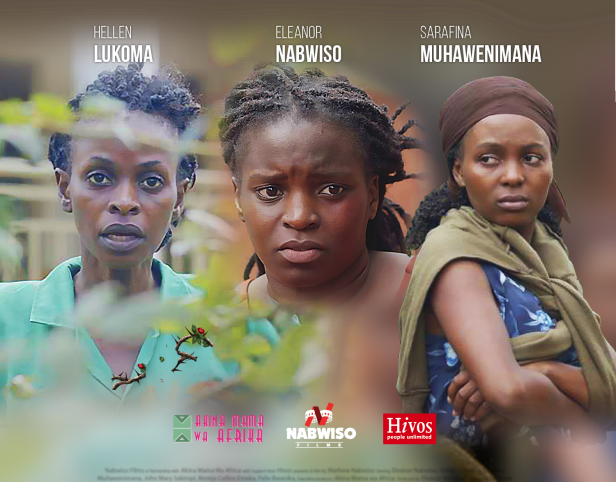 Kampala, Uganda— Akina Mama wa Afrika (AMwA) is taking over the cinema today with a public screening of the much anticipated film, Prickly Roses. The film produced in partnership with Nabwiso Films, with support from Hivos dramatises the experiences of women working on flower farms. It follows their journey of struggle as they navigate issues of inadequate social protection, meagre wages and cases of sexual harassment at the workplace, a glimpse into the numerous oppressions that they face, compounded by the unfair experiences faced back home as a result of gendered roles and demands of their families, communities and societies.

The floriculture sector in Ugandan employs up to 60-75% women who endure the larger burden of weeding, harvesting, packing and labelling flowers most of which are grown for export marking the sector as a strong foreign exchange earner and creator of jobs. Monthly salaries for permanent workers range between UGX 90,000 (25 USD) to UGX 300,000 (82 USD) for an average 50 hour work week. This remuneration remains insufficient to cater to the workers’ basic needs leaving them quite vulnerable. Also, although the industry has made significant progress in ensuring security and safety in the workplace, a number of employers have been found to be in violation with some workers having little or no protective gear. The issue of sexual harassment also remains pervasive especially at the point of entry into employment and negotiating for fair wages.

In spite their significant contribution to the economy and the obstacles they face, the stories and experiences of the women holding up this industry remain largely unknown. The star studded feature is being released in time for Valentine’s Day to ignite public discourse about the labour conditions of women working on flower farms and other low cadre jobs such as domestic work, market vending and other sectors. By using the creative arts, our expectation is that change in policy around working conditions of women towards the realization of decent work will be achieved. Although the film focuses on the Ugandan experience, a lot of these stories are shared across Kenya, Rwanda and other countries where flowers are grown for export.

In light of the above, we urge:

A link to the trailer is provided here: https://www.youtube.com/watch?v=TKv2QKZ9Dek&feature=youtu.be

Akina Mama wa Afrika is a Feminist Pan-African leadership development organization that aims to strengthen the individual and collective leadership of African women, forming strategic partnerships, to tackle patriarchy and attain gender equality and women’s empowerment for a just and secure Africa.

The Women@Work Campaign is an initiative by Hivos that seeks to propel decent working conditions for women who earn their living in global production chains most notably flowers, fruits and vegetables grown for export. The program is implemented in 8 East and Southern African Countries.